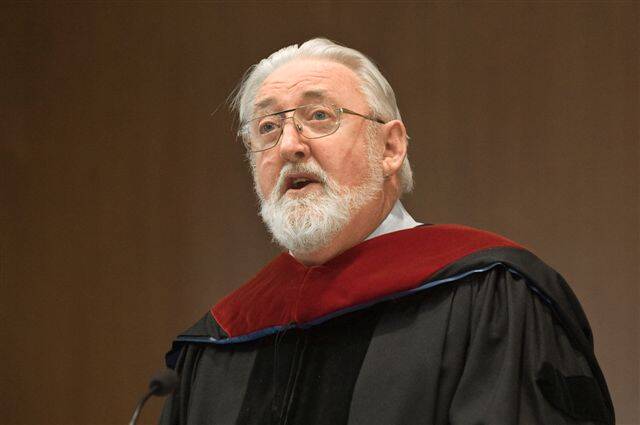 There was no blarney or bluster in Jerome Murphy-O’Connor’s classroom unless it was coming from him. I saw this first hand when I had the privilege of being his student at Fordham University in the summer of 2007 for a seminar entitled “Events in the Life of Jesus.” On the first day of the class a student asked for clarification on the pronunciation of the Galilean fishing village known as Capernaum. Our esteemed Dominican professor had been pronouncing it with the accent on the first syllable—CAP-er-naum. But most of us were accustomed to saying Cap-ER-naum. Murphy-O’Connor, a proud son of Cork, asserted that the latter pronunciation was the way the British said it, and therefore should be avoided on principle! His death on November 11, at his home, the Ecole Biblique in Jerusalem, marks the loss of one of biblical scholarship’s titans.

Murphy-O’Connor, standing over six feet tall with distinguished silver-grey hair combed straight back, face accented with a white beard, could be exacting in the classroom—a dropped pencil during his lecture would draw a rebuke. But his stringency was rooted in his passion for the subject. Like his mentor, the great biblical scholar Ernst Kasemann (who famously held his Tubigen doctoral seminars in a bar), Murphy-O’Connor believed that scholarship should be rigorous, and in the service of preaching the Gospel.

Murphy-O’Connor was a passionate advocate for historical Jesus research. “If the Gospel is not rooted in history, it is nothing. It must be rooted in the historical Jesus. Authentic theology is the interpretation of history,” he told us. Otherwise, what we have is no better than “the speculative musings of the Greeks.”

Murphy-O’Connor did not suffer cavalier or sloppy scholarship lightly. Once a student asked about the Jesus Seminar (the association of scholars dedicated to a “reconstruction of the historical Jesus.”) Murphy-O’Connor didn’t have much esteem for this group of researchers. “Only scholars, mostly junior, who already agreed with the conclusions of the Seminar’s founders were invited,” he said. The student followed up with, “who wasn’t invited who should have been?” Murphy-O’Connor’s reply: “Me!”

Although Murphy-O’Connor was trained at the world’s premier theological institutions, including the Universities of Fribourg and Tubigen, as well as the Pontifical Biblical Commission, nearly 50 years of living in the Holy Land inspired his greatest insights into the New Testament. He embraced the culture and history of Palestine with a native’s affection. The Fifth Gospel (what students of the Bible often call the Holy Land) suffused and illuminated his teaching and writing.

For example, Murphy-O’Connor’s article on the relationship of Jesus and John the Baptist (Bible Review, 1996) was colorfully informed by the author’s treks on the dusty but “pleasant” walk from Jericho to the place at the Jordan where John was baptizing. Our exegesis seminar on Mark 6, the feeding of the multitude, was enriched by Murphy-O’Connor’s observation that this event took place in the early Palestinian spring, because that is the only time one will find the “green grass” of Mark 6:39.

Murphy-O’Connor’s essay “What Really Happened at Gethsemane” (Biblical Archaeology Review, April 1997) was a tour de force of exegesis and intuitive insight. The anxiety and abject fear evinced by Jesus as recorded in the gospels were dramatically contextualized by Murphy-O’Connor’s observation that one must pass through the Kidron valley to access the Mount of Olives. That valley was—and still is—occupied by a large cemetery.  Seeing the tombs and monuments in the light of the full Passover moon would have made Jesus keenly aware that his time was short. “Weighed down with apprehension, the sight of the tombs lining his route forced the thought of death from his head to his heart.”

Murphy-O’Connor’s works on Paul were recognized as his greatest contribution to modern biblical scholarship. Paul: His Story, Paul the Letter Writer and Paul: A Critical Life showcased his his ability to bring soul to scenes and characters long faded into history. Especially compelling was Murphy-O’Connor’s treatment in St. Paul’s Corinth of the strife that accompanied the Corinthian Eucharistic gatherings described in 1 Corinthians 11:17-34.  Murphy-O’Connor’s on-site research revealed that there were practical considerations in addition to an unfair distribution of food and drink that fueled the troubles in that fractured church. His archaeological surveys, measurements and reflective observations revealed that whenever the Corinthians attempted to gather as a whole, those lower in social rank than their host were forced to sit in the atrium of the house church. Meanwhile, the well heeled were welcomed into the triclinium, or main dining room. While the triclinium could be heated, the atria of ancient houses had large holes (compluvium) in the roofs. Murphy-O’Connor deduced that those sitting outside the heated room would be exposed to the cold air coming down from Mount Parnassos, which is snow-covered for nine months of the year. Pity those who had to sit in the cold while their host and his wealthy friends got drunk!

Jerome Murphy-O’Connor’s final years saw him ailing, but still deeply committed to his work. Despite his confinement to a wheelchair and reliance on an oxygen machine, he reportedly kept to his disciplined daily schedule of writing, research and prayer. Nor did his good humor and hospitality diminish. Just a few years ago, an acquaintance of mine who had read a number of Murphy-O’Connor’s books, but had never met him, cold-called Murphy-O’Connor at the Ecole-Biblique while on a visit to Jerusalem. The booming Irish voice came on the line “Hello?!” An invitation to dinner and a delightful conversation followed.

Most New Testament scholars dispute the Pauline authorship of the second letter of Timothy, but not Murphy-O’Connor. Over lunch one day during a summer session at the College of St. Elizabeth in New Jersey several years ago, he told me, “The arguments which are used to dismiss the authenticity of first Timothy cannot be used with second Timothy.” Then with a twinkle in his eye, he said, “Paul is doing in that letter what I do all the time—he’s looking back over a life well lived!” Now whenever I think of my old professor, I’ll always associate him with Paul’s words from 2 Timothy 3:7 “I have fought the good fight, I have finished the race, I have kept the faith.”

Brian B. Pinter is the director of campus ministry at Regis High School in New York City.

Brian B. Pinter
Show Comments (
1
)
Comments are automatically closed two weeks after an article's initial publication. See our comments policy for more.
ed gleason
8 years 2 months ago
He was 78.... '''born 10 April 1935 in Cork in Ireland as James Murphy-O'Connor, died 11 November 2013 in Jerusalem) was a Dominican priest