Your brain on prayer: what science says about happiness, prayer and neural development 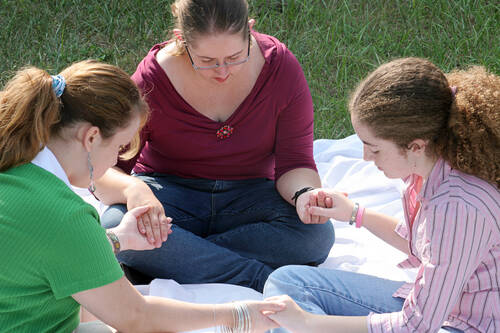 Last week someone pointed me to this fascinating article on the implications of brain science for happiness. “Synapses that fire together wire together,” author Steven Parton writes; that is to say, our reactions to stimuli create paths between synapses in our brain. And the more we repeat a reaction, the more we strengthen the bond between those synapses.

So, to put it paradoxically, the more we respond in a certain way, the more likely we are to respond in that way. Says Parton, “Your thoughts reshape your brain.”

But Parton finds within the science an “easy” road to greater personal happiness and goodness. Want to be someone who worries or procrastinates less? he asks. The next time you are faced with decision to do either, try something else. It doesn’t need to be “smart,” “mature” or pre-planned. It could be random as laughing instead of worrying or humming a little song.

Because here’s the other crazy-cool thing about the brain: it’s like Silly Putty. It remains flexible throughout our lives. That is to say, no matter how many times we’ve reacted in one way, no matter how strong the path we’ve forged between two synapses, the brain remains always open to forging new paths.

So if when faced with possible conflicts you choose acceptance or a smile rather than say, belligerence, your instinctive reactions can actually begin to change.

And it got me thinking about prayer. One of the gifts of being a Jesuit is how much it’s helped me to develop a personal relationship with God—that is, to have a felt experience of God as a presence in my life, a friend that I can lean on. That’s not to say there aren’t days (okay, weeks) (okay, months) when it feels like’s the Big G has taken a long and unannounced vacation.

It’s also not to say we have actual he says/she says conversations. It’s more like sometimes when I’m quiet I feel as though God is there, with me, in the midst of all my mistakes and fears.

Some might write such a relationship off as crazy and/or just stuff that nuns, priests and brothers can do. #CatholicSuperPowers

But what if it’s really about what we each do with our brains? Twenty plus years of retreats, daily prayer, etc., spent trying to listen, trying to be open to the presence of God in my life means some pretty deep pathways are quite literally grooved into the old noggin at this point. Someone else, who spends their time mostly talking to God or reciting prayers has molded their brain in a different way. And consequently, their default relationship with God is different.

But again, what brain science tells us is that our defaults really can change. You don’t have to be particularly religious or educated to have a personal relationship with God. You just need to be willing to try some new things—like reading stories from Scripture and let them play in your imagination; paying attention to the world around you and try to savor what you hear and what you see; or just sitting in the dark and being present as you breathe.

In other words, fumble around, be patient, listen a little every day, and we can forge new paths for the Holy Spirit to travel. And like Rainer Maria Rilke writes, someday, “gradually, without noticing it,” we can each find our way into the relationship with God that we seek.

Jim McDermott
@PopCulturPriest
Show Comments (
6
)
Comments are automatically closed two weeks after an article's initial publication. See our comments policy for more.
Monica Doyle
6 years 4 months ago
If this was on Facebook I would tap 'Like'.
ed gleason
6 years 4 months ago
I like it too. I recentlly worked about a similar path for virtues. We can examine what are our deficits and what are our virtues. My deficit was generosity and . another deficit was patience. I paired generosity with a virtue I always was proud of = courage So pairing generosity with courage created a synergism, somewhat like the 'synapes fire together bind together/ being strenthened' Also I paired patience with my virtue of love for simplicity. Frequent prayers/thoughts about these pairings seems to be working.. .
William Rydberg
6 years 4 months ago
Friend of God, What a shame. It seems that the proverbial "lock" is on the door to the ginormous library of Catholic Resources manifest in the (lowball estimate IMHO) hundreds of thousands of Catholic Authors, famous, not so famous, Saints, and not canonized saints that have written on this subject over the millennia (many in fact were Jesuits). Instead, we have to "dine" on scraps like the above link in my opinion. Hoping as it were that some "secular" savant, (perhaps a follower of scientism as is the case to the link here) has an epiphenomenon of the brain, that provides the "winning conditions" to permit some soporific about prayer along with some perfunctory reference to "scripture". Why don't you unlock the door to our Catholic Library? Try Catholic Truth, be not afraid, I know that you have the skills, and besides, you'll like it Bro... Dine out on the Rich Catholic resources available... How to begin... Start with North Americans...Fulton Sheen's television material (not so much what he said, but rather his Footnotes; another is your colleague Mitch Pacwa-not so much what he has written, but the resources he recommends. And finally, Dorothy Day (like F. Sheen, not so much what she said, but rather her footnotes). Then move on from there... Confirm first, that it's within the framework of the Work. Then "Sign on" with the Trinity, for you will be in for a supernatural (Catholic meaning) Royal Ride... Just my opinion, in The Risen Christ,
Anne Chapman
6 years 4 months ago
Great essay. Twenty plus years of retreats, daily prayer, etc., spent trying to listen, trying to be open to the presence of God in my life means some pretty deep pathways are quite literally grooved into the old noggin at this point.I think that's why I see so much transformation among those who practice Centering Prayer or another form of christian meditation for many years. The practice of sitting in silence, achieving the inner quiet we need to hear the whispers of God, eventually changes our brains in some way. Most of the most christian (Christ-like) people I know have practiced CP for many years.
Erica Smith
5 years 11 months ago
How does this work for people who have experienced emotional trauma? I have read that trauma, particularly in childhood, physically changes the brain and nervous system. I can't tell if the author (Steve Parton) of the referred article is a scientist who has done actual research, or if this is more a "I've observed people who have been able to do this" kind of thing. I ask because I am working with people who have experienced trauma and am always looking for ways to help them.
Victoria McGee
5 years 10 months ago
There is information on prayer changing the brain and healing the wiring from trauma in the book "Upside, the new science of post-traumatic growth" by James Rendon.