A controversy erupts after Pope Francis comments on marriage 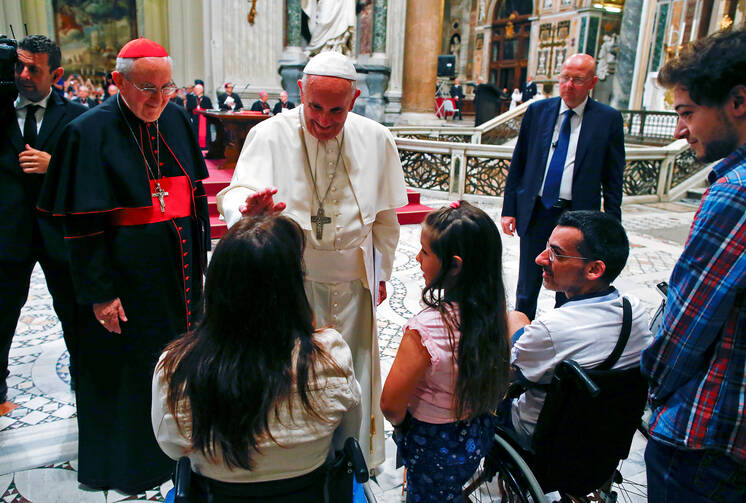 There has been much commotion in the social media in the United States, but not in other parts of the world, over what exactly Pope Francis meant in an off-the-cuff comment at a diocesan conference in Rome on June 16. Responding to a question from a participant, Pope Francis said that “the great majority of sacramental marriages are null” because so often couples do not realize fully what is involved in such a long-term, sacramental commitment.

The Vatican later issued a transcript of the pope’s words but replaced the words “the majority” with the words “a part.” This changes significantly what he actually meant. Father Federico Lombardi, S.J., director of the Holy See Press Office, told America that “the Holy Father explicitly approved this change.” He said it “expresses exactly what the pope meant. It is what he intended to say.” He made clear that “any other interpretation can no longer be justified.”

The controversy was first sparked by a report from the CNA news agency that quoted the pope as saying “the majority” of sacramental marriages are null. Internet commentary quickly revolved around the words “the majority,” without taking proper account of the fuller context of what the pope has said several times on this specific issue. In the past, he has used other expressions such as “many” or “very many” or quoted what his predecessor as archbishop of Buenos Aires had said.

Indeed, from Francis’ past remarks in interviews with various media and during in-flight press conferences, it should be clear that he is referring to a significant number without trying to define exactly what that number is. His use of the word “majority” yesterday, however, led some to conclude that he really meant more than 50 percent.

That is a wrong interpretation, however, Father Lombardi told America. He added that it is “normal practice” whenever the pope speaks without a written text on occasions like this that the Vatican provides a subsequent official transcript of what he said. This transcript can often include the alteration of a word or phrase to clarify exactly what the pope meant. But, Father Lombardi said, all such clarifications are made only after consultation with Pope Francis.

Gerard O’Connell
@gerryorome
Show Comments (
6
)
Comments are automatically closed two weeks after an article's initial publication. See our comments policy for more.
Crystal Watson
6 years 1 month ago
Back in 2014, Cardinal Kasper said that the Pope believed that half of all marriages are invalid ... http://theweek.com/articles/446767/pope-francis-says-half-marriages-today-are-invalid-hes-wrong This seems like a cynical way to make more marriages annulment-worthy so Kasper's intent to have divorced/remarried Catholics go to communion can be realized. It would be more honest to just admit that valid marriages sometimes end in divorce.
ed gleason
6 years 1 month ago
My wife and I did 2500+marriage preparations over 25 years. We agree with Francis. A sacramental marriage needs intention.And many many don't My wife, who everyone confides in, has kept track of the the many spoken reasons for 'marriage in the Church' all too ofen spoken in marriage prep. 1. Grandma won;t attend if it's not in church 8% 2. Golly Gee we are 'doing the Church thing' because we are italian, Irish Polish etc.9% 3. We want the Church venue because daddy's American Legion Hall is tacky 5% 4.We want a pretty Church for the pics and video {Peter and Pauls in SF where Joe Dimagio was married] 15% 5.The Church is only two blocks from the reception place and has parking. 20% 6.No long Mass as our friends want to party !0% 7.We really want it in the park but san Francisco is too rainy/foggy to plan. %5 8 My uncle priest coming from Chicago insists on a Church. 3%. We gave up marriage prep in 2000 when during the faith session, we had the couples break into couple groups to discuss "how are we going to pass on the faith to Children? First group reported that " we will let the nuns do it' Each group said that was their idea too. I started yelling there will be no nuns for their Children five years.from now My wife said to me after that...your'e done we're done. Francis is easy to talk too so he knows about sacramental intent... Some bishops, not so much easy to talk too so they know nada.
Crystal Watson
6 years 1 month ago
I think what the pope was saying was not that most marriages are invalid because people don't have the right reasons for getting "a Catholic wedding" .... he seemed to be saying that they are invalid because people don't want their marriages to be for life. And he's wrong in that belief. The vast majority of people who marry do want their marriages to last forever ... http://www.nydailynews.com/life-style/young-adults-expect-marriage-lifetime-article-1.1135222
L J
6 years 1 month ago
Pope Francis had it right the first time thought it might appear uncharitable. With 50+% of USA marriages ending in divorce, and an unknown percentage of marriages resulting in separation, unfaithfulness, domestic violence, children having deadbeat dads while still married to the mother and so many still married for appearance, it is dishonest that anyone would take offense. We celebrate two USA presidential candidates who have made a mockery of marriage. Hillary, a codependent and enabler of a man who rapes women like Bill Cosby, remains in a marriage to benefit herself, and Trump who boasts about his female conquests during and between spouses. These candidates are a reflection of us, they coddle our fragile egos, they feed our pride and wrath, they the visible figures we and Pope Francis observe. . Pope Francis stated what Americans have forsaken for decades - marriage based on respect, love and commitment, having children (c.f. abortion), raising a sacramental family (c.f. abortifacients), catechesis at home, shunning the Cardinal Sins, embracing the Cardinal Virtues, attending Church and keeping God as the focus of our actions. These are not part of our societal makeup. He called it right. By their fruits you shall know them. May we come once again to keep as our daily focus the mercy God has towards us so that we can act humbly before Him and others and radiate His sacrifical love. Amen.
Crystal Watson
6 years 1 month ago
The pope, who has no experience as a married person, can stand on the sidelines and opine about the perfect marriage, but he has no useful advice about how to ensure such a relationship. Love, respect, and commitment can't be enforced, and all we people in the trenches (married or divorced) can do is try to get it right. As the head of a church that discriminates against women and molests children, he doesn't have much high moral ground on which to stand.
prakash kumar
5 years 5 months ago