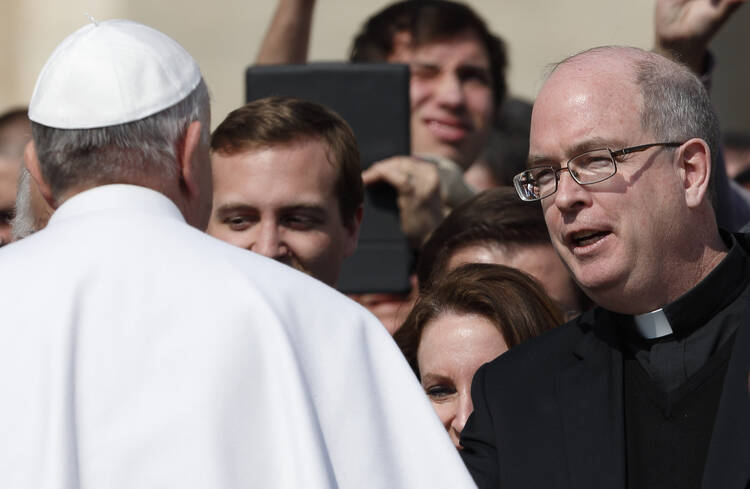 The Vatican has published the Statutes for the Pontifical Commission for the Protection of Minors. This is another important step in the wide-ranging effort by Pope Francis to ensure total protection for every child and minor in all institutions of the Catholic Church worldwide, and to prevent the sexual abuse of minors by priests ever again happening.

The Secretary of State, Cardinal Pietro Parolin, approved them with the mandate of the Pope after the Commission’s president, Cardinal Sean O’Malley, presented them to Francis on April 21. They give this important papal body a formal juridical structure and authority to carry out the mandate the Pope first gave it on 22 March 2014.

At that time, Francis said he had decided to establish the Commission “to promote the protection of the dignity of minors and vulnerable adults, using the forms and methods, consonant with the nature of the Church, which they consider most appropriate, as well as through their cooperation with individuals and groups pursuing these same objectives.”

He explained then that he wanted the Commission “to propose” to him “the most opportune initiatives for protecting minors and vulnerable adults, in order that we may do everything possible to ensure that crimes such as those which have occurred are no longer repeated in the Church.” He also entrusted it with another important task: “to promote local responsibility in the particular Churches, uniting their efforts to those of the Congregation for the Doctrine of the Faith, for the protection of all children and vulnerable adults.”

Since then the Argentine Pope has appointed 17 members to the commission: 8 women and 9 men (only four of whom are clerics). Two are survivors of abuse, and this fact has given the commission considerable credibility, as did his appointment of Cardinal O’Malley as president. He also named a close collaborator of the cardinal, Mgr. Robert Oliver, as Secretary of the Commission, and head of its office which is located in the Vatican, but is not part of the Roman Curia.  Most importantly, the Commission responds directly to the Pope.

The Statutes enable the Commission to do all the Pope has asked of it.  They have been approved for ‘an experimental period’ of three years.

There are six articles, which relate to the following areas: the nature and competence of the Commission; its composition and membership; the plenary assembly; its personnel; the working groups; general norms.  They contain no surprises.

Article 1 focuses on the nature and competence of the Commission.  It states clearly that this is “an autonomous institution attached to the Holy See, with public juridical personality (Code of Canon Law n.116). And since it is “an advisory body at the service of the Holy Father”, it responds directly to him.

That is of crucial importance for its independence and effectiveness; it does not respond to the Roman Curia, nor does it deal with individual cases of abuse as was explained right from the beginning by Cardinal O’Malley.

This first article explains that since “the protection of minors is of paramount importance”, the Commission’s purpose is “to propose initiatives to the Roman Pontiff”, in the ways envisaged in the statutes “for the purposes of promoting local responsibility in the particular Churches for the protection of all minors and vulnerable adults.”

Any proposal presented to the Pope must have the approval of two-thirds of the Commission’s members. But if such proposals also concern “the competence” of other bodies in the Church, then the Commission cannot act alone, it has to consult those bodies. In such cases, the President and Secretary “should consult promptly the offices responsible for the protection of minors in local churches, episcopal conferences, conferences of superiors of institutes of consecrated life and societies of apostolic life” and “the dicastery of the Roman Curia competent in the matter.” It says the consultation “will be shared in a transparent manner with the Commission Members.”

Significantly, the first article gives the Commission power to “require an account of the effectiveness of the work” carried out by those other competent bodies in the Church.  This relates to accountability. It should be remembered that the Commission has already presented a proposal to the Pope on the accountability of bishops; an issue that Cardinal O’Malley said is of primary importance to this body.

Article 2 states that the Commission will have “a maximum of 18 members”, appointed by the Pope for three years. They can be reconfirmed.  The members are to be chosen among “persons of good and proven reputation” with recognized competence in the various fields of relevance. The Pope also appoints the President and Secretary of the Commission for a three year period. They too can be reconfirmed.

Article 3 states that the Commission is to hold a plenary assembly twice a year, but it can also hold extraordinary ones. There are rules governing the conduct of the plenary assemblies, which can be conducted by videoconference too.  (It’s next plenary assembly is scheduled for October).

According to Article 4, the President “is responsible for ensuring the proper functioning of the Commission”, and for directing its meetings. The Secretary’s role, on the other hand, is “to act in the name of the Commission in ordinary affairs”, “to direct” its office, and to promote collaboration with the various bodies mentioned earlier – the local churches, bishops conferences, religious orders and relevant Vatican offices.

Article 5 recognizes that the Commission will have “working groups” which prepare the initiatives that it will propose to the Pope or take at the level of the ecclesial bodies mentioned earlier. The President appoints a moderator for each working group, who may then propose the names of three external collaborators for that particular body.

It should be noted that the Commission has already set up about a dozen working groups, on a wide range of subjects.

The Statutes also address the important question of financial and human resources in Article 6 which states that the Commission will be provided “with adequate human and material resources” to enable it carry out its work.

The same article confirms that the Commission shall operate according to the norms of its Statutes and those of Canon Law, as well as those of the General Regulations of the Roman Curia.  Moreover, it states that all the Commission’s members, staff and collaborators “are bound to observe professional confidentiality with regard to the reports or information which may come to their knowledge in the course of their duties and functions.”

Last but not least, the Commission will have three working languages: Italian, Spanish and English.  It will also have archives in the Vatican.