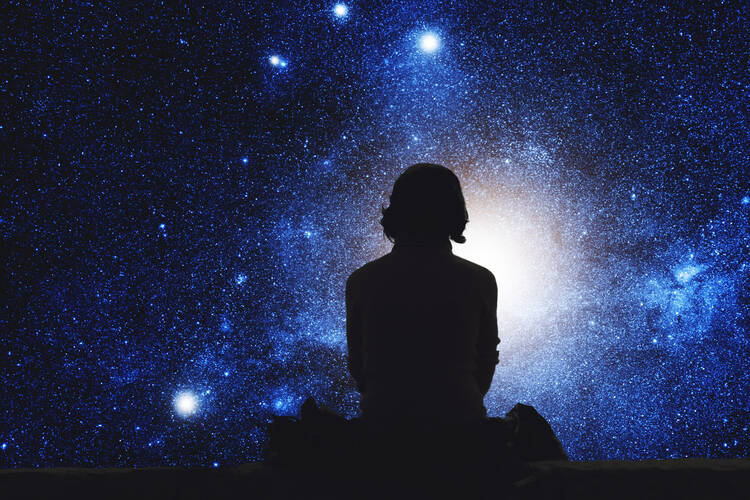 This week Dr. Timothy Law Snyder, mathematician and former vice president of academic affairs at Loyola University Maryland, is being sworn in as the sixteenth president of Loyola Marymount University in Los Angeles, Calif. (where I have lived for the last five years).

One of the many customs of presidential installations is a lecture or series of lectures given by a noted academic. Last Wednesday LMU welcomed systematics theologian Dr. John F. Haught, distinguished research professor at Georgetown University and one of Dr. Snyder’s mentors, to give that talk. Dr. Haught specializes in the intersection of faith, science and cosmology; in keeping with those themes he offered the wonderfully provocative piece, “Science, Faith, and the Cosmic Future.”

The universe, Dr. Haught proposes, is "unfinished business," its hierarchies still emerging. Life, mind—these were not levels of creation present at the start; indeed, Dr. Haught notes, the emergence of life of any kind, let alone thought, is incredibly recent. “The universe was not anxious to produce life,” he remarks. Given this, who can really say where it’s headed?

Our capacity to understand the universe, he notes, is likewise constantly growing. Just as animals have no way of understanding human writing, so our own capacity to comprehend what’s really going on all around us—in particular the spiritual aspect of our existence—is asymptotic: always evolving, never fully there.

So to those who would say the universe is a dead thing, just a physical set of systems with no life or spirit within it, Dr. Haught replies that materialism is just a step in the bigger intellectual and ultimately spiritual journey. And the move of faith to speak in terms of story or analogy does not disqualify it from the conversation, rather it is “the sign of the enormity of what we’re involved with.”

Over the course of a 40-plus year career, Dr. Haught has written many books on these subjects. His most recent is the just published Resting on the Future: Catholic Theology for an Unfinished Universe. Based on his talk, I’d say he is well worth a read. His arguments are engaging, but even more than that are the wealth of ideas to mull over that he scatters as he goes. The universe, he argues, is “on a journey towards infinite beauty”; if we understand it that way, our own purpose must involve contributing to that beauty.

Or, he notes, if the 13.8 billion years of the universe thus far was a set of 30 volumes of 450 pages each, humanity would rate a couple chapters, maybe, at the end of the set. This offers a rich perspective our own place in history. Rather than the stage on which our story is unfolding, the universe becomes the crux of the story, and we just a part. His ideas call forth a humility that is thrilling rather than enervating.

More than anything, though, what I walk away with is the question: Who are we to say what is possible or impossible in the universe, or how life within it is “supposed” to proceed? If 10 billion years ago you had proposed that some day there would not only be life in the universe, but that that life would have the capacity to write the words that you’re reading right now, it would have been as preposterous as the iPhone will be to Julius Caesar when Bill & Ted finally reach him. (“Stay home the 15th of March, bro. Just trust us.”)

Who knows what may come next in the history of the universe? Or perhaps already has come but goes misunderstood due to our still-to-evolve perspectives?

Jim McDermott
@PopCulturPriest
Show Comments (
1
)
Comments are automatically closed two weeks after an article's initial publication. See our comments policy for more.
6 years 8 months ago
The eminent theologian Dr. John F. Haught dealing with Faith and the Cosmos, sees the universe as “unfinished” its “hiierarchies” still evolving. Dabbling in a kind of “Twinkle, twinkle, little star” poetry, I mean something that vaguely resembles poetry, I venture the following post, 100% supportive of Dr. Haught’s “unfinished” Faith-inspired cosmological insights, offering apologies to writers of real poetry! The Father said with zest, “Let’s create!” The Son responded, “Sounds great! A Third Voice spoke like the first Two. And said, “Let Me show Us what We’ll do!” A Big Bang reverberated as nothingness unshackled, The Three in awe listened as creations crackled! Whirling, swirling, in what was now a range of creatures, Melting, melding, molding, all assuming features. Father, Son, Spirit, seeking full solution, Unanimously blessed Their thought and called it Evolution. One concern dangled, who would preserve Their Plan? In conference Triune agreement, “We will, with the help of Man!” Satisfied to know that all would be well amid exploding stars, Spinning orbs, grand new worlds, some with celestial scars. Then sighs of relief, one Triple hug, eternal jubilation, Yes, well engineered cosmology, an ongoing creation! As the song says, "What a wonderful world!" More wonderful, how it all came together! Even more wonderful to realize, It is STILL happening! (BRUCE SNOWDEN)