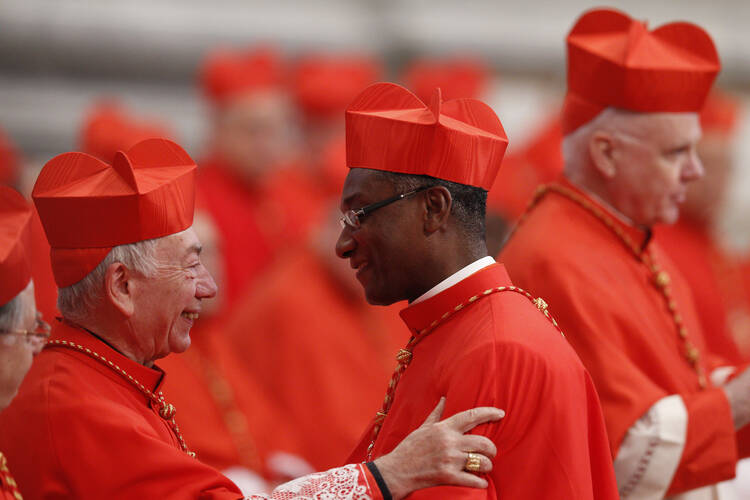 One of the Vatican’s top canon lawyers at the Synod of Bishops on the Family says the current process for the annulment of marriages in the Catholic Church could be streamlined and expanded to the benefit of very many people whose marriages have broken down. This could be one of the positive fruits of the synod, he said, but it would not be approved until the second synod in 2015.

Cardinal Francis Coccopalmerio (Italy) said this at a Vatican press briefing for the media on Oct. 9. His words carry particular weight since, on the eve of the synod, Pope Francis appointed him as a member of the commission that he set up to study the annulment process and to come up with proposals for revision and improvement in this important area. Significantly he is the only cardinal on that body, and he is also President of the Pontifical Council for Legislative Texts.

The cardinal outlined three ways in which the annulments process can be streamlined and improved. But to avoid misunderstanding, he began by clarifying that in the case of an annulment one is not dealing with what the church considers as a valid marriage in the eyes of God, which by its nature is indissoluble. By declaring a marriage null the church is stating that in fact this was never a valid marriage to begin with, “no indissoluble bond was attached.” There can be a number of grounds for this declaration, he said, such as when one or both parties enter marriage but do not accept it as indissoluble, or when one of the parties excludes having children.

He revealed that there have been many calls at the synod to speed up the annulment process, and synod fathers have made a number of proposals for doing so. Based on what was said and on his own expert knowledge of the subject, he identified three ways in which this could be done.

The first way is by removing the appeal process and requiring only one judicial decision in the church’s tribunal. The current code of canon law requires the double confirming sentence by church tribunals before the marriage can be declared null. Today, after the first judicial sentence has been issued declaring the marriage is null, there is an automatic judicial appeal. The church cannot declare the annulment of a marriage until the appeal process has confirmed the first decision.

A second way is by not requiring a collegial judicial decision in cases of annulment. Today it is necessary to have three judges to declare the nullity of a marriage, whereas it would be sufficient to have only one judge for this purpose.

The third way is what many synod fathers described as “an administrative procedure” by which the local bishop can declare the annulment of a marriage “for grave and urgent reasons.” This could happen even in the absence of external evidence or witnesses, when the bishop considers the couple as “credible witnesses” to what was the actual situation in their marriage.

“I am very favorable to this third solution; it is often the only way forward,” Cardinal Coccopalmerio stated. “We must adopt the hermeneutics of the pope; we must adopt the procedure to the concrete situation of individuals for grave and urgent reasons.” He cited the example of what Jesus said in the Gospel regarding the man whose ox had fallen into the well on a Sabbath; he said Jesus did not abolish the law of the Sabbath which prohibited people from working on that day, rather he indicates that action had to be taken here for grave and urgent reasons.

Referring to this “administrative procedure,” the Italian cardinal said, “it cannot become a general norm, but it can be a situation in which the local bishop can decide case by case”

Cardinal Coccopalmerio noted that people have long complained at the length of time it took to get an annulment from the church, as well as the cost involved. Moreover, he said, there are many dioceses in Africa and Asia that do not have tribunals, and so the judicial process is not a viable option there, whereas “the administrative procedure” is workable everywhere.

“If the synod supports this, then we’d get a big result,” the cardinal expert in canon law predicted.

He also explained that the commission established by Pope Francis to review the whole annulment process has held one meeting already, and plans at least ten more. It will not complete its work for some months, and then will feed its findings into the discussion that is to take place in dioceses around the world before the 2015, and its report will also be available at that synod.