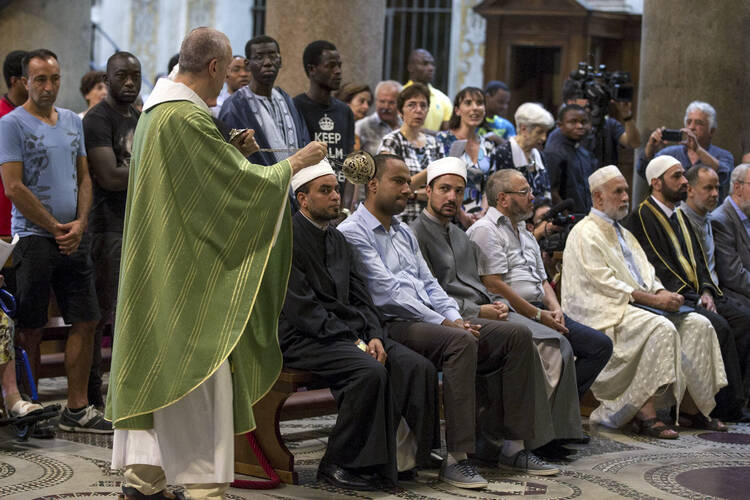 What on earth is happening to us? Optimism isn’t an easy position to embrace these days. Much of our world is currently more broken, more ill-at-ease than ever before. Not only have we in Europe increasingly experienced the sorts of murderous atrocities that people elsewhere have had to live with, and die with, for years; but our public life, both in Britain and the United States, is turning ever more sour, vicious and confrontational.

Dialogue is a sign of weakness to some. The online world leads us back to our encampments, comfortably in conversation with only those of like mind, reinforcing and confirming the views that we already held. We visit the websites or, for those who still read them, subscribe only to those newspapers or magazines that mirror our own opinions and attitudes. And when attitudes become hardened they convert to prejudices, difficult or downright impossible to challenge in any creative manner, still less with generosity.

When that happens, we begin to lose the ability to see that which is not broken, that which remains generous and other-centered, yet, sadly, less newsworthy or sensational. To be a discerning person, a goal for every follower of Christ, is to see and acknowledge that so much is fractured yet resist being dragged down into the morass where we will no longer be able to discern what remains good and true, where we have lost the ability to distinguish the superficial from the relevant.

The martyrdom of Father Jacques Hamel, an elderly priest in northern France, is shocking by any decent standards. The young adults who committed the murder, slitting the throat of the 84-year-old priest as he celebrated Mass, claimed allegiance to the Islamic State. Similar claims are made in other parts of the world that have witnessed other atrocities, just as shocking. But is there an inherent link to Islam? That does not seem to square with the frequent assertions of non-radical Muslim leaders, in British cities and elsewhere, that these indoctrinated extremists do not represent the mainstream of the religion. If the link is extrinsic to Islam, by definition it comes from a source outside the faith and thus does not contain or reflect essential teaching essential.

When Christians are, quite correctly, horrified and outraged by violent attacks on our co-religionists, it remains important not to condemn a whole faith. Pope Francis just said, in an in-flight interview returning from World Youth Day in Krakow, Poland, that what we are experiencing is “not a war of religions,” as many secularists like to claim.

To avoid being drawn into just such a religious war, Christians, who feel deeply the suffering of the victims, must continue to discern the meaning and implications of these events. Up to now, war has implied two opposing sides, but neither Islam nor Christianity is attacking the other. There is great danger in any potential delusion that this is a war between the faiths.

In the days following Father Hamel’s murder, news emerged that he had been a vigorous protagonist for interfaith dialogue in Normandy. It further emerged that this humble priest and his parish had made land available for the local Muslims on which to build their mosque. That is worth repeating as often as possible.

Most of us have signed up to the view that a healthy and vigorous dialogue between the church and the culture is an absolute requirement of being a Christian today. No fuga saeculi (“flight from the world”) can be our response. The murderers of Father Jacques in France were blinded by an ideology so strong that they had lost any sense of humanity.

Pope Francis concluded World Youth Day with an impassioned entreaty for a “new humanity,” urging his huge congregation to “help bring about another humanity, without looking for acknowledgement but seeking goodness for its own sake, […] to fight peaceably for honesty and justice.” If we attain the virtues by practicing them, where should we start? Francis suggests this: “to believe in a new humanity, one that rejects hatred between peoples, one that refuses to see borders as barriers and can cherish its own traditions without being self-centered or small-minded.”

David Stewart
@DavidStewartSJ
Show Comments (
4
)
Comments are automatically closed two weeks after an article's initial publication. See our comments policy for more.
J Cabaniss
5 years 11 months ago
The question here is whether what the Muslim killers believed is a valid interpretation of Islam, or, in your words, is extrinsic to it. The problem is there is no way to sustain the argument that their belief was false any more than we can sustain an argument that, say, what Jehova's Witnesses believe is false. It may be false to us, but our opinions on the matter are simply irrelevant to those who believe. As for what a "radical" Muslim believes, it would seem that there is ample support for his position in the Koran, so while his acts might seem utterly barbarous to us, it really is difficult to claim they are without foundation in his faith. I think the real problem is this: we can no more speak of what "Islam" teaches than we can accurately speak of what "Christianity" teaches. Yes, there is surely a great body of teaching that all Christians believe, but if they all believed the same thing we wouldn't have 30,000 different sects and denominations. Asserting that we are not at war with Islam is both true and not true; it is an ambiguous phrase that depends on its ambiguity to make it sound reasonable. Whether we accept it or not we are surely at war with that segment of Islam that believes it is not just their right but their obligation to extend the rule of Islam over the entire world. As to how large a portion of the entire Islamic population they comprise we can at least say this: that number will grow with time and with the success of those currently engaged in that effort.
Robert Killoren
5 years 11 months ago
Do you really mean, "it is not just their right but their obligation to extend the rule of Islam over the entire world" by terror and violence?
J Cabaniss
5 years 11 months ago
First, let's be clear about what I said, which was that Muslims had an "obligation to extend the rule of Islam over the entire world." I said nothing about how they would accomplish that, although it would be irrational to assume that terror and violence would not be involved. Second, as to whether this is an actual obligation, that - along with much else - is debatable. What seems clear, however, is that a lot of Muslims believe this, which is kind of my point. One can interpret the Koran/Haddith/sunna to support pretty much anything, at least as far as the infidels go. In any event, if the following comment is not mainstream, it is at least a commonly held belief:

It is a severe warning to the Christians who claim to be the followers of Isa (Jesus) and he will break the Cross and kill the pigs, and he will abolish the Jizya (tax); and all mankind will be required to embrace Islam with no alternative. (Drs. Muhammad Taqi-ud-Din Al-Hilali and Muhammad Muhsin Khan)

Robert Killoren
5 years 11 months ago
I am prejudiced. I rarely watch news on FOX News or MSNBC. On either one, there is very little news but mostly commentary and propaganda. Even the news they present is bent according to the ideological foundation of the networks. I do watch the opening segment of PBS News Hour because it usually contains actual news. After that there is mostly commentary. The major networks usually focus on the sensational in a superficial way. When opposing views are presented they tend to disintegrate into shouting matches and a spewing forth of "talking points" developed by the liberals and the conservatives. Where can one get actual, open dialogues where some middle ground might be discovered that could be explored or at least an open sharing of viewpoints with an agreement to disagree? Certainly not in Congress or from any of the parties. It seems everyone is shouting and no one is listening. Even here at America Media it is hard to read a comments section that is replete with real dialogue from individuals with civil tongues.