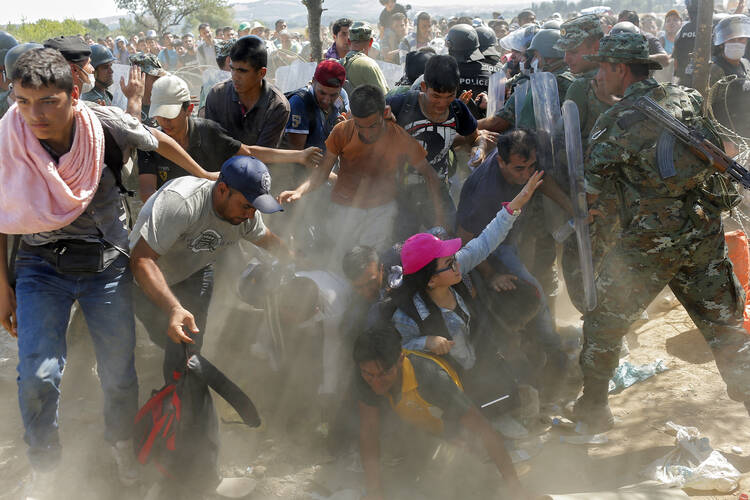 Unprecedented scenes at the borders of the European Community’s outlying states continued this week as thousands of people escaping conflict in Syria and other Middle East calamity zones pressed against hastily thrown up barricades. The aggressive response in Hungary, which currently hosts more refugees from the Syrian conflict than any other European state except Germany, was condemned by many European leaders and migrant advocates.

Images of desperate people struggling over and under razor wire and tossing their children over fencing was too much for French Foreign Minister Laurent Fabius. He called the decision to erect razor-topped fencing along Hungary’s border with Serbia "extremely harsh.”

“Hungary is part of Europe, which has values, and we do not respect those values by putting up fences that we wouldn't even use for animals,” he complained.

Thousands of Syrians and other migrants in Budapest remained camped outside its Keleti train station as Hungarian authorities insisted that only those with an EU visa could take the trains out of the city. Many refugees are seeking to reach Germany, where Chancellor Angela Merkel has promised a more generous response to the humanitarian crisis. Other European states are following different strategies but few are prepared to be as welcoming so far to asylum seekers.

"Asylum seekers are not a threat to Europe—our policies are a threat to them," officials from Caritas Internationalis, the Catholic aid and development agency, said in a statement. When EU ministers meet for talks on migration on September 14, Jesuit Refugee Services Europe officials called for safe and legal access to asylum to be at the top of their agenda.

"Borders are killing people," said Jesuit Refugee Service Europe director Jean-Marie Carrière. "Building more fences will only result in more deaths. To conquer our fear we must extend the hand of friendship to people in need. Together with policymakers we can learn from local initiatives of welcome and build good European governance on refugees.”

France’s Fabius demanded a coordinated response that would include the acceptance of refugee quotas for each E.U. member state. E.U. leaders plan an emergency summit in 11 days, but advocates say emergency measures must begin immediately to address the crisis as refugees pile up at border choke points in Macedonia, Hungary, Serbia, Italy and Greece.

The conflict in Syria has dragged on through its fourth year and shows little sign of abating. More than 4 million Syrians have been displaced and hundreds of thousands have taken refuge from the violence in neighboring states: Northern Iraq, Turkey, Lebanon and Jordan. Hundreds of thousands of others have fled to Europe.

“In the last few weeks we have seen many deaths,” Soda said. “We think that this may be explained by the fact that the smugglers are becoming increasingly violent and cruel.” Migrants are forced to stay in the holds of some larger vessels, he explained, where they cannot escape engine fumes. Many have died by asphyxiation.

“Many migrants also start the journey in a very precarious state of health, probably because bad conditions in detention in Libya,” Soda added, “Three days ago a 14-year-old Somali boy died after having being rescued. He had suffered beatings in Libya and been forced to do heavy labour without adequate food or water. He eventually died as a result of the beatings. These acts of violence constitute serious crimes. They are not isolated incidents, but part of systemic abuse of migrants, too often resulting in death," Soda notes.

The refugee crisis has been building for months, but last week over the course of 24-dreadful hours a series of grisly events shocked the global conscience: 71 decomposing bodies were discovered in a truck on the side of an Austrian highway; 200 or more were drowned after their overcrowded boat sank just off the Libyan coast; and 52 people were found suffocated, overcome by engine fumes, in the hold of another boat where they had been trapped. Images of drowned children in the surf on beaches in Libya and Turkey provoked horror throughout Europe and calls for a comprehensive response to the escalating crisis.

British Prime Minister David Cameron has so far resisted calls for greater generosity in offering asylum in the United Kingdom, arguing that the only way to respond to the refugee crisis was to resolve the conflict in Syria. Great Britain has only accepted a little over 200 Syrian refugees, while German officials are preparing to contend with something in the vicinity of 800,000 applicants for asylum.

Cardinal Vincent Nichols, the head of the Catholic church in England and Wales, was deeply unhappy with Cameron’s stance and the overall European response to the crisis so far. He told the Guardian newspaper: “This is a disgrace. That we are letting people die and seeing dead bodies on the beaches, when together, Europe is such a wealthy place. We should be able to fashion a short-term response, not just a long-term response.

“It is no longer an abstract problem of people on the scrounge,” he said. “It’s not.

“It’s people who are desperate for the sake of their families, their elderly, their youngsters, their children. And the more we see that the more the opportunity for a political response that is a bit more generous, is growing. What is screaming out is the human tragedy of this problem, to which we can be more generous.”

"What happened in Austria [where the bodies of 72 migrants were discovered in an abandoned truck] is unacceptable,” said JRS's Carrière. “This is not only a moral problem, but a political one. All European countries and societies need to work together and develop a coordinated response that protects life.”

"The only way to prevent more deaths is to implement measures that would allow refugees to travel safely and legally to Europe," said JRS Europe advocacy officer Olga Siebert.

"As the EU visa code is currently being reformed, it is absolutely essential that the humanitarian visa is included in the new legislation. A unified European humanitarian visa would destroy the business model of smugglers and allow people to use regular means to reach Europe and apply for asylum on European territory," Siebert said.

Kevin Clarke
@clarkeatamericaclarke@americamagazine.org
Show Comments (
2
)
Comments are automatically closed two weeks after an article's initial publication. See our comments policy for more.
Bill Mazzella
6 years 11 months ago
The refugee crisis has brought to front center as to who is our neighbor. All of these people are our neighbors. Our lack of response shows us where we are on the Jesus mandate.
Bill Mazzella
6 years 11 months ago
Esurientes implevit bonis Et divites dimisit inanes.