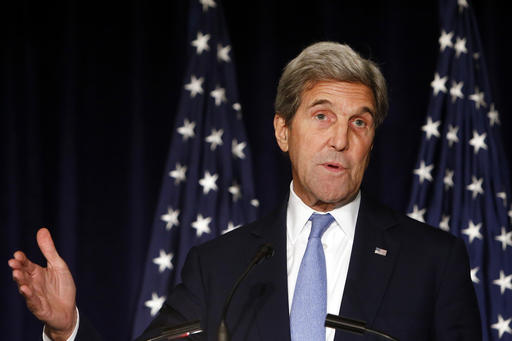 As Americans enter the final weeks of considering who will be their next president, the current administration is making the case that taking seriously religious belief must remain part of U.S. foreign policy, no matter who wins in November.

“Religious beliefs are a powerful force in our thinking and in our work,” White House chief of staff Denis McDonough said to religious and nonprofit leaders gathered at the State Department on Monday.

“Inasmuch as our job in foreign policy is to understand the world so as to advance our interests that much more ably,” he continued, “we need to understand faith and how faith drives decision making by governments and by individuals.”

Mr. McDonough’s remarks came during a two-day conference hosted by the State Department’s Office of Religion and Global Affairs, an initiative established by Secretary of State John Kerry in 2013.

RELATED: John Kerry in ‘America’: 'We ignore the global impact of religion at our peril'

The office’s 30 staff members help the State Department understand religious dynamics and engage faith leaders in countries around the world, according to Shaun Casey, the U.S. Special Representative for Religion and Global Affairs.

“It’s always been Secretary Kerry’s belief that religion is a powerful force around the world, sometimes for good, sometimes for not so good and sometimes in the middle,” Mr. Casey told America.

“We ignore that power at our peril,” he said.

Mr. Casey said the office has helped the State Department engage religious leaders and understand the nuances of religious thinking on a range of issues, including climate change, refugee resettlement and religious plurality.

One U.S. ambassador, for example, said on a panel that the office helped him understand that Catholics in Hong Kong are politically savvy—and have deep connections in China that could help the United States with its foreign policy goals. (Reporters were told they could not identify certain speakers.)

Mr. McDonough, who served as President Obama’s deputy national security advisor before taking over as chief of staff in 2013, was on hand to highlight some of the ways the Obama administration has worked with religious leaders and faith-based organizations to advance U.S. interests.

He cited Pope Francis as being especially important in two key areas.

“One of the most historic changes in our foreign policy was mediated by a religious leader,” Mr. McDonough said.

“I’m speaking, of course, of the work by Pope Francis, through letters to President Obama and Raul Castro,” which, he said, “encouraged a thaw in relations between the United States and Cuba after more than 50 years.”

The Vatican revealed in December 2014 that Pope Francis had personally engaged President Obama and President Castro through letters, urging the two leaders to get to the negotiating table. It was also revealed that in October of that year officials from Cuba and the United States met at the Vatican to discuss ways the two countries could begin the process of ending their economic and diplomatic stalemates.

Pope Francis underscored his desire for the two nations to become closer by stopping in Cuba immediately before he visited the United States last year.

On efforts to curb climate change, Mr. McDonough said, “the entire planet was blessed that Pope Francis put his profound moral authority behind these efforts with his groundbreaking encyclical on the environment.”

That encyclical, “Laudato Si’,”calls on governments to enact policies that shield the planet from environmental degradation, including air and water pollution as well as threats from climate change.

The pope’s visit to the United States last September provided an opportunity for the Obama administration “to work with diverse faith-based community groups to form new partnerships aimed at helping us to promote climate preparedness at home,” Mr. McDonough said.

While the State Department has a separate office that deals with issues of international religious freedom, Mr. McDonough remarked that carving out a space in the public square for religious minorities at home is the best way to promote religious liberty abroad.

“Standing side by side with people of all faiths, and people of no faith, to promote religious freedom for all and shining a spotlight on those who would deny it is a powerful tool in our diplomatic arsenal,” he said.

Many Catholic organizations have sparred with President Obama over religious freedom issues at home, usually in the realms of health care and L.G.B.T. rights.

But Mr. McDonough touched on one area where the Obama administration and the Catholic Church share a common goal: refugee resettlement.

In recent years, the U.S. government has relied on faith-based organizations to resettle refugees from wartorn areas, including Syria. Catholic groups comprise the largest faith-based resettlement network in the country, and Mr. McDonough urged all people of faith to keep up this work.

“You are at the forefront of our nation’s efforts to help refugees start life anew,” he said. “From helping them participate fully in civic life to empowering them with the tools they need to succeed as workers and entrepreneurs, you are leading the way in building welcoming communities in which refugees can and do prosper, as they have now for centuries in this country.”

He noted that President Obama set a goal of resettling 85,000 refugees, including 10,000 Syrians, in the United States in 2016, which was reached earlier this year.

“And no matter how loud the cries from xenophobic voices, the president will not back down from this commitment,” he continued, a veiled reference to Republican White House hopeful Donald J. Trump’s promise earlier in the campaign to ban Muslim refugees from entering the United States.

The former deputy national security adviser said the “diversity and depth of faith in this country is an enduring, unique aspect of our national strength” and warned religious leaders not to take this for granted, tying it to the battle over refugee resettlement.

“We all must redouble our efforts to protect that pluralism and diversity, including maintaining America’s leadership role in the refugee process,” he said.

In 2010, a nonpartisan commission of political and diplomatic experts said the United States must do a better job in taking seriously the role religion plays globally.

“The United States will be able to effectively engage religious communities only if it puts the structures and requirements in place that enable officers in the Foreign Service, military, and development sectors to be trained and educated about the role of religion in world affairs,” theChicago Council on Global Affairs wrote in 2010.

The following year, then-Secretary of State Hillary Clinton asked the State Department to consider how it could better reach out to civil society, including in the area of religion. Those discussions led to the creation of the Office of Religion and Global Affairs.

This week’s conference is meant to highlight some of the office’s advances in this area, Mr. Casey said. He said the goal is to make sure U.S. diplomats understand the religious complexities in any given region, or are at least aware of asking the right questions.

Since its inception in 2013, the office has engaged religious leaders on a number of issues, including advancing L.G.B.T. rights abroad, combatting anti-Semitism in Europe, fighting corruption in Africa and working with religious partners in fighting global public health emergencies, such as the 2014 Ebola outbreak.

Mr. McDonough noted that the diversity of projects highlights the office’s commitment not to favor one religion over another.

“Just to be clear, though, and I’m sure many of you have heard this before from us, in no way is the United States government proselytizing or endorsing any particular religion,” he said. “Our strategy is one of inclusion and outreach, consistent with our Constitution.”

While there have been successes, there’s still a lot of work to do, Mr. Casey said.

“There are 70,000 people working in the State Department and I have 30,” Casey told America, “so the ratio is pretty intimidating when you think about it.”

Mr. McDonough, who spoke of his own Catholic faith in his remarks, said that the office’s work should continue come January 20, when the Obama administration will come to an end.

“We hope the seeds we’ve planted will continue to flower, that the good work that has been done to understand religion and to partner with faith communities to promote the common good will continue far beyond the time President Obama leaves office,” he said.

Michael J. O’Loughlin
@MikeOLoughlin
Show Comments (
1
)
Comments are automatically closed two weeks after an article's initial publication. See our comments policy for more.
William Rydberg
4 years 5 months ago
Tell that to the Christians undergoing "white glove" discrimination in majority Muslim countries. Tell that to the Christians being bombed by the Kurdish Allies of The USA right now. In my opinion, Mr Secretary Kerry the Super-Rich Billionaire (who was once a champion for the poor) has nothing to say that convinces anybody in the know these days that he ever heard about Social Justice taught by the Church. He seems to forget that in Catholicism we tend to judge by its Fruit. He appears to be a member in good standing of the War Party. That War Party despises the weak. I only wish that the Canadian Section of the Northeast North America Jesuit Province would become vocal. They might start by objecting to the fact that CANADA is presently the 2nd largest Arms Dealer in the Middle East. Thanks to Canada's new Liberal Government! Sadly, they (Canadian Jesuits s) are still immobilized by the effects of the Quiet Revolution in Quebec in my opinion... Let's hope that their American Brothers in the larger North Eastern North America Province do not fall silent as well. So sad IMHO. Even America Magazine in my opinion abets this inaction. Another example is: When was the last time we read anything about the potential for Thermonuclear War, or even the observation that the Pope Francis compared to JPII John XXIII and Paul VI rarely talks about the need for World Peace and the potential for Thermonuclear War? It's all about other less urgent subjects. One would think that America Magazine would spill some ink on the creepy news coming out about experimentation on new infants through the manipulation of DNA-with 3 or more Parents. Or, how about asking if the Pope Francis is always right? For example, what's happening to the Underground Roman Catholic Church in China? Why is a Bishop moving between both Churches, then denouncing the Underground Church without comment by Rome. Discussion needs to happen in the pages of America Magazine. Lives are at risk. Instead we get new guys like Mr O'Loughlin calling the shots about what's important in America Magazine. To date, I still don't get his connection to the Society of Jesus? in Christ,