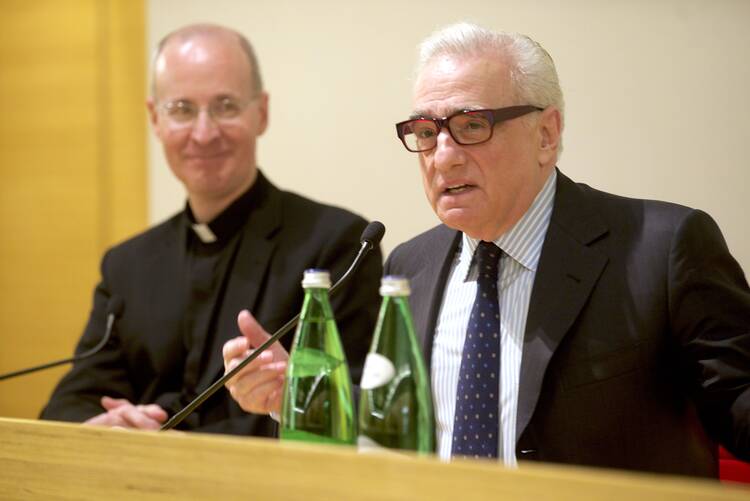 There is no shortage of events for priests in Rome, but last night, it was standing room only at the Pontifical Oriental Institute where the Oscar-winning director Martin Scorsese screened his film Silence, set to be released in the United States later this year.

A group of 300 Jesuit priests and brothers who live, work and study in Rome were invited to a screening of Mr. Scorsese’s latest work. The film tells the story of 17th-century Jesuit missionaries who travel to Japan in search of their mentor, who is rumored to have renounced the faith under torture at the hands of the Japanese regime.

Also at the screening were screenwriter Jay Cocks, editor Thelma Schoonmaker and other colleagues from his production company.

James Martin, S.J., America’s editor at large and a consultant for the film, helped to organize the screening and question-and-answer session. He reported that the Jesuits were deeply moved by the film. “You could hear a pin drop by the end.”

After the screening, Father Martin interviewed Mr. Scorsese about how his own faith has changed over the course of 30 years.

Then the floor was open for the Jesuits to ask Mr. Scorsese about the film. There were questions from Jesuits from Malta, from Chile and, particularly striking, one from the Philippines—who, reflecting on the church’s missionary work in Asia, praised the film’s sensitivity.

“It was a deeply moving experience seeing a film about my Jesuit brothers with my Jesuit brothers,” Father Martin said. He was particularly gratified knowing the work that went into authentically depicting Jesuit life. For example, the film’s lead, Andrew Garfield, went through the Spiritual Exercises of St. Ignatius.

This morning, Mr. Scorsese and his family met with Pope Francis for 15 minutes. According to Reuters, Pope Francis shared that he, too, had read Shusaku Endo’s novel, on which the film is based. Mr. Scorsese presented the pope with a 17th-century Japanese painting of a Madonna that was venerated by Japan’s underground Christians.

Later today, Mr. Scorsese and his colleagues are heading to a screening at the Vatican in Palazzo San Carlo. The Vatican has not said whether or not the pope will attend.

On Sunday, Mr. Scorsese and his family and friends were welcomed into the Jesuit community of the Gesu for lunch among some 70 young Jesuits in formation from 27 countries. He was given a tour of the rooms of St. Ignatius, the Church of the Gesu and the Church of St. Ignatius by Father Martin, Adam Hincks, S.J., Christian Sáenz S.J., and David Collins, S.J. Fathers Hincks and Sáenz give tours regularly at these Jesuit holy sites. Father Collins, a historian at Georgetown University and also a consultant on the film, was in Rome for the Jesuit’s General Congregation.

Father Martin was excited to be able to show Mr. Scorsese around these important Jesuit sites in Rome. “To be able to invite him into the Jesuit community in Rome was a wonderful way to pay him back for the gift he has given to the Society [of Jesus],” Father Martin said. “He’s created this masterpiece about our lives.”

At one point during their amblings in Rome, in an anteroom outside the sacristy of the Gesu, Father Martin noticed a painting and pointed it out to Mr. Scorsese. It was a large painting depicting the martyrdom of 52 Christians at Nagasaki—an anonymous artist giving life to the stories of Christians who suffered to bring the Gospel to world, just as the Italian-American director standing across from it had.

Zac Davis
@zacdayviszdavis@americamedia.org
Show Comments (
5
)
Comments are automatically closed two weeks after an article's initial publication. See our comments policy for more.
Vince Killoran
6 years 2 months ago
The NYT Magazine story this past weekend, and now this story, make this seem like such a compelling film.
L J
6 years 2 months ago
Herein lies the double standard that the Catholic Church hoists on a decayed culture but in this case by the Jesuits of America. We are hearing and hopefully reading a great deal about the denigration of marriage and family. We have all read the statistics and we are seeing the outcome. The disgrace marriage has suffered has translated into the chaos we now see in our nation: Donald Trump and Hillary Clinton represent two abject failures who have millions of defenders. Thus it has probably caught no ones attention that Scorsese has been married 5 times. What do we tell our millennials, our children and grandchildren when the Holy Father and Jesuits lay accolades at a man who has mocked marriage? If Scorcese can denigrate it then why shouldn't they? This is fake news, America. You can find holy people to lavish praise who volunteer for the Jesuit Volunteer Corp and serve as towering examples instead of the likes of Scorsese. Laraine Marie Brennan (m. 1965; div. 1971) Julia Cameron (m. 1976; div. 1977) Isabella Rossellini (m. 1979; div. 1982) Barbara De Fina (m. 1985; div. 1991) Helen Schermerhorn Morris (m. 1999) https://en.m.wikipedia.org/wiki/Martin_Scorsese
William Rydberg
6 years 1 month ago
Mr Reyes, It seems that contrition is NOT a condition for absolution in Rome, but rather Time is... Not a word about the Last Temptation of Christ. Seems that this article passes muster with the America Editorial Board. Sad in my opinion.. Seems that American Jesuits and the Pope really admire Hollywood. I find their attitudes sycophantic and at bottom perplexing. In my opinion... in Christ
Matthew Furjanic
6 years 1 month ago
Such mean-spirited, judgmental words from Mr. Guillermo Reyes on Mr. Scorsese. And then heaped on by Mr. William Rydberg. Yes, we all know who Martin Scorsese is and his checkered past. As my dad would say, "Nobody's perfect." Jesus said in a similar context when people were about to throw stones: "Let the one among you who is without sin be the first to throw a stone..." Jn 8: 7 Mom would just say: "If you can't say anything nice, don't say anything." As a parent, I see a teachable moment for me to talk to my children... I was about to ask the editors: "Why do you publish letters like those mentioned above?" But in writing my response, I get it... Kudos to you AMERICA.
alan macdonald
6 years 1 month ago
What a great letter Mr Reyes! LOoking at the picture of a fawning Fr Martin looking at Scorcese makes one realize how very shallow Hollywood and its "actors" and factors can be.