‘Santa Muerte,’ A Worrying Challenge to the Church in Mexico 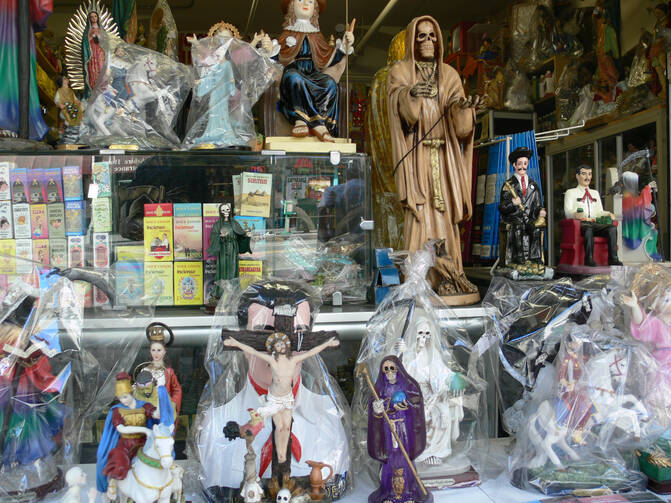 His address to Mexico’s bishops on Feb. 13 included an episcopal scolding of epic proportions, calling bishops back to their pastoral jobs of service, but Pope Francis also included a thinly veiled admonishment for Mexico’s faithful. Urging bishops "not to underestimate the moral and anti-social challenge which the drug trade represents,” the pope said he was "particularly concerned" by those who "praise illusions and embrace their macabre symbols to commercialize death in exchange for money.”

Those comments may have provoked head-scratching north of the border, but they were probably heard clearly here by the millions who have become part of what has been described as the fastest growing religious movement in Latin America, the devotion to Santa Muerte, “Saint Death.” In Mexico the devotion Santa Muerte, called “the boney one” or “the white lady,” emerged from relative obscurity in 2001, but now claims as many as 10 to 12 million new devotees. They are scattered throughout Latin America, but the vast majority of Santa Muerte’s followers are in Mexico. The “santa” is depicted as a dark-cloaked, hooded skeletal figure; her resemblance to Middle Age depictions of the grim reaper which first emerged during the Europe’s black plauge-era is not coincidental.

Andrew Chesnut is the Bishop Walter F. Sullivan Chair in Catholic Studies at the Virginia Commonwealth University and the author of Devoted to Death: Santa Muerte, the Skeleton Saint (Oxford University Press, 2012), the first in-depth study of the Mexican folk saint in English. Though some in Mexico sometimes seek to claim her as a remnant of Aztec spiritualty, Chesnut believes the origin's of the saint of death are thoroughly European, previously unholy images of the Grim Reaper supercharged by traditional Catholic practices of devotional prayers and votive candles. Chesnut thinks it is clear the upheaval, uncertainty and suffering thrown during Mexico's militarized war on drugs during the Calderón administration (2006–12), which led to widespread disorder and the deaths of as many as 100,000 people, clearly helped accelertate the devotion to Santa Muerte.

Chesnut is in Mexico City, tracking the impact of the pope’s visit. He’s pretty sure the pope will not make a direct condemnation of Santa Muerte during his week in Mexico, calling her out by name might actually elevate the devotion, but other local bishops regularly denounce her and acts of devotion to her—typically prayers accompanied by the lighting of votive candles—as blasphemous, satanical, “an absurdity.” In 2013, Cardinal Gianfranco Ravasi, the President of the Pontifical Council for Culture, condemned worshipping of the skeletal “santa” as "sinister and infernal.”

Santa Muerte has become the cross-demographic devotion of choice for Mexicans who have found lighting various candles to an array of Catholic saints for the specific different problems which assail them too taxing.

“As esoteric as [devotion to Santa Muerte] seems, it is very practically oriented,” Chesnut says. The white lady is a one-stop devotional shop, according to Chesnut, for narco-traffickers seeking harm on enemies or protection for themselves, businesses seeking a prosperous opening, mothers worried about a child’s health or a daughter’s job prospects, even for young women, worrying about a roving husband or boyfriend. It is from that latter problem that the devotion first arose, says Chesnut. For decades, he explains, Santa Muerte was considered the “love doctor” for women seeking to remove another woman from their lives and return a penitent boyfriend or husband, but in the 1980s members of drug cartels and criminal gangs turned to Santa Muerte for sustenance in their black trade.

From that niche devotional market she jumped into the mainstream and now the church is struggling for a strategy to push her back out. One response has been to revive the devotion to the Mexico’s long-time favorite, St. Jude, according to Chesnut.

Santa Muerte, he says, appeals to the same marginalized contingent in Mexico, especially among its youth. The problem has been that when some feel St. Jude isn’t listening why not give the boney lady a try? She has developed a stern reputation for effectiveness—stern, because according to Chesnut many here believe that people who do not respond adequately in devotion to Santa Muerte after she has responded to their prayer request are in for big, even fatal retribution.

“Many people here have a devotion to her and still consider themselves good Catholics,” says Chesnut, “and that is a real challenge for the church.”

More worrying many young people, he adds, have been willing to be “upfront” and acknowledge that they don’t believe themselves Catholic anymore, but simply devotees of the white lady, Santa Muerte.