A Real Pardon for Thanksgiving

A Real Pardon for Thanksgiving 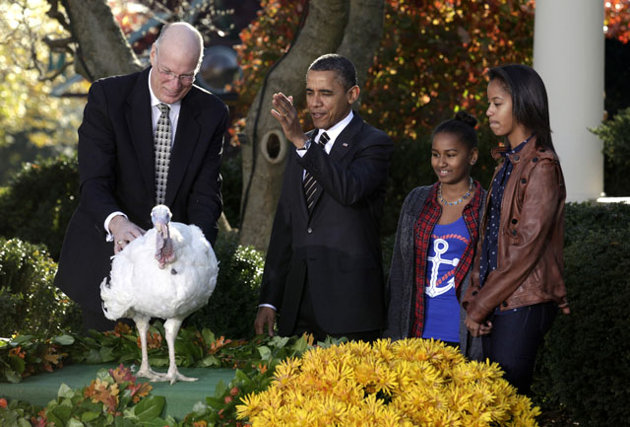 Later this week the President of the United States, the most important person on the planet, will pardon a turkey.

Now, if this were "Scandal," this tradition might actually make sense, insofar as it would give Fitz yet another reason to demand Liv come and visit. (The scene: President Fitz, whiny man-child that either Martin Sheen or Geena Davis could drop with a one-handed slap, has to choose which turkey to pardon. Furious at Liv for some perceived slight (a.k.a. moment of sanity--Stand in the sun, girlfriend!), he decides instead to murder all the turkeys everywhere with his bare, Scotch-soaked hands.)

But in the real world, the turkey pardon is a ridiculous custom. Yes,  "Caramel," "Popcorn" or "Cider" might make it out of this year's turkey shoot alive. (Though speaking on behalf of the turkeys, can I just say they'd prefer not to be named after other food? Or at least not delicious food? More "Liverwurst," less "Pumpkin Spice Mocha", please?) But one day or another they're all going to end up as white meat and dark on somebody's plate.  Most of those pardoned don't even survive a year (because they are too fat, a fact that I like most Americans will ignore for as long as my arteries hold out).

Also, the pardoning of the turkey is hardly a tradition embedded in the fabric of our country. Last year Will Storey did a piece for The New York Times on the history of the pardon, and couldn't even ascertain when it definitively became a thing that presidents do. President Lincoln did save a turkey one year, for Tad. President Truman was thought to have been the first president to officially pardon a turkey, but the Truman Library has no record of him ever doing so. Only in 1989 did the term "pardon" actually come into use, by President George H.W. Bush.

But here's the real issue: in a country that has so many of its citizens locked up—in 2014, the United States has more people per 100,000 in jail than anywhere in the world other than Seychelles (note to self: do not visit Seychelles)—the idea that we make such a to-do about pardoning a bird is an embarrassing illustration of just how mixed up our priorities are.

If we really want a presidential pardon for Thanksgiving, let's make it meaningful.  Let's pardon some people.

And we wouldn't even have to look to those currently in prison. In 2012, over 5.85 million people were unable to vote in the presidential election because they had previously committed a felony. To be clear, these were people who had served out their sentences and returned to society.

Also, they were for the most part not the crime-of-the-century criminals Nancy Grace would tell us to assume. No, these were people who stole cars, who vandalized property, who had been caught with drugs in their possession. Even public intoxication or loitering can be a felony charge, leading to the same loss of rights for years after a sentence is finished—or in the case of Virginia, for the rest of your life. (Virginia, even Florida lets them vote eventually. Your most famous citizen wrote the Declaration of Independence, for God's sake. Get it together.)

If Thanksgiving means anything today (other than fuel for the mayhem of Black Friday), it is a celebration of generosity. It's about sharing what we have, in particular with those who have less. As much as we pat ourselves on the back in the United States for the character of our democracy, when it comes to those who have screwed up but then made amends, time and time again we forget.

It need not be that way. President Obama, in six years in office you have pardoned or commuted the sentence of 53 people. That's 136 fewer than your predecessor, and 400 fewer than President Clinton. You are a man who prides himself on calling us to our best selves and the bigger picture. If you really want to teach our children what it means to be an American, values like justice, mercy and generosity, by all means, pardon this year's "Candy Cane," "Mudslide" and "Strawberry Milkshake."

But also, please, pardon some of our citizens.