The Punisher is now president-elect. Can the church in the Philippines adapt? 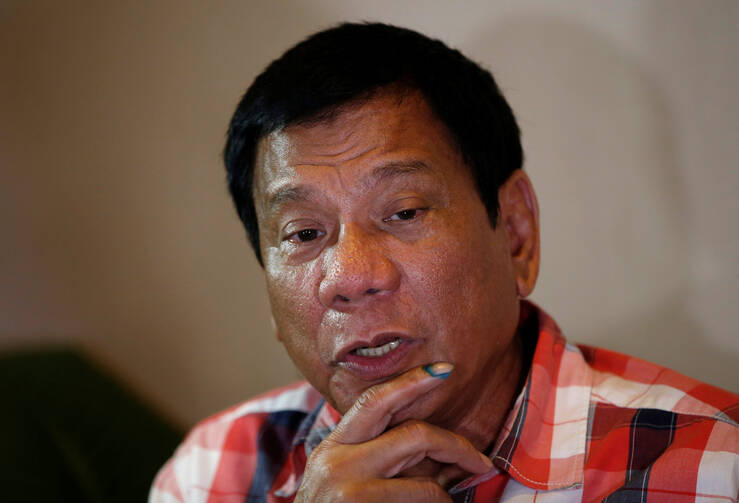 Cursing Pope Francis is an unorthodox campaign tactic. This might seem especially obvious if your electorate is over 80 percent Catholic. But Rodrigo “Rody” Duterte, no orthodox candidate, did just that en route to a convincing win in the Philippine presidential election on May 9. Duterte eventually apologized for his comments, but concerns over his election rest on deeper differences than on an admittedly foul mouth. Duterte’s resounding win is troubling to many concerned over his strongman approach to combating criminality. This includes leading voices among the Philippines’ Catholic bishops. His election, in spite of the clergy’s opposition, raises questions about the future role of the Catholic Church in Philippine public life.

To American readers, mention of the Catholic Church in Philippine politics likely conjures righteous images of 1986’s “People Power” Revolution. Stirring scenes of women and men religious standing before security forces of the Marcos dictatorship are rightly remembered as a high water mark in what political scientists now consider the “third wave” of democratization in the Philippines. The partnership between Manila’s Cardinal Jaime Sin and opposition leader Cory Aquino was central in restoring democracy after dark years of martial law. Elite and grassroots Catholics worked closely with members of other faith communities, as well as more secular portions of civil society, in these efforts.

While this moment is worth memorializing, it can obscure the more complex place of religion in the post-People Power Philippines. Today, while Manila’s Cardinal Tagle remains a central figure in the Philippines (and Francis’ Vatican), clerical elites must contend with a diversified religious landscape. Major Protestant associations like the National Council of Churches of the Philippines and the Philippine Council of Evangelical Churches are active public voices, while leaders of the Iglesia ni Cristo regularly endorse political candidates. Muslim leaders speak out on issues far beyond the Bangsamoro peace process in Mindanao. Even within the Catholic majority, charismatic movements like El Shaddai and Couples for Christ claim millions of members and play their own part in public life.

Thus, while clerical and lay Catholics are prominent throughout Philippine public life, the consolidation of democracy has forced the church to jockey with various religious and secular actors. Church advocacy has a mixed record in the past quarter century, in areas as diverse as fighting corruption, advancing agrarian reform to alleviate rural poverty, and advocating environmental protection and disaster relief. Progress has, at times, been real. But the images are less riveting than those from the EDSA protests of 1986.

Nowhere was this clearer than the sharp controversy over reproductive health legislation in 2012-13. With Cory Aquino’s son, outgoing-President Benigno “Noynoy” Aquino, in office, leaders from the Catholic Bishops Conference of the Philippines found themselves in disagreement with the government about the “RH Law,” which expanded government provision of contraceptives, among other public health policies. The CBCP and prominent lay Catholic associations had long opposed such legislation, but Aquino pushed it through over their objections in the closing days of 2012. Mediation efforts softened some edges of the legislation, especially related to religious liberty, but this was a consolation prize. If the inheritor of the Aquino mantel would push such an issue, some doubted what was left of Catholic influence in public life.

The Duterte campaign arose against this religious backdrop. Duterte has long been a polarizing figure in Philippine politics. While a newcomer on the national stage, he is a long-time mayor of Davao City, the largest city on the island of Mindanao. Much skepticism of Duterte stems from his way with words, which extends beyond his profane reference to Pope Francis. He has cracked wise about the 1989 rape and murder of an Australian missionary in Davao, threatened to fatten the fish of Manila Bay with the corpses of criminals, and boasted about his Viagra-fueled personal life. Duterte rejects comparisons to Donald Trump, but there is at least a rhetorical resemblance.

However, unease with Duterte’s agenda is about more than rhetoric. These fears are particularly rooted in Duterte’s ambiguous relationship with groups known as the “Davao Death Squads” during his two decades as the city’s mayor. As Fr. Amado Picardal, leader of the CBCP’s Committee on Basic Ecclesial Communities, has documented in conjunction with human rights organizations, from 1998-2015 the DDS were responsible for extrajudicial execution of 1,424 individuals, most of whom were young, poor and involved at low-levels of the drug trade. In the words of the United Nations Special Rapporteur on Extrajudicial, Summary or Arbitrary Executions, “the Mayor of Davao City has done nothing to prevent these killings, and his public comments suggest that he is, in fact, supportive.” Duterte has boasted that, as president, those 1,000 killings could become 100,000.

As the Duterte campaign gained obvious momentum in opinion polls, rhetoric from Catholic elites hardened. The Bishops-Businessmen’s Conference for Human Development, a prominent network of Catholic clerics and laity, wrote, “[We cannot] vote for anyone who has done nothing to apprehend the perpetrators of more than 1,400 extra-judicial killings under his city administration.” Archbishop Antonio Ledesma of Cagayan de Oro wrote that “summary killings…are illegal, immoral and sinful,” while Cardinal Orlando Quevedo of Cotabato urged voters to support only candidates who protected the right to life, “even of suspected or convicted criminals.”

This growing opposition culminated in a statement a week before the election  from Archbishop Socrates Villegas, president of the CBCP. Writing on behalf of the body of bishops, Archbishop Villegas sympathized with the popular “desire for change” espoused by in the electorate. But, he continued, “this cannot take the form of supporting a candidate whose speech and actions, whose plans and projects show scant regard for the rights of all, who has openly declared indifference if not dislike and disregard for the Church especially in her moral teachings.” The CBCP’s message was clear even without listing candidates by name.

And yet, in spite of church opposition, Duterte romped to victory in the poll. In part, this is because of a fragmented field of candidates and the plurality-based Philippine electoral system. Duterte faced four alternative candidates, and won with only 38 percent of the popular vote. Still, the win was decisive. With the vote counting nearly complete, what does this result mean for the future of religion, and Catholicism in particular, in Philippine public life?

The initial response from Archbishop Villegas and the CBCP has been to offer prayers and promise “vigilant collaboration” with the incoming administration. This seems to allude to Cardinal Sin’s posture of “critical collaboration” in the early years of the Marcos regime.  The bishops pledge “to teach and to prophesy, to admonish and to correct,” in pursuit of the common good. The message closes with a call to action from Matthew’s account of the Passion: “Get up now let us go…”

But on what path could Catholic leaders go in Philippine public life in light of these results? While President Duterte has already voiced an interest in an official visit to the Vatican to build bridges with the pope, it seems fair to presume that relations between the CBCP and the new executive will remain strained.

It would be a loss to both the church’s mission and Philippine society, however, if Catholic leaders decided to withdraw from public life after the twin disappointments of this election and the RH Law controversy. Indeed, “vigilant collaboration” presents several opportunities to renew Catholicism’s place as a moral voice of the Philippine people.

First, such collaboration is likely to center on preserving the institutions of democracy in the Philippines that the People Power revolution restored three decades ago. This will involve continued election monitoring through groups like the Parish Pastoral Council for Council for Responsible Voting, as well as work combatting corruption with allies through the Coalition Against Corruption. Duterte has promised broad constitutional change, which could empower provinces through forms of federalism, but could also further weaken checks on presidential authority. Catholic elites have played an active role in constitutional debates since the 1987 Constitutional Commission, and are likely to be called again to this role.

Second, vigilant collaboration presents opportunities for a renewed dedication to the protection of the sanctity of life at all stages in the Philippines. As Eleanor Dionisio, a sociologist with the John J. Carroll Institute on Church and Social Issues, wrote recently in the Philippine Inquirer, the greatest Catholic concern is not Duterte’s words, but his “troubling lack of respect for human life.” Will vigilante justice be tolerated (or encouraged) at a national level? Will the death penalty, suspended since 2006, be reinstated? Will the lives and dignity of the poor be protected, especially in the face of mounting threats from environmental degradation and uneven economic growth? The crisis of the RH Law divided some in the pro-life community from former allies in civil society. Renewed collaboration could help restore these ties, which historically have been central to advancing human dignity in the Philippines.

Finally, collaboration is likely to involve furthering peace and integral development on the island of Mindanao. This is an area where a Duterte administration could provide unique opportunities. Davao City, where Duterte built his career, is not a Muslim-majority area of Mindanao, but Duterte has strong relationships with many Moro leaders and performed well on election day in Muslim-majority parts of the island. While the Aquino administration secured a landmark Comprehensive Agreement on the Bangsamoro in 2014, the Bangsamoro Basic Law needed to implement the agreement has stalled in Congress. Catholic voices, both in Mindanao and Manila, have a role in promoting a peace process that not only ends violence, but, in the words of Cardinal Quevedo, “addresses the root causes” of Moro grievances.

While “vigilant collaboration” is an appropriate initial response to this watershed election, Catholic elites in the Philippines should also use the election as an opportunity to reflect on the limits of their own influence. Why is it that so many found the Duterte campaign so attractive? Exit poll data from Social Weather Stations, a leading survey firm, indicate a sweeping victory across class lines. The troubling fact is that Duterte’s brand of populism, blending fear over crime, anger over corruption and frustration over the inability of economic growth to reduce endemic levels of poverty, resonated widely.

How to respond to this brand of populism is a question that faces Catholic elites everywhere, not only in the Philippines, but also the United States. It is reasonable to be skeptical of Duterte’s rhetoric and strongman approach to governance. But there is also little doubt that he is seen as a leader who understands the plight of the average Filipino, one who, to borrow from another man popular with Filipinos, knows the smell of his sheep.

David T. Buckley is Paul Weber Chair of Politics, Science and Religion at the University of Louisville, and author of Faithful to Secularism: The Religious Politics of Democracy in Ireland, Senegal and the Philippines (Forthcoming, Columbia University Press).