The Prayers That Jesus Knew: Abbot Gregory Reimagines the Psalms

The Prayers That Jesus Knew: Abbot Gregory Reimagines the Psalms 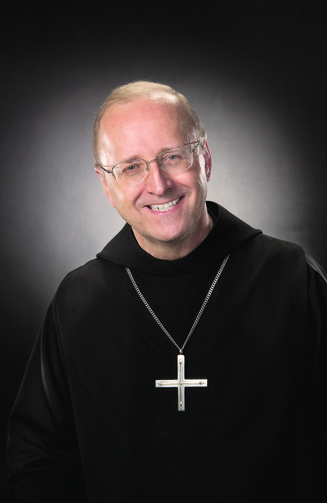 Tucked within the rolling hills of northwest Missouri is the campus of Conception Abbey, a Benedictine monastery that has been part of this landscape since 1873. Abbot Gregory Polan, Conception’s leader, is a tall, thin man with a soft voice and gentle manner. He is a talented musician who at age 16 was already serving as assistant organist at Chicago’s Holy Name Cathedral. He is also a Scripture scholar who teaches Greek and Hebrew at Conception Seminary College.

That made him the perfect choice a few years ago when the U.S. bishops decided they wanted a revised translation of the Psalms then in use, one that evoked both the musicality of the prayers and adhered more closely to the words in Hebrew.

The Psalms are, of course, revered sources of prayer for both Christians and Jews. They are among the oldest prayers ever written, “the heartbeat of the Bible,” as Abbot Gregory calls them.

“Jesus himself prayed the Psalms,” Abbot Gregory told me. “They were the prayers, if I can say, that he learned on his mother’s knee. When the gospel authors quote Jesus, often he speaks of himself in relation to the Psalms … Spirit speaks to spirit in these prayers.”

I first became aware of the power of the Psalms several years ago when I risked making a major transition in my career, from fulltime work in journalism to the study of poetry in graduate school. The lamenting Psalms shored me on days when I felt anxious or discouraged about my decision. The Psalms of thanksgiving reminded me that I was following a dream, and that many opportunities would lie ahead. The praising Psalms convinced me that God would not abandon me on my new path.

When I began to make regular visits to Mount St. Scholastica Monastery in Atchison, Kansas (visits that became the subject of my fourth book,  Atchison Blue: A Search for Silence, A Spiritual Home and A Living Faith), I daily heard the Psalms set to chant. Hearing the sisters sing these prayers so elegantly, as if in one voice, left a permanent imprint on my heart. So it was especially meaningful for me to talk with Abbot Gregory about how one even thinks about re-envisioning such iconic prayers.

Luckily, the abbot had an already excellent English translation to work from, known as the “Grail Psalms.” In 1963, the Grail Psalms became the translation used in the Liturgy of the Hours, or Divine Office, prayed by monastic communities, clergy and now an increasing number of lay people.

The original Grail Psalms are actually a translation of a translation. They derive from a 1950s French translation of the Psalms found in Le Bible de Jerusalem. The French to English version was done, interestingly enough, under the auspices of a secular women’s institute in England known as the “Ladies of the Grail” (hence the title “Grail Psalms.”)  This vernacular translation infused the Psalms with a sprung rhythm that was particularly suitable for singing and chanting in English. It became the church’s official Psalter.

“The original Grail translation has become as familiar to American Catholics who pray the Psalms as the translation in the King James Bible is to Protestants,” Abbot Gregory says.

So why seek a new translation?

“I don’t want in any way to put down the Grail Psalms. They were a wonderful introduction to helping people read the Psalms,” the abbot says. But, “In many ways, these Psalms were a paraphrase from the [Hebrew and Greek] text, instead of an authentic translation.”

Since the Grail translation was completed 60 years ago, there has been “an explosion of new understanding” about ancient Hebrew, especially the poetry in the Psalms, the abbot says. He set out to accommodate the natural poetic rhythms found in the Hebrew version of the prayers, but also change what he says “needed improvement.” It was a tall task that took him more than fouryears to complete.

“It’s not easy to replicate the Hebrew sounds. But one of the things very common in Hebrew is the play on words, and sometimes you can bring that out in text,” he says. He cites as an example the lines in Psalm 35:  Contend, O God, with my contenders … Fight those, O God, who fight me.

Speaking of fighting, I asked Abbot Gregory about the violent, vengeful language found in many Psalms that can prove off-putting to some people turning to these prayers for the first time. He calls that kind of language “essential” to the power of the Psalter.

“Let’s make sure we don’t make our prayer too antiseptic,” he says. “The violent language we pray in the Psalms becomes an important bridge helping us to realize we don’t pray the Psalms for ourselves alone, but for all the people who find their world torn apart, and who can hardly find the words to bring before God to wrap around their pain. We become their voice.”

He adds, “If we look at the variety of ways even Jesus prayed, he says on the cross, O, God my God, why have you forsaken me, quoting Psalm 22.”  Later, early church leaders often used the Psalms in preaching about Christ. “The Psalms have that very close proximity to the human experiences of longing, need, thanksgiving and praise of God,” Abbot Gregory says.

As with all monasteries, the monks at Conception chant through the entire Psalter of 150 poems every two weeks as part of their communal prayer. Abbot Gregory says he never tires of hearing each Psalm. “They are really the nourishment of monks,” he says. “Despite the fact of their daily use and their often use, they never wear thin.”

A native of the Chicago suburb of Riverside, Abbot Gregory became an accidental Scripture scholar. When he joined his monastic community, he planned to study music. He spent summers at the American Conservatory in Chicago and started working on a masters’ degree in music theory at Northwest Missouri State. But his abbot at the time needed someone to replace the monk who had been teaching Scripture.

“He noticed I had done well in biblical languages in college, and so I was sent to do graduate work in Scripture studies. I’ve loved studying the Scriptures and teaching Scripture ever since,” he says.

Before tackling the Psalms, Abbot Gregory had worked with other scholars on revising a section of the Book of Isaiah in the latest edition of theAmerican Bible. His re-translation of the Psalms was approved by the bishops’ conference in 2010. In addition to the Liturgy of the Hours, it is used in the monthly prayer guide “Give Us This Day,” put out by the Benedictines’ Liturgical Press, which offers abbreviated daily versions of the Liturgy of the Hours.

The revised Grail Psalms are also available in book form, with and without chant tones. They are intended to eventually replace the translation of the Psalms currently in the lectionary used at daily and Sunday Masses.

As someone who’s published two collections of poems, I’m struck by the lyricism of Abbot Gregory's re-translation. The words move me not only as prayer now, but as poetry as well. I sometimes even hear in my head the soft voice of Abbot Gregory as I read the words on the page—words that come from the heart of a man who is obviously deeply in love with these prayers.

A reader asked where he can obtain the re-translation of the Grail Psalms. They are in book form, sold with and without the chant tones written into them. The book is simply called "The Grail Psalms" and I believe Liturgical Press put out the book. Judith Valente

Jack Rakosky
5 years 1 month ago
The Revised Grail Psalms are available through GIA, and can be viewed here. https://www.giamusic.com/sacred_music/RGP/psalmDisplay.cfm Also check out their Licensing provisions including for Parishes and other Ecclesial Communities the conditions for Free Use for Which Written Permission Is Not Required
Michael Mello
5 years 1 month ago
I greatly appreciate Abbot Gregory's revision of the Grail Psalms. I also like very much the earlier revision of the Grail Psalms done by GIA Publications to render the language completely "horizontally" inclusive and much more "vertically" non-sexed. For me, the best translation for the liturgy would be a combination of both - the best of both worlds.
Tom Poelker
5 years 1 month ago
I believe this "In 1963, the Grail Psalms became the translation used in the Liturgy of the Hours, or Divine Office" is an incorrect statement. It is my recollection that no translation was "THE translation" used in the liturgy of the hours at that time. Several translations were permitted, leaving it to the publishers to select translations and sell their breviaries as they thought best. The "official" translation, like all other official English translations, was to be produced by the International Commission on English in the Liturgy [ICEL] representing English language episcopal conferences around the world. That translation was produced in 1994 after a worldwide collaboration of scholars in Hebrew, English, and Music. It was designed to be metrical, inclusive, and accurate. It is amazing that someone can dare to write about the development of an English Psalter without mentioning the now unfortunately suppressed ICEL Psalter.
DENNIS CALLIES
5 years 1 month ago
"...Abbot Gregory had worked with other scholars on revising a section of the Book of Isaiah in the latest edition of theAmerican Bible. His re-translation of the Psalms was approved by the bishops’ conference in 2010." I presume that Kevin Clarke is referring to the New American Bible Revised Edition. I stop short at his assertion that Gregory Polan's translation was approved by the US bishops in 2010. The collaborators are listed at the back of the NABRE; Abbot Gegory is not listed among those on the Book of Psalms. Personally I tried praying The Revised Grail Psalms and found them befuddling at times. I resorted to Robert Alter's The Book of Psalms and the NABRE translation for clarification.
Charles McNamee
5 years 1 month ago
Fifty years ago I read a book by Thomas Worden entitled "The Psalms Are Christian Prayer". It helped me immensely as I began a five year stay in a Trappist monastery. I wasn't very literate in Latin and as all the psalms of the Divine Office were chanted in Latin, I brought my pocket Jerome Bible translation of the Psalms with me at all times. Both enabled me to understand the spirituality of the psalms and how to recognize the vicissitudes of life as I encountered them every day. The transition from lamentation to remembering to confidence to praise and gratitude became my prayer and for forty years as a high school teacher and the same understanding was given to all who came for help. I believe it helped.
Advertisement