Pope, at Shrine at Madhu, Prays for Reconciliation and Rebuilding of the Unity that Was Lost 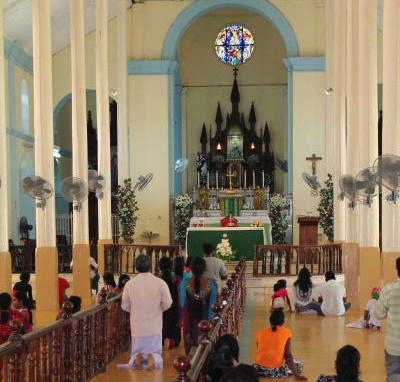 In an act of powerful symbolism, Pope Francis visited the revered Shrine of Our Lady at Madhu in northern Sri Lanka where he recalled “the terrible violence and bloodshed” that “tore open the heart of Sri Lanka,” and prayed that, through Our Lady’s intercession, Jesus would “heal the open wounds” and “restore peace to broken hearts” and enable all the islanders to rebuild the unity that was lost in the thirty years’ war.

An estimate 300,000 thousand people turned out to greet the Pope when he arrived by helicopter from Colombo. They lined the route as he drove in an open popemobile from the helicopter to the shrine, blessing and kissing children on the way. A great crowd had gathered outside the small church that is home to the 450 year old statue of Our Lady and child.

Madhu has been a site of pilgrimage ever since the 17th century. It was in the northwestern territory controlled by the separatist Tamil Tigers during their war with the Government forces. It became a haven for refugees but was hit by artillery fire in 1999, which killed 38 people that had sought refuge there, including 13 children. The statue was not harmed then, but as the fighting intensified in 2008 a Sri Lankan priest linked to the shrine fearing for its safety, removed the statue. It returned after the war ended in May 2009, leaving over 100,000 dead, hundreds of thousands homeless and widespread distrust and hatred.

On entering the shrine, Pope Francis led a prayer service, interspersed with music and hymns sung by young women, dressed in blue saris. Then, in a brief homily, he said “every pilgrim can feel at home” at the shrine because “here Mary brings us into the presence of her Son Jesus.” All Sri Lankans, Tamil and Sinhalese alike, come here “as members of one family” and entrust their hopes to the Mother of Jesus, he said, because “In her home, they feel safe. They know that God is very near; they feel his love; they know his tender mercy.”

Then referring directly to the 30 years’ war, he noted that there were families present today that “suffered greatly in the long conflict which tore open the heart of Sri Lanka,” and in which “many people, from north and south alike, were killed in the terrible violence and bloodshed.” He told them, and his wider audience following on television, that “No Sri Lankan can forget the tragic events associated with this very place, or the sad day” when the venerable statue “was taken away from her shrine.”

Pope Francis, who had fixed his eyes on the statute several times during the service, told them he wanted to thank Our Lady because “In the wake of so much hatred, violence and destruction, she continues to bring us Jesus, who alone has the power to heal open wounds and to restore peace to broken hearts.”

He asked Our Lady at Madhu “to implore for us the grace of God’s mercy” and “for the grace to make reparation for our sins and for all the evil which this land has known.” This is no easy task he admitted, but it is only “in the light of the Cross” that we can come to understand “the evil we are capable of, and have even been a part of” and “experience true remorse and true repentance.” It is only when this happens, he said, that “we can receive the grace to approach one another in true contrition, offering and seeking true forgiveness.”

The previous day, in his speech during the welcome ceremony at the airport, he has said something similar when he told his nationwide audience that “the process of healing also needs to include the pursuit of truth, not for the sake of opening old wounds, but rather as a necessary means of promoting justice, healing and unity.” Some thought he was suggesting the need for a truth and reconciliation commission, but he did not actually make that explicit.

At Madhu, where people of the different ethnic and religious communities come to pray, he reminded Sri Lankans that Our Lady is always there to help them “in this difficult effort to forgive and find peace.” And, just as she forgave her Son’s killers at the foot of his Cross, so today “she wants to guide Sri Lankans to greater reconciliation” and “healing.”

He prayed that the Mother of Jesus would accompany “the efforts of Sri Lankans from both Tamil and Sinhalese speaking communities to rebuild the unity which was lost” and assist them “come home to God in a renewed spirit of reconciliation and fellowship” and to obtain for them the strength “to build a future of reconciliation, justice and peace for all the children of this beloved land.”

At the end of the prayer service he blessed the people with the revered statue of mother and child, and afterwards placed his own rosary around the neck of Our Lady. He looked visibly moved when at the end of the service the local bishop gave him a wooden replica of that same statue. He will take it back to the Vatican as a visible reminder of the sufferings of Sri Lankans from the war, just as he took back from Korea a crown of thorns made from the wire on the fence that divides that peninsula. He will remember them in his prayers.

After returning to Colombo from Madhu, the Pope visited a Buddhist Temple in the Sri Lankan capital - the Mahabodhi Biharaya.  The head of the temple is the leader of an international Buddhist organization, and was at the airport to welcome the Pope, and issued the invitation then. The Vatican spokesman, Fr Federico Lombardi revealed all this in a late evening briefing with journalists on January 14. Lombardi said the Pope took of his shoes before entering the temple, and inside the monks showed him the relics of two holy men kept in a stoupa, who were close to the Buddha, and sang a prayer. Normally the stoupa is only opened once a year, but they made an exception for the Pope. This was a sign of his intent to foster as far as possible the dialogue with other religions, according to Lombard. John Paul II also entered a temple in Thailand in 1994.

Pope Francis also met the former President of Sri Lanka, Mahinda Rajapaska, who had invited him to visit this country. The ex-president was accompanied by his brother and their respective spouses at the meeting which lasted 20 minutes. And "still full of energy," Fr Lombardi said the Pope also visited the archbishop of Colombo's residence to meet the Sri Lankan bishops, and make up for the meeting he had to cancel at the last minute on his first day here.

Tomorrow morning, January 15, the Pope will bless a cultural institute dedicated to Benedict XVI, as he drives to the airport to take a six hours hour flight to Manila. But his visit to the shrine at Madhu was in fact the last time that he spoke publicly during his stay here and again he called for reconciliation and healing in this nation wounded by war, just as he had done in every public utterance since his arrival on this beautiful island. It was the leitmotiv of his extraordinarily successful visit here.