Pope in Nairobi: It would be 'catastrophic' if the Paris summit on climate changes fails 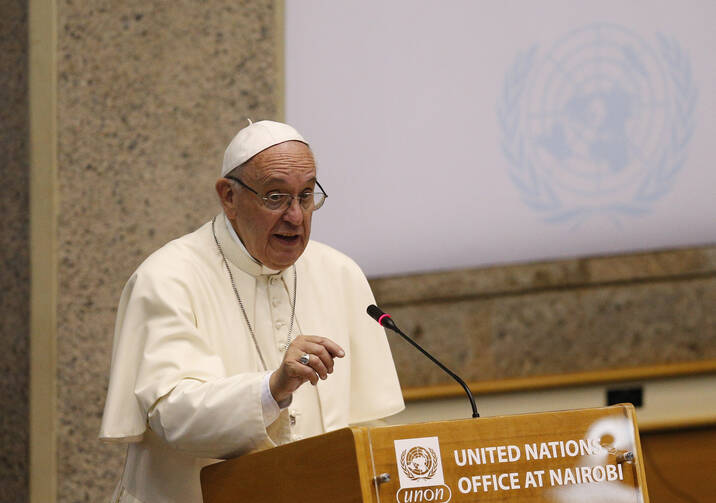 Speaking on the eve of the UN summit on Climate Change (COP21), which opens in Paris on November 30, Pope Francis said he hopes this important international gathering “will achieve a global and ‘transformational’ agreement on lessening the impact of climate change, fighting poverty and ensuring respect for human dignity.”

He sees such an agreement as one of the utmost importance for humanity’s future, as he made abundantly clear in his encyclical “Laudato Si’: On the care of our common home” which he published in June of this year.

He posed the challenge before COP21 in stark terms when, in Nairobi, he addressed audience of 3,000 persons at the UN headquarters in Africa (UNON), among them delegates to this office, accredited diplomats and staff members on Nov. 26. He put it this way: “We are confronted with a choice which cannot be ignored: either to improve or destroy the environment.”

“It would be sad, and I dare say even catastrophic, were particular interests to prevail over the common good and lead to manipulating information in order to protect their own plans and projects,” Francis stated frankly.

Francis made this last remark because he’s well aware that powerful economic interests—particularly, though not only, in the coal industry—are opposed to this and are actively involved in disinformation.

He explained that COP21 “represents an important stage in the process of developing a new energy system which  depends on a minimal use of fossil fuels, aims at energy efficiency and makes use of energy sources with  little or no carbon content.”

He made abundantly clear that the governments of the world meeting in Paris “are faced with a great political and economic obligation to rethink and  correct the dysfunctions and distortions of the current model of development.”

An agreement at the Paris summit, he said, “can give a clear signal in this direction, provided that, as I stated before the  UN General Assembly, we avoid every temptation to fall into a declarationist nominalism which would  assuage our consciences.”

Francis called for an “agreement” at COP21 “based on  the principles of solidarity, justice, equality and participation; an agreement which targets three complex  and interdependent goals: lessening the impact of climate change, fighting poverty and ensuring respect  for human dignity.”

He spoke in Spanish, as he had done at the UN in New York, and was given a standing ovation at the end, as also happened at the UN General Assembly in September.

His speech was long, and in it he highlighted the importance of the development of “a new culture” to deal with these important issues. He also spoke about the forthcoming Ministerial Conference of the World Trade Organization in Nairobi, in a few days, and said, “We have yet to attain an international system of commerce which is equitable and completely at the service of the battle against poverty and exclusion.” He hoped this conference “will not be a simple balancing of conflicting interests, but a genuine service to the care of our common home and the integral development of persons, especially those in greatest need.”

Looking ahead, he also highlighted the Habitat-III conference that is planned to take place in Quito in October 2016 as a place where the problems linked to the rapid process of urbanization can be addressed.

Apart from his important remarks on COP21, Pope Francis’ remarks on the destruction and exploitation of the natural resources of Africa, and also on the need to address curable diseases were particularly significant.

“Interdependence and the integration of economies should not bear the least detriment to existing systems  of health care and social security; instead, they should promote their creation and good functioning,” he said.

He called for political attention to “certain health issues, like the elimination of malaria and tuberculosis, treatment of so-called orphan  diseases, and neglected sectors of tropical medicine.”

Speaking of the “beauty and natural richness” of Africa, Pope Francis said this  patrimony “is constantly exposed to the risk of destruction caused by human  selfishness of every type and by the abuse of situations of poverty and exclusion.”

Commenting on “the context of  economic relationships between states and between peoples,” Francis said, “we cannot be silent about forms of illegal  trafficking which arise in situations of poverty and in turn lead to greater poverty and exclusion.”

He mentioned in particular the “illegal  trade in diamonds and precious stones, rare metals or those of great strategic value, wood, biological  material and animal products, such as ivory trafficking and the relative killing of elephants, fuels political  instability, organized crime and terrorism.”

The pope’s conclusion was particularly striking: “This situation too is a cry rising up from humanity and the  earth itself, one which needs to be heard by the international community.”