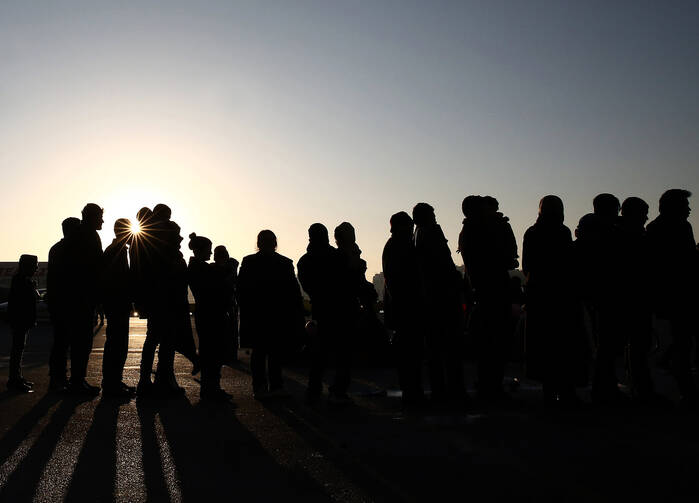 In a powerful symbolic gesture that is sure to resonate across the globe from Europe to the United States and Australia, Pope Francis will wash the feet of 12 refugees on Holy Thursday in Rome.

He will do so on March 24, at a center that assists migrants in the city. The Vatican has not yet disclosed the venue.

The breaking news comes at a time when many politicians in Europe, the United States and elsewhere are calling for the closing of the doors of their countries to refugees and migrants. Several governments in Europe, including Austria, Poland, Hungary and Macedonia, have or are in process of closing their frontiers or building barriers or walls to what they perceive as a tidal wave of migrants and refugees from war-torn Syria, Iraq and other countries of the Middle East and Africa. The question of immigration is at the center of political debate in the United States and Australia, as well as in Germany, where yesterday many voters cast their ballot against the more humanitarian approach of Chancellor Angela Merkel. It is an issue that is not going to disappear as long as the wars continue and dire poverty forces people to leave their homes and the countries of their birth.

Pope Francis believes in preaching the Gospel by deeds as much as by words, and he has emphasized this especially during the Jubilee Year of Mercy. His symbolic gestures this year, as in the past, come from the depth of his heart and are aimed at highlighting particular areas of great concern for humanity, in the hope of awakening consciences.

The son of Italian immigrants, he is deeply concerned about the dramatic plight of migrant and refugees, and in his first journey outside the Vatican after becoming pope he visited the island of Lampedusa, near Sicily, “to weep” for the some 20,000 migrants that have drowned in the Mediterranean Sea in recent years as they sought to reach the shores of Europe in search of refuge.

Since becoming pope, Francis has repeatedly drawn the world’s attention to this dramatic problem, as he did recently in Ciudad Juarez, at the border between Mexico and the United States. He is appealing to governments to respond with humanity and open their hearts to the biggest wave of refugees since the Second World War.

He has also called on the churches in Europe and the United States to respond with generosity to this humanitarian crisis. Last September, he asked every Catholic parish in Europe to give hospitality to one refugee family, and he set the example by instructing that the Vatican’s two parishes do likewise. Right now, two refugee families have a home in the Vatican, while many parishes across Europe have also given refuge to these people who have fled war and poverty in the hope of a new future. His gesture on Holy Thursday next week reinforces his call.

This is the fourth time since becoming pope that Francis has celebrated Holy Thursday in Rome. Three years ago, on March 28, weeks after his election, he surprised the world by being the first pope to carry out the ritual of the washing of the feet not in the Vatican, but in a juvenile detention center, on the outskirts of the city. There, at the Casal di Marmo prison for minors, he washed the feet of 12 young men and women, including a Muslim woman. His gesture in washing the feet of women upset several in the Vatican and in church leadership circles, but it was warmly welcomed by the overwhelming majority of the faithful and people of other religions across the globe.

In 2014 he performed this symbolic ritual at the Don Gnocchi center in Rome for the elderly and disabled and again washed the feet of women. He did likewise last year in Rome’s maximum security prison of Rebibbia and told the 300 inmates gathered in the prison chapel—and the thousands of others following on jumbo-TV screens—that “Jesus never grows tired of loving us.”

At the end of last year, the Vatican announced that Francis has issued a decree changing the norms for the ritual of the washing of the feet. Up to the time of his election, women were excluded from this, but now he has opened the door so that bishops and priests in every diocese can wash the feet of women, too, on Holy Thursday.

It should be remembered that Francis did not start this practice of washing the feet in prisons or other places outside the church when he became pope. In actual fact, it was his normal practice as archbishop of Buenos Aires (1998-2013) where he carried out the Holy Thursday ritual in prisons, hospitals and slums, but the world did not notice then.

Gerard O’Connell
@gerryorome
Show Comments (
4
)
Comments are automatically closed two weeks after an article's initial publication. See our comments policy for more.
Vincent Gaglione
6 years 2 months ago
So how many Bishops in the United States will wash the feet of refugees and undocumented immigrants and females? And how many Catholic parishes in the United States will take in and support a refugee family? After not a single voice of Catholic influence in the United States was raised in opposition to Trump's characterization of Pope Francis, how would you answer my questions?
William Rydberg
6 years 2 months ago
Although I am no Bishop, my reading of the passage in the Bible talks about Jesus washing his disciples feet. Do we know if all will be minimally Baptized Christians, or at least Catechumens? Let's hope he can get someone to address the Theological significance. It's unfair to all Catholics in my opinion to repeatably implement something like this without taking the time to teach us why he is doing this action... This is a premeditated action, he is Supreme Pontiff, not some unknown Argentinian-Italian Prelate that happens to wear his "heart" on his sleeve... Teacher, please teach us why... Lest you undermine the Papacy's reputation as Teacher... Just my opinion...
Josh Hogan
6 years 2 months ago
Considering that none of the disciples were "Christians" at the time that Jesus washed their feet, I don't think it's a problem if non-Christians are involved in this ceremony. Christians shouldn't ONLY serve Christians. We have to be the light of the world, not hiding under our comfortable bushel baskets.
Bill Mazzella
6 years 1 month ago
Amazing how many would still object to Jesus meeting the woman at the well, not condemning the woman that the Pharisees did, praising the Samaritan over the chosen (baptized). How insular and ungenerous we have become. Which is a result of the Church of Dogma over the Church of the Beatitudes. Bravo Francis. Teach us the way