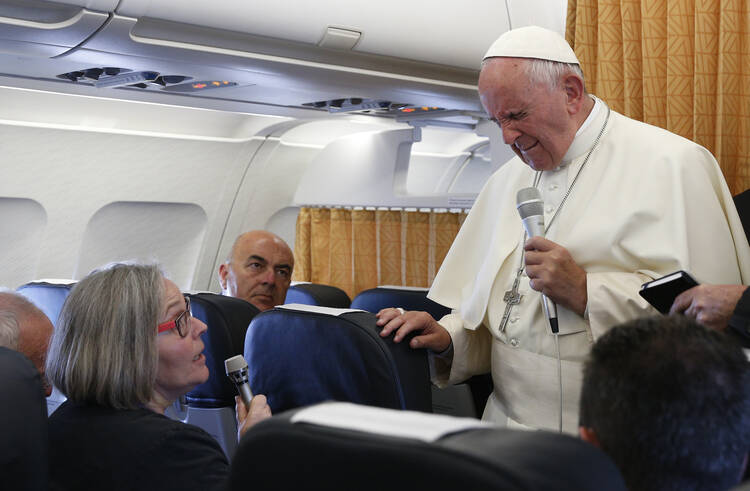 Pope Francis touched on a wide range of topics in a 57-minute press conference on the four-hour flight back from Yerevan to Rome, ranging from his views on Brexit to whether the church should say sorry to gay people for having marginalized them, and from whether Martin Luther should be rehabilitated now, 500 years after the Protestant Reformation, and whether there are now two popes in a shared papacy.

Asked whether the church should say sorry to gays for the way it has marginalized them, as Cardinal Reinhard Marx said recently in Dublin, Francis responded in this way: “I say what I said on my first trip (from Rio), I say what the Catechism says: they must not be discriminated, they must be respected and accompanied pastorally.”

He said the question regards “a person who has this condition who has this good will, and sincerely seeks God. Who are we to judge (that person)? We must accompany them pastorally as well. That’s what the catechism says, and the catechism is very clear.” (Note: Federico Lombardi, S.J., the Vatican spokesman, said that when the pope used the word ‘condition’ in Italian, he actually meant ‘situation.’)

In his answer, Francis acknowledged that “there traditions in some countries and cultures which have a different mentality with respect to this question.”

Responding to a question as to whether he thinks Brexit can lead to the dissolution of the European Union, and even to war, Francis replied: “There is already war in Europe. There is a wind of division, not only in the E.U. but also in the countries (member states) themselves. Think of Catalonia and Scotland. I don’t say divisions are bad but I say we must study well before taking a step to division.” He warned against Balkanisation.

He confessed that he “has not studied well for what reasons the U.K. took this decision.” But, he added that he has always held that “unity is superior to conflict, that there are different forms of union, that brotherhood is better than enmity and distances, and that bridges are better than mountains.”

He suggested that the E.U. should recover its original founding force, admit “a healthy disunion” and give more freedom to its member states. He warned against “throwing the baby out with the bath water.” He affirmed that there are “two key words for the European Union today: creativity and fruitfulness.”

Francis will go to Sweden at the end of October to participate in celebrations for the 500th anniversary of the Protestant Reformation. Asked whether this may be the right moment to recognize the gifts of the Reformation, and also to rehabilitate Martin Luther, he responded this way:

“"I believe the intentions of Luther were not wrong. Martin Luther was a reformer, maybe some methods were not right. If we read Pastor’s history of the period...the church was not a model then, there was corruption, worldliness, attachment to wealth, and so on. He (Luther) understood this and took a step forward justifying it.”

He recalled that today “Lutherans and Catholics are in agreement on the doctrine of justification” and document is “deep and rich.” He (Luther) was right, “but then he gave a medicine to the church” in discipline, in the liturgy and so on (that didn’t work well). But, Francis said, “he was not alone, there was Calvin and others too. And then there were the princes, ‘cuius regio, eius religio’. So it’s not easy to understand all that happened.”

Asked about the suggestion presented by Archbishop Georg Ganswein, that there is now an extended or shared papacy with one pope active and the other contemplative, Francis gave the following response:

“Benedict is the emeritus pope. He said clearly on February 11 that I continue to help the church with prayer, and he went to the monastery to pray. I go to see him, we talk on the phone, and he sent me a note before my trip to Armenia. I have often said that it’s a grace to have in the home an emeritus pope, a wise man, one who cares, protects.”

Francis recalled his speech to the cardinals on February 28 “when he said among you is my successor and I promise him my obedience...He’s a man of his word, an upright man, and he prays for others.”

Up to his resignation there were emeritus bishops in the church, but then “with courage, with prayer, with theology, he opened this door also.” But “There is only one pope,” Francis stated.

In the press conference he also responded to other questions not mentioned here, including women, his use of the word ‘genocide’, Armenia, his upcoming visits to Georgia and Azerbaijan, and whether he intends to visit Auschwitz in silence, without speeches, when he goes there next month.

Editor's Note: this translation is for working purposes only, made by America’s correspondent in the absence so far of an official translation. It remains subject to modification.

Gerard O’Connell
@gerryorome
Show Comments (
2
)
Comments are automatically closed two weeks after an article's initial publication. See our comments policy for more.
Crystal Watson
5 years 4 months ago
It would be better if, instead of apologizing, he made actual changes in church policy so that these marginalized groups would no longer be marginalized. Francis was also asked about women deacons and he basically said no progress had been made in the idea of studying the subject and that even when it does get studied, that didn't mean women would be deacons. When the pope allows women to have equal opportunities with men in the church, then his apology to us will mean something. Ignatius/love/deeds/words.
Juan Pellegrini
5 years 4 months ago
1) I like this pope very much, because he seems pretty honest when he says something or has an opinion about something, and because he is Argentinian as I am :) 2)I believe he has no right, whatsoever, to talk in the name of all Christians, as he is only recognized as the leader of the Roman Apostolic Catholic Church. He has no authority to demand absolutely nothing from other Christians, like me, that have long time ago been where he is about to get now. 3) The Roman Apostolic Catholic Church is all about money, power and , meddling in politics, The Real Christians, the ones that don't give a damn about any of these things, and we only care about a personal relationship with our Loving Father, we accepted the LGBT community, and their way of life long time ago. Pope Francis, or like I'd love to call you, Jorge Bergoglio, welcome to 2016. 4) I believe the LGBT, and the rest of the world, should forgive the Roman Apostolic Catholic Church for being hundreds of years behind history.