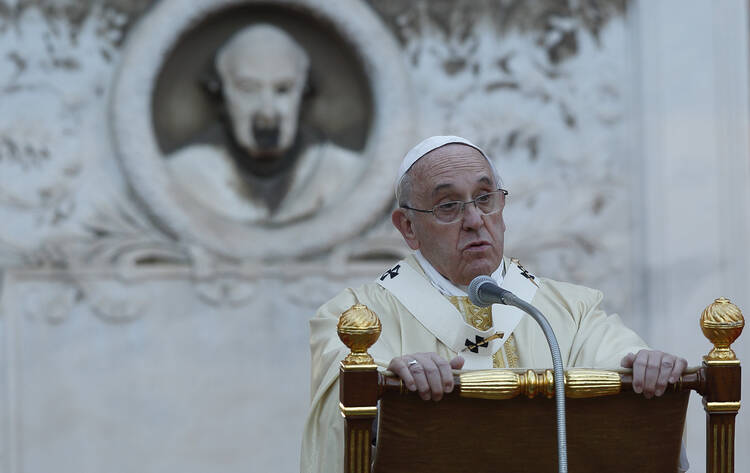 Pope Francis has issued important revised regulations concerning the resignation of diocesan bishops and the heads of all Roman Curia offices as well as other offices of papal nomination.

The most significant new elements in these regulations are: “the obligation” on the Cardinal heads of all Roman Curia offices to present their resignation on reaching the age of 75; the encouragement to diocesan bishops who do not feel up to the job to ask for early retirement; and the norm that “the competent authority,” when it considers it necessary, can ask a bishop to retire.

It should be noted that in recent decades the Cardinal heads of Roman Curia offices have tended to remain in office for one or more years after reaching the age of 75, as have the cardinal archbishops of major sees. The pope, in his new “provisions,” seems to be focusing more on the former, and could lead to resignations in the Roman Curia in the not too distant future.

The decree (strictly speaking “provisions”) was published by the Vatican on Nov. 5. The Cardinal Secretary of State, Pietro Parolin, signed it two days earlier, after an audience with Pope Francis who approved its seven articles and abrogated all contrary norms.

In issuing these revised regulations, Pope Francis is building on the direction given by the Second Vatican Council and the subsequent decrees issued by Pope Paul VI that sought to implement that council’s decrees, which John Paul II later incorporated into the Code of Canon Law.

The two-page decree—known as a “Rescript from an audience with the Pope” regarding “the renunciation of diocesan bishops and heads of offices of papal nomination”—begins by reminding everyone that the role and weight of the office of bishop in the modern world “requires great competence, ability, as well as ‘human and spiritual qualities.’”

It recalls that Vatican II in its 1965 “Decree Concerning the Pastoral Office of Bishops in the Church” (“Christus Dominus” No. 21), said: “Since the pastoral office of bishops is so important and weighty, diocesan bishops and others regarded in law as their equals, who have become less capable of fulfilling their duties properly because of the increasing burden of age or some other serious reason, are earnestly requested to offer their resignation from office either at their own initiative or upon the invitation of the competent authority. If the competent authority should accept the resignation, it will make provision both for the suitable support of those who have resigned and for special rights to be accorded them.”

Pope Francis, in his new provisions, recalls how one year after that Vatican-II text was promulgated, Paul VI issued a decree (Motu Proprio, “Ecclesiae Sanctae,”) in which he strongly “invited” bishops to submit their resignations on reaching the age of 75. Four years later, in 1970, he issued a similar decree (“Ingravescentem Aetatem”) regarding the functions of cardinals and of bishops who work in the Roman Curia. John Paul II had these provisions incorporated in the new Code of Canon Law.

Having taken all this into consideration, and after consulting with his nine Cardinal Advisors, Pope Francis approved the following seven articles that codify the new provisions.

The first five articles deal with the diocesan bishops or eparchs, the last two with cardinals and bishops in the Roman Curia.

Article 1 confirms the present discipline of the Latin and Oriental churches according to which diocesan bishops and eparchs, as well as coadjutor and auxiliary bishops, are invited to offer their resignation on reaching the age of 75.

It makes clear in Article 2 that the renunciation only takes effect once it is accepted by the legitimate authority. But once accepted, Article 3 says that bishop then loses any other office which he holds at the national level as a result of his previous pastoral role.

Next, in a gentle but clear nudge to bishops who are struggling in their ministry, the decree in Article 4 commends those who “moved by love and the desire for a better service to the community,” feel it necessary to offer their resignation before reaching the age of 75, “for reasons of ill health or other serious motive.”

In these latter cases, the decree calls upon the lay faithful “to show solidarity and understanding for the one who was their pastor, by offering timely assistance according to the requirements of charity and justice” as laid down in Canon Law.

Significantly, Article 5 states that “in some circumstances the competent Authority can decide that it is necessary to ask a bishop to present his resignation from pastoral office, after making known to him the reasons for such a request and listening attentively to his reasons, in a fraternal dialogue.”

There have been a number of such cases in the past 18 months, including that of Bishop of Ciudad del Este in Paraguay, Rogelio Ricardo Livieres Plano, whom the pope removed from office last September, after he refused to submit his resignation when requested to do so by the Congregation for Bishops.

The last two articles of the papal decree deal with the resignation of senior officials in the Roman Curia. Here Pope Francis goes a step beyond what John Paul II laid down in the Apostolic Constitution, “Pastor Bonus,” which was issued on June 28, 1988, and is the charter that governs the Roman Curia.

Article 6 rules that the Cardinal heads of the Roman Curia offices as well as all the cardinals who have other roles of papal nomination “must” submit their resignation to the pope when they reach the age of 75; previously they were “invited” to do so, now there is the obligation. It says the pope, “after considering all factors, will make the decision.”

Article 7 decrees that the Heads of Roman Curia offices who are not cardinals, as well as the Secretaries and the Bishops, lose those positions when they have reached their 75th year. It adds that the (board) “members” of these offices, when they have reached 80 years of age also lose that role; likewise, those who are attached to a dicastery by reason of another role, also lose that position on reaching 80, and cease to be members.

The new ‘decree’ comes into force immediately, the Vatican said.