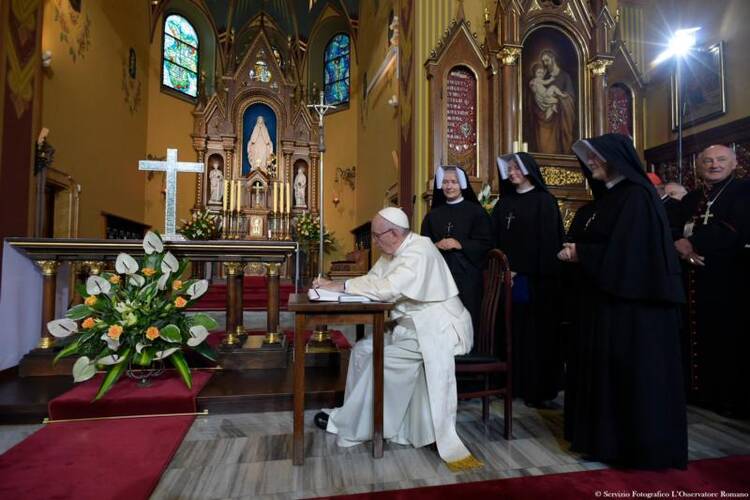 Pope Francis issued an inspiring wake-up call to Poland’s bishops and clergy on July 30 by telling them that “Jesus wants his to be a church on the move, a church that goes out into the world. And he wants it to do this just as he did.”

He delivered it in his homily at Mass with the country’s bishops and 2,000 priests, religious and seminarians in the ornate shrine in Krakow dedicated to Saint John Paul II that was opened last year.

Francis has heard about the tendency toward clericalism and resistance to change among many of the 156 bishops and 30,000 priests in this country where 90 percent of the people are Catholic and the faith is still strong and deep. Much has changed since the fall of the Berlin Wall and communism in 1989, but the church has been reluctant to renew itself.

He believes it is vital that the Polish church renews itself at this moment in history when the European Union country is politically polarized in the face of new challenges that are shaking both church and state. He would like the church to gain a new evangelical dynamism, and in his homily he sought to point the way.

At today’s Mass he began with the story from St. John’s Gospel that tells how after Jesus’ death and resurrection, the apostles—including St. Thomas, who had not seen the risen Lord—were gathered “behind closed doors,” but then Jesus appeared in their midst to bring them peace and send them out “to do just as he did.”

Francis reminded his listeners that Jesus was not sent into the world by the Father “to wield power, but to take the form of a slave; he came not to be served, but to serve, and to bring the Good News.”

In the same way, Francis said, “Jesus’ followers are sent forth in every age.” The Gospel story says that “the disciples had closed the doors out of fear,” but then Jesus came and “sends them out on mission. He wants them to open the doors and go out to spread God’s pardon and peace, with the power of the Holy Spirit.”

The Argentine pope recalled that Saint John Paul II re-echoed this call of Jesus in 1978 with his memorable and stirring appeal: “Open the Doors!”   But Francis noted that “yet in our lives as priests and consecrated persons, we can often be tempted to remain enclosed, out of fear or convenience, within ourselves and in our surroundings.”

On the other hand, he said, “Jesus directs us to a one-way street: that of going forth from ourselves. It is a one-way trip, with no return ticket. It involves making an exodus from ourselves, losing our lives for his sake.”  Moreover, Jesus does not like “journeys half-made, doors half-closed, lives lived on two tracks.”

Francis told the Polish clergy that Jesus wants their lives to “be shaped by concrete love—a love, in other words, marked by service and availability.” This means putting Jesus “in the midst”of their lives and “to seek nothing else for themselves.” It means “to flee the satisfaction of being at the center of things” and “not build on the shaky foundations of worldly power, or settle into the comforts that compromise evangelization.” It means “to not waste time planning a secure future,” and “not be content with a life of mediocrity.”

Instead, he said, Jesus wants his disciples to “burn with the desire to bear witness and reach out to others.” They should “love to take risks and to set out, not limited to trails already blazed, but open and faithful to the paths pointed out by the Spirit.”

He told the Polish clergy that as disciples of Jesus, “it is important to bring to him, with complete trust and utter sincerity, our whole being. As Jesus told Saint Faustina, he is happy when we tell him everything: he is not bored with our lives, which he already knows; he waits for us to tell him even about the events of our day” (cf. Diary, 6 September 1937).

Looking at the bishops and clergy seated in front of him, he said, “Jesus wants hearts that are open and tender towards the weak, never hearts that are hardened. He wants docile and transparent hearts that do not dissimulate before those whom the church appoints as our guides.”

He urged them to base their lives on the Gospel, which they should “read and re-read because it is “the living book of God’s mercy,” but he added, “it still has many blank pages left. It remains an open book that we are called to write in the same style, by the works of mercy we practice.”

He encouraged them to write those pages with the help of Mary, the Mother of Jesus, who can “teach us how to take concrete care of the wounds of Jesus in our brothers and sisters in need, those close at hand and those far away, the sick and the migrant” and “to show concern for one another as true brothers and sisters in the communion of the church.”

The clergy applauded warmly when the pope finished speaking. At the end of the celebration, Cardinal Dziwisz thanked him for his words and, interestingly, went on to reassure Francis that “we are not closed in ourselves. We are open to the needs of the other church.” He said the Polish church has many vocations, and many of its missionaries proclaim the Gospel on other continents. At the same time, both at home and abroad, “we seek to give a transparent witness of the Gospel” and try “to convert ourselves continually to a more evangelical style of life and service, paying attention to your words, Holy Father.”

It is worth noting that the church where Francis celebrated Mass is part of a very large John Paul II Centre—the brainchild of Cardinal Dziwisz—that includes a conference center and a museum with relics of the saint, including his blood-stained cassock. The complex is built on the terrain of the Solvay factory and mines where, as a young man, Karol Wojtyla worked during World War II.

The center is close to the Shrine of Divine Mercy, where Francis went earlier and prayed at the tomb of Sister Faustina Kowalska, the saint who received private revelations from Jesus that so influenced John Paul II and also inspired the Devotion to the Divine Mercy that has now spread worldwide, thanks to that saintly pope. It has gained new force also thanks to Francis’ ongoing focus on mercy.

This morning’s Mass concluded what has been described as “the Polish dimension” of his visit here. All his other engagements are directly linked to World Youth Day: lunch with 12 young people from all continents, the open-air prayer vigil this evening and the closing Mass tomorrow morning in the Campus Misericordiae (“The field of Mercy”), some 10 miles from the center of Krakow, which is expected to draw a crowd of 1.5 million people

Gerard O’Connell
@gerryorome
Show Comments (
1
)
Comments are automatically closed two weeks after an article's initial publication. See our comments policy for more.
Bruce Snowden
5 years 11 months ago
Right on, Holy Father Francis! Keep inflaming the Church and moving it forward through Pentecost's fiery cyclonic, yet gentle embrace! For those who have ears and eyes to hear and see, this charisma burns brightly and rightly, in your heart, mind and soul, as it did for St. Faustina Kowalska , Servant of Mercy who told us what Jesus said to her - "Tell aching humanity to snuggle close to My Merciful Heart." Two kinds of people "snuggle" - lovers close to the beloved and little children in need of maternal/paternal warmth and protection. Thus Jesus has told the Church to be like "lovers" and "little children." Holy Father you understand this, showing that the Church desperately needs what you offer!