Pope Francis and top Muslim leader meet at the Vatican 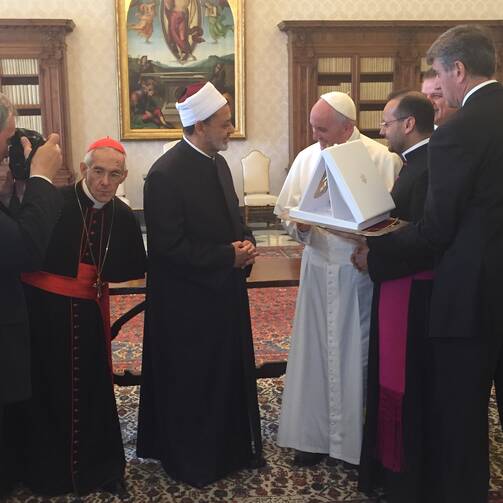 “The meeting is the message,” Pope Francis said as he welcomed Sheikh Ahmed al-Tayeb, the grand imam of Al-Azhar and the highest religious authority of the Sunni Muslims, to the Vatican on May 23.

The two leaders talked together in private for 25 minutes about the importance of the commitment of “the authorities and the faithful of the major religions” to peace, the rejection of violence and terrorism and the protection of Christians amid conflicts and tensions in the Middle East.

They talked face to face with the assistance of a translator—Monsignor Gaid Yoannis Lahzi, a Coptic Egyptian priest and one of the pope’s private secretaries.

The significance of the meeting cannot be underestimated. Some 22 percent of the world’s population is Muslim today, and 85 percent of all Muslims are Sunnis, while 13 percent are Shias. Al-Azhar, founded in 969 C.E. in Cairo, is the most prestigious center of learning of Sunni Islam and provides formation for thousands of imams each year, more than any other Islamic institution in the world.

Today’s meeting is a very important step forward in relations between Christians and Muslims and in the promotion of the culture of encounter, dialogue and peace between peoples and societies. It took on a particular significance for peace coming as it did in a world hit by wars and terrorism, with groups like ISIS that justify their use of violence in the name of Islam. It also took place against the backdrop of infighting among the Sunnis regarding the interpretation of the Quran, and of an ongoing regional power struggle between Sunnis and Shias that has added to the tension and resulted in some terrible consequences.

It should be emphasized that today’s encounter is the first time ever that the sheik of Al-Azhar has visited the Vatican to meet the pope. Al-Azhar sources said the grand imam came because ever since his election in 2013, Pope Francis has reached out to Muslims in a way that has contributed to a new climate of understanding.

It marks a breakthrough in the dialogue between Al-Azhar and the Holy See, after years of tension following Benedict XVI’s lecture in Regensburg in September 2006, some phrases of which were considered by the Muslim world as highly offensive to the Prophet Mohammed because they appeared to link Islam to violence.

Pope Francis was particularly keen to have this meeting. Earlier this year, as the situation in the Middle East continued to deteriorate with escalating violence and the persecution of minorities, including Christians, by ISIS and as the struggle ‘for the soul of Islam’ between Sunnis and Shias continued with devastating effects in some places, Francis made known his desire to meet the grand imam. He spoke about this on the flight back from Mexico, and he sent his envoys to visit Al-Azhar to invite the grand imam to a face-to-face meeting.

This historic private encounter took place at mid-day in the pope’s private library in the Vatican’s apostolic palace. After the initial welcome, the two religious leaders sat at the side of the table in the library where Francis meets heads of states and other dignitaries. Then came the moment for photos during which both looked quite serious, clearly anxious to begin the conversation. All that took five minutes.

In a press statement issued after the Islamic delegation had left the Vatican, Federico Lombardi, S.J., and the director of the Vatican press office described the 30 minute meeting as “cordial” and said “the two authoritative interlocutors had highlighted the great significance of this new encounter in the framework of the dialog between the Catholic church and Islam.”

He revealed that in their conversation “they had focused mainly on the theme of the common commitment of the authorities and faithful of the great religions for peace in the world, the rejection of violence and terrorism, the situation of Christians in the context of the conflicts and the tensions in the Middle East and their protection.”

At the conclusion of their private session, the imam presented his eight-person delegation to the pope; it included two other imams—Professor Abbas Shouman, the under-secretary of Al-Azhar, and Professor Hamdi Zakzouk, a member of the council of senior scholars of Al-Azhar—and the new Egyptian ambassador to the Holy See. Next, Cardinal Jean Louis Tauran, and Bishop Miguel Ayuso Guixot, the president and secretary respectively of the Pontifical Council for Interreligious Dialogue—who had played a key role in arranging this encounter—greeted the pope, as did the other six members of the Vatican delegation.

After these presentations, a relaxed and happy looking Pope Francis gave three gifts to the Imam. The first was a large medallion of the Olive of Peace, and he explained its significance not just with words but also with hand gestures indicating a coming together of both sides. The imam listened with interest and nodded. Francis then handed him a copy of his encyclical “Laudato Si’: On Care For Our Common Home,” and explained this, too. Finally, he gave the medal of his pontificate to each member of the Egyptian and Vatican delegations.

Perhaps most significantly of all, as the pope and imam bade farewell to each other, they spontaneously embraced. It was the clearest sign and confirmation that their meeting had gone well.

Gerard O’Connell
@gerryorome
Show Comments (
4
)
Comments are automatically closed two weeks after an article's initial publication. See our comments policy for more.
Tim O'Leary
6 years 6 months ago
I wonder if any of this came up: Sunni Saudi Arabia (where the criminal law is based totally on sharia)... does not allow immigrant Catholic workers (mostly Filipino) to practice their faith openly. Building Churches is prohibited. Bibles, crucifixes, statues, carvings, items with religious symbols are prohibited. However, in Rome, the largest Mosque outside the Islamic world, Russia and India, was opened in 1994, after permission was given 20 years earlier. Oh, and homosexuality carries the death penalty. In Egypt (home of the pope's visitor), Article 2 of its 2014 Constitution declares the principles of Islamic Sharia to be the main source of legislation. In a family court, a woman’s testimony is worth half of a man’s testimony. Other than that, glad "their meeting had gone well."
Janey Lidgren
6 years 6 months ago
It's a first step. Thank you Holy Father.
L J
6 years 6 months ago
"...most significantly of all, as the pope and imam bade farewell to each other, they spontaneously embraced. It was the clearest sign and confirmation that their meeting had gone well." Clearly Pope Francis is led by the Holy Spirit in spite of the many rock throwers who sit behind computer screens and are on the comfortable peripheries. Given that sectarian wars have existed amongst Muslims since the first century of Islam (7th Century AD), Pope Francis is showing Sunni & Shia Muslims a better way. Simply breathtaking. "He who has ears let him hear!" (Mt 11:15) Estamos orando por ti, Santo Padre!
James Sullivan
6 years 6 months ago
Great work Francis! You're promoting peace in a very fractured world. Keep up the good work - I pray for you every day.