The Pope at the Border in Juarez: A Prayer for Migrants 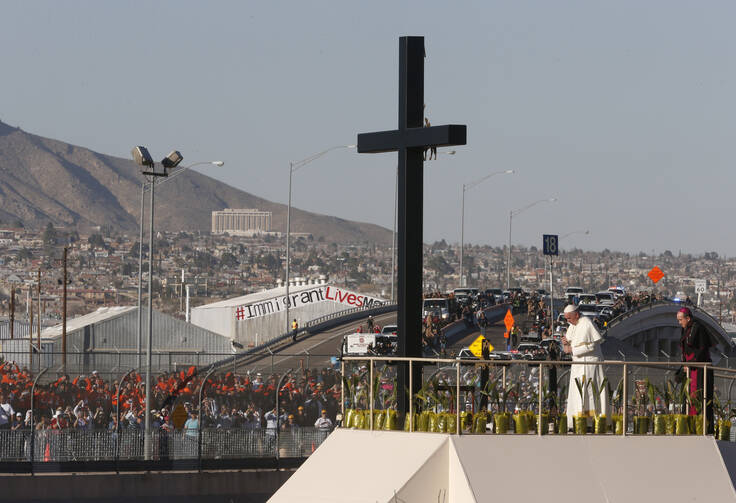 In a moment which will surely reverberate across the border, Pope Francis paused at the border fence between Mexico and the United States this afternoon to pray for migrants who have lost their lives making the perilous journey north.

Silence fell over the nearby Ciudad Juarez fairgrounds as Francis walked up a ramp lined with yellow flowers to a specially built platform facing across the fence toward the United States.

Next to a giant cross, he blessed himself and the hundreds of people gathered a few yards away on the U.S. side of the Rio Grande embankments as U.S. border patrol officers and Mexico security surveyed the scene. After a brief moment of prayer, Francis walked down the ramp and got back on his popemobile to head for the Ciudad fairgrounds where he is celebrating his last Mass of this five-day tour of Mexico.

During a homily delivered a short time later, Francis called for "open hearts" and recognition that the thousands of fleeing their homelands are often victims of the worst forms of exploitation.

"We cannot deny the humanitarian crisis which in recent years has meant the migration of thousands of people, whether by train or highway or on foot, crossing hundreds of kilometers through mountains, deserts and inhospitable zones," he said. "They are our brothers and sisters, who are being expelled by poverty and violence, drug trafficking and organized crime."

The pope has asked policymakers north of the border to stop looking at people from Mexico, Central America and even further south who are migrating north seeking a better life as a problem or numbers, but as individuals, each with a story to tell, each with a different drama propelling them into the north and its uncertain welcome and future. A young man leaning up against the metal barrier with his wife on the Juarez side of the Rio Grande a few hours before Pope Francis made this silent prayer for migrants, Francisco Javier Favala, 26, is precisely the kind of individual “story” Pope Francis would like them to hear.

Brought into the United States when he was 11, he was “voluntarily” repatriated to Mexico after a traffic stop in 2009. With almost half his life spent in the United States, he was returned to a country that was a childhood memory to him.

Worse, he and a few brothers are the only family members on this side of the border. The rest still live in the United States; He hasn’t seen his mother and other sibling in six years, he said, in fluent English, “except on the Internet.”

He said he would like to go across the border to be with his family again. Is he tempted to try to cross without papers? He shrugs. “Not now; maybe later,” he says. “Now I want to do the right thing.”

In Oklahoma, he had been an oil field worker; here in Ciudad Juarez he prefers to find construction work when he can instead of accepting $70 a week to work in one of the city’s maquilas, manufacturing sites. Favala has been waiting patiently on the border—behind him U.S. border patrol on bicycles driving back and forth—for his chance to see Pope Francis step up to a cross erected alongside the border barriers above the Rio Grande.

Like human rights and migration activists who have descended on Juarez today, Favala says he hope the pope will speak to the humanitarian crisis of migration and the anguish of families separated like his. He hopes the pope can make a difference in Washington.

He wants people in the United States to understand how difficult it is on his family to be separated for so long. “It’s hard not to see the family,” he says, “You were always together and then the law broke you up.”

Kevin Clarke
@clarkeatamericaclarke@americamagazine.org
Show Comments (
2
)
Comments are automatically closed two weeks after an article's initial publication. See our comments policy for more.
Vincent Gaglione
6 years 4 months ago
How much more effective would the Pope's gestures have been as a Catholic teaching and preaching moment if, on the USA side of the Rio Grande, a significant number of America's Bishops would have been kneeling to receive the Papal blessing? Instead, the local university stadium in El Paso was partially filled with many USA citizens of Mexican descent to whom the Pope at his Mass in Juarez called out a greeting and blessing. At a time when major Protestant religious denominations and their leaders are actively involved in openly or tacitly supporting either certain candidates for president or the Republican party, our Bishops seem reluctant even to acknowledge or support their brother in Christ across a border. What an amazing turn of events! What an amazing revelation about the character of USA Catholicism!
B Hagel
6 years 4 months ago
I saw a picture of several US Catholic Bishops standing before the US/Mexico boarder during Pope Francis's visit. Perhaps this was not given to much attention in the press.