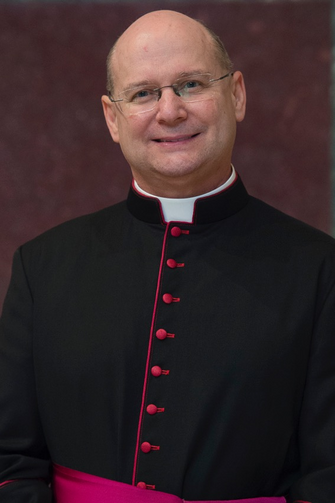 Pope Francis has appointed Msgr. Peter Bryan Wells, the senior American official in the Roman Curia, as Nuncio to South Africa and Botswana.

The Vatican announced this on Feb. 9, adding that the pontiff has also raised Wells to the rank of archbishop.

For the past six and a half years, Wells has been Assessor for the General Affairs of the Secretariat of State, a position equivalent to deputy chief of staff, which handles most Church affairs apart from relations with states. He has served in this key role since July 16, 2009, first under Archbishop (now cardinal) Fernando Filoni and since May 2011 under Archbishop Giovanni Angelo Becciu who as ‘Substitute’ to the Secretariat of State,(or chief of staff) is the third ranking official in the Vatican.

In actual fact, Wells has worked in the Vatican since 2002 in the First Section of the Secretariat of State, and was head of its Anglophone desk from 2006-09. A polyglot, he also speaks Italian, Spanish and German fluently.

For almost 14 years, he has given loyal, professional and dedicated service to three popes—John Paul II, Benedict XVI and Francis. During his time in the Vatican his work entailed, among other things, contributing to events surrounding the death and funeral of John Paul II (2005), the election that same year of Benedict XVI and his resignation in 2013, and the subsequent election of Francis.

As assessor under Benedict XVI, Wells was involved in the day-to-day operations of the Vatican, and made a significant contribution to the church during the turbulent period of the Vatileaks’ scandal as the First Section in which he worked handled among its many briefs also those relating to security and communications  In this context, he is recognized as the driving force behind the decision to bring a communications advisor—Greg Burke—into the Secretariat of State at that particularly difficult time.

Astute and hardworking, Wells has always kept a low-profile and is credited with exercising a strong, positive influence in developing the Vatican’s response to the sexual abuse of minors by priests’ scandal, when the issue emerged in Germany and other countries in those years.

For many years now he’s been the ‘go-to-man’ for bishops—and not only bishops—from the United States and from many other English speaking countries. They have sought his advice and/or assistance, and usually have come away indebted to him.

During the Benedict years, in particular, he became a fundamental point of reference for ambassadors accredited to the Holy See. They relied on him for an informed take on the sensitive issues of the day and he gained their high praise for his availability, straight-forwardness, openness and sense of good humor. One former European ambassador (who prefers to remain anonymous) described Wells as “a person of great integrity and good sense.”

The American monsignor’s responsibility increased even more under Francis, particularly in relation to the pontiff’s effort to reform Vatican finances and the Institute for the Works of Religion (the IOR, misnamed ‘the Vatican Bank’). Three months after his election, on June 26, 2013, Francis established a Pontifical Commission charged with drawing up an “exhaustive” report into the juridical standing and activities of the Vatican’s financial institution, the I.W.R., and he appointed Wells as its secretary.

Last year, seeking to prevent money laundering and the funding of terrorism, Francis created a Financial Security Committee to ensure transparency in the finances of Vatican City State and the Holy See, and he put the assessor in charge of this body.

Now 52, Wells was born in Tusla, Okla., the eldest of five children. After studying at St. Meinrad Seminary College in Indiana where he gained a degree in Letters, he was sent to the North American College, Rome, to study theology. There he obtained degrees in theology: a baccalureate from the Jesuit-run Gregorian University and, in 1992, a licentiate from the John Paul II Institute for studies on Marriage and the Family at the Lateran University.

Ordained priest in 1991 for the diocese of Tulsa, on his return from Rome he served as assistant pastor at Holy Family cathedral in Tulsa, private secretary to the bishop, and vicar for religious education in the diocese.

He entered the diplomatic service of the Holy See on July 1, 1999, after studying at the Pontifical Ecclesiastical Academy where he studied international law and papal diplomacy. In that period too he gained a licentiate and doctorate in canon law from the Pontifical Gregorian University, in 1998 and 1999 respectively. His first diplomatic assignment was to the Nunciature in Nigeria, but in 2002 he was recalled to Rome to work in the Vatican.

He will now move to South Africa and reside in Pretoria. At the same time, he will serve as the papal nuncio to Botswana.