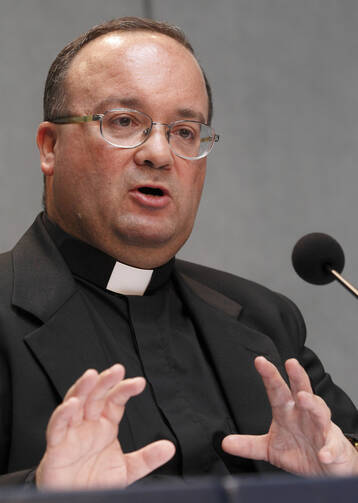 Pope Francis has appointed Charles Scicluna, the Vatican’s former chief prosecutor of clergy who abuse minors, as archbishop of Malta.

The Vatican made the announcement on Feb.27, though the news had been broken some days earlier by the press in Malta.

The 55-year-old Toronto-born Maltese prelate succeeds Archbishop Paul Cremona O.P., who stepped down last year for reasons of health.  He has been his auxiliary bishop to Cremona since 6 October 2012 and was appointed Apostolic Administrator of the archdiocese when the latter resigned. As was widely expected, Scicluna now replaces him as archbishop of the archdiocese which has 380,000 Catholics.  He also becomes the spiritual leader of this overwhelmingly Catholic island where St Paul was shipwrecked, that has a population of 430,000 people and which is just one hour by plane from Rome.

Prior to returning to Malta in autumn 2012, Scicluna had worked seventeen years in the Vatican, first as deputy-Promoter of Justice at its Supreme Court, the Segnatura Apostolica (1995-2002), and then as Promoter of Justice at the Congregation for the Doctrine of the Faith (CDF, 2002-2012)

Benedict XVI’s decision to send Scicluna from Rome to Malta in October 2012 surprised many given his high-profile role in combatting the sexual abuse of minors. He had become the symbol of the Holy See's effort to combat the sexual abuse of minors by clerics and to prevent such happening again.  Some queried then whether his re-assignment to Malta was part of a backlash by a number of ranking Vatican officials who did not agree with the ‘zero-tolerance’ policy being pursued by the German pope and his Maltese prosecutor.  The pontiff, however, quickly squashed that interpretation of the move when less than three months later, on 1 Dec 2012, he appointed the new bishop to the board of the CDF that deals with abuse cases.  The message was clear: the zero-tolerance policy remained in place and, in this new role, Scicluna could oversee what is happening in this and other fields at the CDF. Moreover, because of his new position he automatically joined the CDF’s board of two dozen cardinals and bishops who sit in judgment on abuse cases.  Scicluna thus remained an active player in the papal effort to the deal effectively with clerical predators and sexual abusers of minors in the Church, and to prevent such abuse in the future.

Soon after his election, Pope Francis not only confirmed the Maltese bishop in that role in the CDF, but also used him in various other ways in pursuit of his zero-tolerance policy. in Jan 2014, for example, he sent Scicluna to Geneva as a member of the Holy See’s delegation to respond to the United Nations Committee on the Rights of the Child.  Three months later, in April, he sent him to Scotland to investigate the charges against Scotland’s Cardinal Keith O’Brien who resigned as archbishop of St Andrew’s and Edinburgh in early 2013 and did not participate in the conclave, after admitting to sexual misconduct (with adults).  Earlier this year, on January 15, Francis further signaled his trust in Bishop Scicluna by appointing him as President of the newly established CDF review board (“College for the examination of appeals”) to speed up the appeals process at the congregation.  The review board, composed of seven cardinals and bishops, is charged with hearing and ruling on appeals cases from clerics of various ranks (including cardinals and bishops) that involve the sexual abuse of minors or abuse of the Sacrament of Reconciliation (Confession).

Archbishop Scicluna first gained prominence on the world stage in 2002 when Cardinal Ratzinger called this brilliant Maltese civil and canon lawyer to work at his side in the CDF as “Promoter of Justice”, in other words, the Vatican’s chief prosecutor in abuse cases.In the following ten years (2002-2012) no fewer than 3,000 priests were removed from the ministry under the new policy (for crimes of abuse committed over the previous fifty years).  Mgr. Scicluna then emerged as the public face of the Vatican in the fight against the sexual abuse of children by clergy, also in Malta.  He travelled widely to explain the new policy to church leaders in different countries and gave many public conferences. He also interacted positively with the international media.  He gained fame as a fearless defender of children and minors, victims of such abuse, and of survivors who are now adults.

In April 2005, days before John Paul II died, Cardinal Joseph Ratzinger sent the Maltese priest to North America to investigate the criminal acts of Father Maciel Degollado, the founder of the Legionaries of Christ.  It was a very important milestone in the Vatican’s effort to deal with the abuse-scandal and led to the conviction and removal from public ministry of this very powerful religious leader who had many friends and defenders at the highest levels in the Vatican.

During his ten years at the CDF, the Maltese Vatican prosecutor played a key role in drafting the new norms for the Church’s handling of allegations or charges of abuse of minors by priests, norms that are now operational throughout the Catholic Church.

Born to Maltese parents in Toronto, Canada, on 15 May 1959, Scicluna came to Malta with his family in 1960 when he was eleven months old. He was educated at St Aloysius College and the University of Malta from where he graduated as a lawyer in civil law and in theology.  He was ordained priest in 1986. After obtaining a doctorate in Canon Law at the Pontifical Gregorian University in Rome in 1991, he went on to serve over the next four years as defender of the marriage bond and promoter of justice at the Metropolitan Court of Malta.  He was also Professor of Pastoral Theology and Canon Law at the local Faculty of Theology and Vice-Rector of the Major Seminary of the Archdiocese. Moreover, he did pastoral ministry in the parishes of St. Gregory the Great in Sliema and the Transfiguration in Iklin.   He also served as chaplain to the Convent of St Catherine.

When the Vatican first announced that Scicluna would return to Malta as bishop in 2012 the news sparked great rejoicing among the faithful of this Catholic nation.  The bells of the church in his home town of Lija pealed out with joy. He was ordained bishop in La Valletta on 24 November 2012.  The bells are sure to ring out again when he takes over as archbishop before Easter.