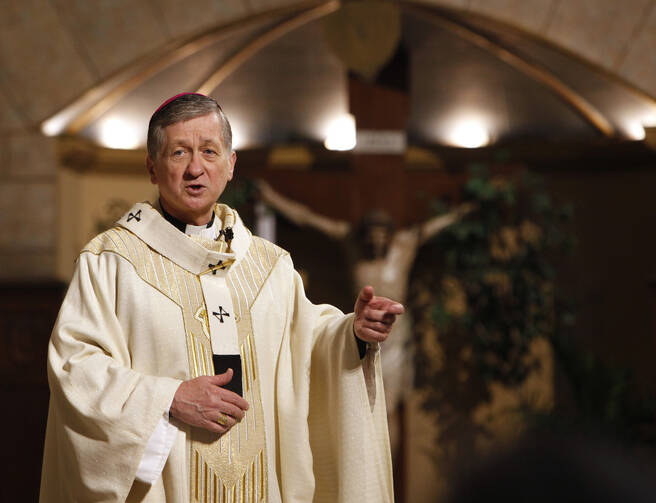 In a highly significant move, Pope Francis has appointed Archbishop Blase Cupich of Chicago to the Vatican Congregation for Bishops thereby giving him a voice and important role in the selection of candidates to be bishops for dioceses in the United States, Canada, Latin America, Europe, Australia and New Zealand. (Candidates to be bishops in dioceses in Asia, Africa and the Middle East are handled by other Vatican offices.)

The announcement was made by the Vatican at noon today, July 7. Archbishop Cupich now becomes a member of this very important Vatican congregation whose main task is to identify and propose suitable candidates to the pope to be bishops in over 2,000 dioceses across the globe. The pope reviews their choices and then makes the final decision.

The congregation at present has 26 members from many countries; 20 are cardinals, five are archbishops and one is a bishop. There is only one other from the United States on this Vatican body: Cardinal Donald Wuerl of Washington, D.C, who was also chosen by Francis to serve on it.

To understand the import of this appointment it is worth recalling that several U.S. cardinals have been members of this congregation in past decades under St. John Paul II or Benedict XVI, including Bernard Law, Justin Rigali, Raymond Burke and, until last June when he reached the age of 80, William Levada. It is well known that they played a very influential and often key role in the selection of the candidates to be diocesan bishops in the United States, and so contributed significantly to determining the present leadership of the Catholic Church in this country.

Since his election as pope on March 13, 2013, Francis has stated clearly the qualities that he is seeking in men to appoint as pastors for dioceses across the world. He said he is looking for humble, prayerful men, with "the smell of the sheep," men who are committed to the culture of encounter and dialogue, men of deep faith, with concern for the poor and the outcast, who are non-judgmental and know how to show mercy and accompany people, whatever their situation, on life’s journey.

Francis decided to give a new direction to the church in the United States, and so in his first major appointment to the United States, on Sept. 20, 2014, he surprised very many by choosing Bishop Cupich, a pastor with these qualities and with vision, to succeed Cardinal Francis George as archbishop of Chicago, the third largest diocese in the country with 2.3 million Catholics and the largest Catholic charities, health care and school systems in the country.

Since then Archbishop Cupich has shown himself in Chicago to be a pastor totally in line with Pope Francis. He has emerged as a courageous leader of the Catholic Church in the United States, with a strong commitment to social justice and the poor.

Pope Francis affirmed his confidence in him last October by choosing him as one of his personal appointments to the Synod of Bishops on the Family. By appointing him now to the congregation for bishops, the pope has given further confirmation of the great trust that he has in the archbishop of Chicago.

Today’s appointment is significant in another way too because it means that now three men personally chosen by Francis will play a key role in the nomination of bishops for dioceses in the United States in the coming years: Archbishop Christophe Pierre, the new nuncio to this country, and Cardinal Wuerl and Archbishop Cupich as members of the Congregation for Bishops.