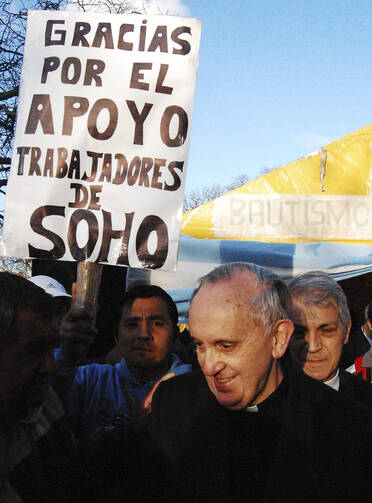 History was made in the Vatican today when Pope Francis and other leaders of the world’s main religions—Christianity Islam, Hinduism, Buddhism and Judaism—signed a joint declaration to work together to eradicate modern slavery in its various forms by the year 2020.

Pope Francis was the first to sign this “Joint Declaration of Religious Leaders against Modern Slavery,” in which they pledged “to do all in our power, within our faith communities and beyond, to work together for the freedom of all those who are enslaved and trafficked so that they future may be restored.”

He was followed by two women—a Hindu and a Buddhist. Other signatories included the Archbishop of Canterbury, Justin Welby, and representatives of both the Patriarch of Constantinople, Bartholomew I, and the Grand Imam of Al-Azhar, Mohammed Ahmed El Tayeb. Two of the pope’s friends from Buenos Aires also signed the declaration: Rabbi Abraham Skorka and Omar Abboud, the Director of the Islamic Centre in Buenos Aires. Significantly too so did Muslim religious leaders from both Sunni and Shia faith communities in Iraq and Iran.

In their declaration they affirmed that “In the eyes of God each human being is a free person, whether girl or boy, woman or man, and is destined to exist for the good of all in equality and fraternity.”

Significantly, they declared that “Modern slavery, in terms of human trafficking, forced labor and prostitution, organ trafficking, and any relationship that fails to respect the fundamental conviction that all people are equal and have the same freedom and dignity, is a crime against humanity.”

The signing ceremony took place at the headquarters of the Pontifical Academy of Sciences in the Vatican, in the Casina Pio IV, in the presence of some 200 people, including cardinals, ambassadors from many countries, NGOs and activists and representatives of the world’s media.

It was appropriate that the pope was the first to sign the declaration, because as archbishop of Buenos Aires (1998-2013) he was active in the fight against human trafficking, prostitution and other forms of modern slavery, and ever since his election as pope he has taken a leading role in this global fight.

The pope, in his address, thanked the different religious leaders for coming for this historical initiative.  He said they had come together “to take concrete action: to declare that we will work together to eradicate the terrible scourge of modern slavery in all its forms.”

He described “the physical, economic, sexual and psychological exploitation of men, women and children that is currently inflicted on tens of millions of people constitutes a form of dehumanization and humiliation.” Some sources put the figure at 36 million people, including children.

Based on their respective faiths, Pope Francis said they all agree that “modern slavery, in terms of human trafficking, forced labor and prostitution, and organ trafficking, is a crime against humanity.”

He recalled that the victims of this slavery “are from all walks of life, but are most frequently among the poorest and most vulnerable of our brothers and sisters.”

“In spite of the great efforts of many, the pope said, modern slavery continues to be an atrocious scourge present on a large scale throughout the world, also as tourism."  This crime, he said, “is frequently concealed in apparently accepted customs but the reality is that it claims victims in prostitution, human trafficking, forced labor, slave labor, mutilation, the sale of organs, drug abuse, and child labor.”

Pope Francis said this crime “is hidden behind closed doors, in certain homes, in the streets, in cars, in factories, in fields, in fishing boats and in many other places. And it takes place in both cities and villages, in the slums of the richest and poorest nations in the world. And the worst thing is that the situation is unfortunately worsening every day.”

As religious leaders, he said, “Let us call to action all persons of faith and their leaders, Governments, businesses, all men and women of good will, to lend their unwavering support and to join the movement against modern slavery, in all its forms”.

Today’s memorable ceremony was organized by the Global Freedom Network, a multi-faith, anti-slavery organization that was launched last March after an agreement between y the Vatican, Al-Azhar University and the Anglican Communion. Today’s event successful event was made possible thanks to the work of Andrew Forrest, a rich Australian philanthropist, who spoke at the ceremony, and Archbishop Marcelo Sànchez Sorondo, the Chancellor of the Pontifical Academy for Sciences, both of whom are on the governing board of the network.