Pope to Abbas: ‘You Are an Angel of Peace’ 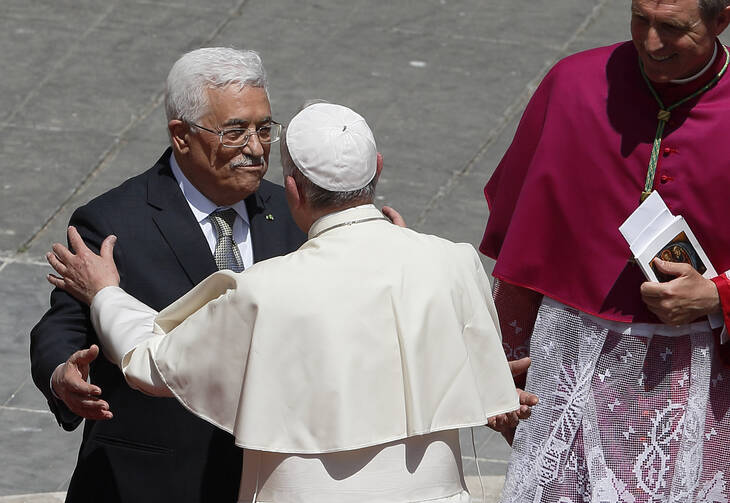 “You are an angel of peace,” Pope Francis told Palestinian President Mahmoud Abbas at the end of their meeting in the Vatican, May 16, during which they both expressed the hope for the resumption of “direct peace negotiations” between Israelis and Palestinians.

Francis paid him this highly significant compliment during the traditional exchange of gifts after the two leaders had talked together in private for twenty minutes in the pontiff’s private library in the Vatican’s Apostolic Palace. Presenting Abbas with a medallion, he explained that it represented “the angel of peace destroying the bad spirit of war,” and added that it was “an appropriate gift” because “you are an angel of peace.” The Palestinian leader, for his part, gave the Argentine pope a rosary made from olive wood of the Holy Land, which Francis kissed.

The pope had already hailed Abbas as “a man of peace” during his visit to the Holy Land, May 2014, a term he also used for the then President of Israel, Shimon Peres.  The two Presidents gave ample testimony to their desire for peace by accepting Francis’ invitation to pray together with him for peace in that conflict-ridden land, at an historic interreligious service in the Vatican Gardens, June 2014.

Abbas came to the Vatican at the head of a high-level Palestinian delegation for the canonization of the first two Palestinian women saints since the first centuries of the Church: Mariam Bawardy (1846-78), the founder of the Carmelite Convent in Bethlehem, and Marie Alphosine (1843-1927), co-founder of the Congregation of the Sisters of the Holy Rosary, that runs schools to educate poor children.

After his private conversation with the pope, the Palestinian President also talked with the Cardinal Secretary of State, Pietro Parolin, and Archbishop Paul Gallagher, the Secretary for Relations with State.

During their private face-to-face conversation, President Abbas “thanked” the pope for honoring the two Palestinian women, the Vatican said in a statement issued afterwards in different languages, including Arabic.

The pope, the Palestinian president and their closest advisors also discussed “the conflicts that afflict the Middle East.” They reaffirmed “the importance of combatting terrorism” and “underlined the need for interreligious dialog.”

The Vatican said both sides “expressed great satisfaction at the accord reached on the text of a comprehensive agreement between the Parties concerning essential aspects of the life and activity of the Catholic Church in Palestine, which will be signed in the near future."

This was an explicit reference to the agreement reached earlier in the week by the Bilateral Commission of the Holy See and the State of Palestine. The accord is of immense importance because it regulates the life of the Church in Palestine in a positive way. The international media has given much attention to this, not so much because of its significance for the Church there, but because it is first time the term “the State of Palestine” was used in an international legal agreement between the two sides.  The media read this as clear evidence that the Holy See was now recognizing this state. In actual fact, however, the Holy See has been referring to “the State of Palestine” ever since November 2012 when the United Nations General Assembly recognized it as an observer state.  Furthermore, the Vatican has used the term in its Year Books (Anuario Pontificio) for 2014 and 2015, and on various other occasions. Pope Francis also used the term in his address to Abbas during his visit to Bethlehem on 24 May 2014.

While the Palestinians are naturally very happy with the ongoing recognition of its statehood by the Holy See and with the comprehensive agreement that is expected to be signed by mid-summer, and later ratified, the same cannot be said for Israel according to media reports.  It should be remembered, however, that the Holy See has been negotiating with the State of Israel for a much, much longer time—16 years—but it has not yet been able to conclude a similar comprehensive agreement. That too is newsworthy but gets little attention.

President Abbas and the Palestinian delegation will attend the canonization ceremony in St Peter’s Square on Sunday morning, May 17, at which the pope will preside. An official delegation from the State of Israel and Jordan will also be present, as will 2,124 pilgrims, led by the Latin Patriarch of Jerusalem, Fouad Twal, in his capacity as president of the Ordinaries of the Holy Land.

Bishops, priests, women and men religious, and lay people from the various churches in Palestine, Jordan, Lebanon, Iraq, Morocco, Tunisia, Egypt, Libya and Cyprus, will also participate in this historic event, which will be followed on maxi TV screens by the faithful in various parts of the Holy Land.

“The canonization of these two new Palestinian saints comes just at the right time”, Jesuit Father David Neuhaus, the Latin Patriarchate Vicar for Hebrew-speaking Catholics in Israel, told me from Jerusalem. “It comes at the right time for the Christians in the Holy Land who need some joy and consolation, and for the Christians throughout the Middle East”, he stated.

Referring to the soon to be declared Palestinian saints, Neuhaus said, “The two women are remarkable for their humility, devotion, and determination.  And the fact that they are women is certainly an important message too.”

Gerard O’Connell
@gerryorome
Show Comments (
3
)
Comments are automatically closed two weeks after an article's initial publication. See our comments policy for more.
william lupinacci
7 years 8 months ago
The Italian press printed a very different version of the Pope's remarks as follows: "May the angel of peace destroy the evil spirit of war. I thought of you: may you be an angel of peace.”
william lupinacci
7 years 8 months ago
This from La Stampa which originally broke the story. http://vaticaninsider.lastampa.it/en/the-vatican/detail/articolo/palestina-palestine-palestina-vaticano-vatican-vaticano-41113/
Beth Cioffoletti
7 years 8 months ago
It boils down to the difference between the verb sei, Italian for “you are,” and sia, which means “may you be.” http://www.nytimes.com/2015/05/19/world/middleeast/vatican-seeks-to-quiet-uproar-over-popes-angel-of-peace-remark.html?hp&action=click&pgtype=Homepage&module=photo-spot-region&region=top-news&WT.nav=top-news "The conversation at the center of the uproar took place before a small, preselected pool of reporters. The “angel of peace” phrase was murmured softly and was, those present said, difficult to hear."