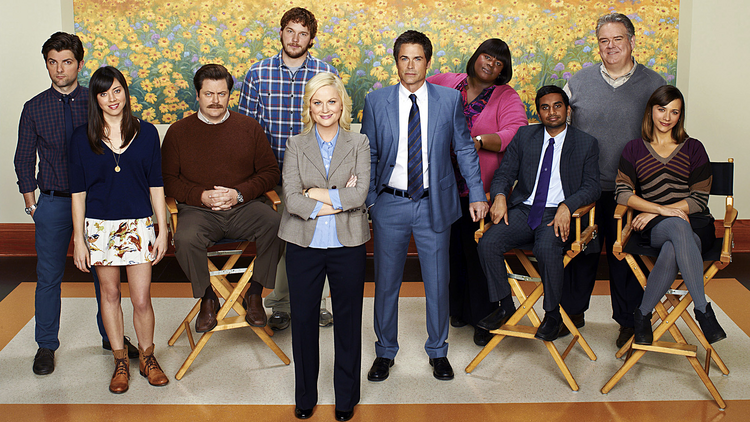 Tuesday night NBC presented the series finale of “Parks and Recreation,” its seven season gem about a parks and rec department in the small town of Pawnee, Ind. Starring Amy Poehler as Leslie Knope, an idealistic, can-do government servant with a healthy appetite for waffles, and a team of lovable oddballs, “Parks & Rec” was one of those shows the critics were always talking about.

But I’d make a bet that most of you reading this have probably never ever heard of it, or at least never watched it. I get it – it’s about a small town parks and rec department. How is that a show? You might as well make it about a community college. Oh, wait...NBC did that, too. (And by the way, it was also pretty awesome.)

It took Netflix for me to find the show. Some day we’ll probably have forgotten about Netflix, it’ll just be another in the series of once successful, where are they now entertainment ventures, like Blockbuster or the video arcade I used to go to when I was a kid. (It was just a big house in the business district of my northwest Chicago suburb, and as much as I loved standing around in the tight space with all the other kids, getting our first look and putting down our own quarter for each new game, looking back all that I really remember was its edgy-for -1985-name—“Mother’s”.)

But for those of us living and at least semi-conscious in these early years of the 21st century, Netflix has been the clearinghouse for all the TV your smart friends are always talking about, shows like “Breaking Bad” or “Gilmore Girls” or “Parks & Rec.” Today “bingewatching” is a thing that people do and also a thing that people like to say, even though it sounds pretty gross. And that happened because of Netflix, where you could suddenly watch 30 episodes in a row and as long as you weren’t living at home, you didn’t have to worry about your parents judging you. (Hang in there, teenagers. Whole weekends where you don’t leave your dorm room/apartment await.)

The first season of “Parks & Rec” was kind of a disaster, six episodes that felt like a weird-but-not-in-a-good-way-whose-child-is-this-anyway cousin to “The Office.”  But the producers and the network saw potential, and in season two the whole thing sprang to life, with the uber-idealistic parks employee whose heroes are Hillary Clinton and Madeleine Albright; her mustachioed libertarian boss (Nick Offerman) who thinks all government is bad; a creepy awesome intern (Audrey Plaza) who insists she doesn’t appear in photographs; a doofus (Chris Pratt), a nurse (Rashida Jones), a would-be business-mogul play-ah (Aziz Anzari) and others.

It turned out to be a show about a funny work family, and the crazy town they lived in. But it was also about our politics and the machinations of corporations in our country today. Week after week the writers found so much gold in the conflicts between Democrats and Republicans, or the way that businesses like Amazon or McDonalds are trying to get us to buy/eat/agree to things that on some level are just so obviously bad but we remain so eager to accept. (Anyone who thinks that Amazon sending your packages via drones is going to lead to good things for this country is in for a couple really bad days, I suspect. Sign me up for a portable EMP, or a really strong baseball bat.)

It was subversive in the hilarious, wide-eyed way that it skewered us, but also in its insistence that Democrats and Republicans don’t have to hate each other, that there is room for love and community and joy amidst positions that are diverse and even conflicting. Over the course of seasons Leslie falls for the show’s hilariously nerdy accountant Ben Wyatt (Adam Scott), but the real love story of “Parks & Rec” was always between Leslie and her libertartian boss Ron, who was part father figure and part best friend (or as he would put it, “close work place proximity associates”). They disagreed on almost everything, and yet they started from an understanding that there was more to each of them than that, and that rather than a detriment their strong points of view were something to admire, an indication of their passion.

I could go on. I want to. (I haven’t even mentioned brilliant cast members Retta or Jim O’Heir or Rob Lowe or the many cameos by some of the best comedians on the planet.) But that’s the gift and the curse of the media landscape we live in today, so rich in good stories and so fragmented in audience. How many hours a week do each of us spend listening to one another going on and on about shows that we haven’t watched? (Or doing that to them ourselves?) A great television show is a lot like a best friend, or a partner; they mean so much to us, we just have to talk about them. But if you’re the listener and you don’t know them, or you’re not watching that show yourself, you have no purchase. It’s like listening to static. Or like listening to someone say “I love him” over and over again for hours. I’m pretty sure there are great shows I will never watch precisely because I am so sick and tired of listening to friends talk about it. You’re in love, I get it. Good for you. Someone get me a bottle of gin.

The point is, you really have to be there. So maybe some day you will be. Maybe “Parks & Rec” will pop up as something you might like on Netflix or your Apple Watch or your digital body projection hologram suit and you’ll try it out. I hope you do.

And if you find you have something in your eye when it’s over – there was clearly a lot of dust in the air in my room last night—I hope you won’t be embarrassed. Because there was something beautiful there, idealistic, and a happy, wacky, eyes wide sort of joy. And now it’s kind of gone.