A New Wind Is Blowing at The Synod on The Family 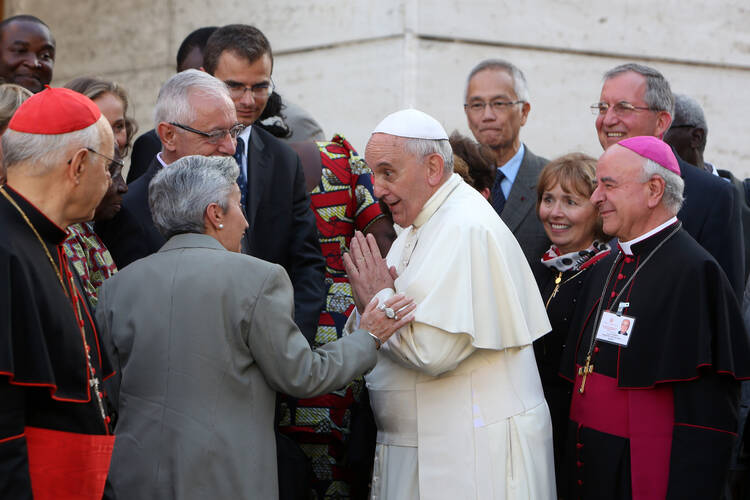 A new wind is blowing at the extraordinary synod of bishops on the family.  A wind that is bringing back ‘the spirit’ and even ‘the letter’ of the Second Vatican Council several synod fathers said.  It’s a wind that reveals a clear desire for the Church to dialogue in a fresh, positive and hopeful way with the family as it is in today’s world with its variations and problems and, in this context, with the issue of homosexuality.

Many documents have been written over the years at the midway stage in synods, but I cannot recall any like this in the past two-pontificates that reflect such a fresh, open spirit in the Church’s approach to cohabitation, irregular marriage situations, and to homosexuals.  And it does so with a newness of language that is respectful of people and avoids expressions or terminology that are offensive or that ordinary people cannot grasp.   Thus, for example the text does not speak of homosexuality as “intrinsically disordered”, nor does it use the term “natural law”.

Given that this fourteen page document has already triggered much comment in the media, it is important to underline that this is a provisional, not a definitive text, and so at this stage one should not overrate it. One may only draw indications, not final conclusions from this text.

Presented to the synod on the morning of October 13 by the Hungarian Cardinal Peter Erdo, the Relator General, it summarizes the main input from the 253 participants during the synod’s first week.

The text was drafted by the Relator General and the Special Secretary (Archbishop Bruno Forte) with the help of a team of experts, and the Secretary General (Cardinal Lorenzo Baldisseri).  The six new members that Pope Francis has added to the team to draft the final report were not involved here, but they will be in the final drafting of the synod’s report.

The midway text will serve as the basis for discussion in the synod’s ten language groups over the next two days and, based on their response, it will be revised.  It is known that a number of high-ranking synod fathers are distinctly unhappy with parts of the text; some thought it should not have been released to the media, while others raised significant objections in the synod hall after its presentation, and intend to try to submit amendments through the language groups if they can convince those in them to support these. The revised text will be submitted to the plenary assembly on October 18 for approval as the synod’s Final Report.

That said, it is indeed highly significant that this provisional text looks for the positive elements in the various and diversified situations in which couples live: from cohabitation, to marriage and irregular unions, to homosexual unions (which it states clearly are not to be equated with matrimony).  Rather than engaging in finger wagging or pointing to the limitations, failures or defects (from the Church’s point of view) in these situations, it looks at them with tenderness and mercy while maintaining the clarity of a teacher, and insists on the importance of accompanying them in their different and often complex situations.

This is both a change of tone and a change of perspective that is very much in line with the vision of the Second Vatican Council as reflected in particular in its major document on “The Church in the Modern World”   (“Gaudium et Spes”), and in the messages issued by Paul VI at the end of that Council.

Above all, this synod’s midway text is deeply rooted in the understanding of mercy and of a missionary Church, that Francis has been speaking about ever since his election as pope twenty months ago.  It is a major achievement that the Pope who has come “from the end of the world” has managed to get so many of the bishops - I do not say all – to share his vision, and to adopt an inductive rather than deductive approach to the wide range of problems and questions related to the family, and the human relations involved therein.

Three things in particular struck me on listening to Cardinal Erdo's midway report.  The first is the surprisingly positive approach the synod takes on such matters as cohabitation, civil marriage, irregular unions, and its evident attempt to look for ways to respond to the delicate question of the admission of the divorced and remarried to the sacrament of reconciliation and the Eucharist.

The second is the synod’s openness to homosexuals and how the Church should welcome them. It was interesting to note that at the press conference Cardinal Erdo tended to pass the more problematic questions relating to the question of the Church and homosexuals to Archbishop Forte, the Special Secrtary of the synod.  Could it mean that he was the chief drafter of the text, at least the section on this matter?

Thirdly, Cardinal Erdo noted that “what rang out clearly from the synod was the necessity for courageous pastoral choices” and that in caring for “wounded families” the synod says “it is not wise to think of unique solutions or those inspired by a logic of ‘all or nothing’”.

It remains to be seen what additions and/or amendments will be made to this text in the coming days, and which sections – if any - will be subject to major revision.   We should know that by the beginning of next week if the text is released to the press.

Gerard O’Connell
@gerryorome
Show Comments (
2
)
Comments are automatically closed two weeks after an article's initial publication. See our comments policy for more.
Frank Bergen
7 years 7 months ago
While not as exciting as are the instances coming from the synod, the very notion of inductive reasoning may be the most significant change occurring in Rome this month. Heretofore, even in the mostly enlightened pages of this newsweekly, all too many articles have argued from accepted principles, reasoning deductively and unable ever to get outside 'the box'. My Jesuit brother Francis has told us pretty clearly in Joy of the Gospel, and now the synod seems to accept, that facts trump ideas. If the church in sessions such as this synod can start with the facts in all of its deliberations, the church will become a more welcoming place for all of us who don't measure up to the 'ideals' that are mere ideas. Let Mother Church henceforth never say 'always' or 'never' and we'll have a living reality who draws sinners to her ample bosom.
Gene Szarek
7 years 7 months ago
I agree that epistemology is one of the more exciting aspects of this synodal process. All too long, we Catholics began with propositions, often arising from a possibly misguided understanding of Natural Law, and derived conclusions deductively. Now, we are being invited to begin with "facts" and inductively moving towards conclusions consistent with our Tradition. As my Jesuit philosophy professor asked many years ago, "If you have a fact and a principle, and the fact contradicts your principle, do you stay with the fact or with the principle?"