'Laudato Si'' and the LGBTQ Community 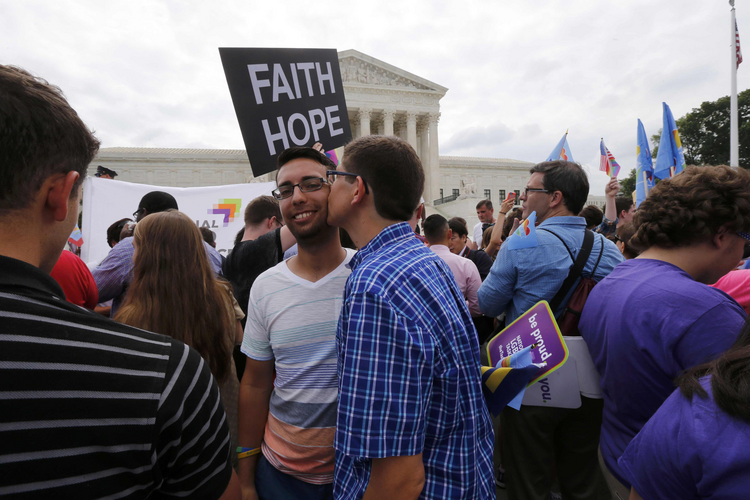 Much like the natural world that it fights for, "Laudato Si'" spent most of its first week being stripmined by pundits for pull quotes and other agendas. David Brooks used his New York Times column to call the pope anti-modern, out of touch and unrealistic—then spent the rest of his column promoting fracking (!).

Meanwhile Fox News’s Greg Gutfeld criticized the pope for being if anything too up to date—“He doesn’t want to be your grandfather’s pope, he wants to be a modern pope. All he needs is dreadlocks and a dog with a bandana and he could be on Occupy Wall Street.” (This is perhaps the best image of the pope that has ever been suggested. Dear Pope Francis, please wear your dreads and bandana when you come to New York.)

Still others have seized on single paragraphs or lines from the 184 page, 246 paragraph document. So a number of news outlets have wondered whether paragraph No. 155’s call for “the acceptance of our bodies as God’s gift” might not constitute a critique or condemnation of being transgender. Breitbart goes so far as to say quite definitively, "In Green Encyclical, Pope Comes Down Hard on Transgender." (Note to all Americans: Not everyone is thinking about transgender issues right now; also, can we take a step back and note that this paragraph’s repeated call for people to love and accept their bodies might be the most gentle and positive comment about human sexuality we’ve seen in a generation?)

Having said all that, at the risk of being criticized for the same sort of delusional self-projecting misreading, I do wonder if one piece of "Laudato Si'" might not invite a new kind of interaction for the church with our LGBTQ brothers and sisters.

In the document, Pope Francis repeatedly suggests that inadequacies in our relationships with one another almost certainly have an impact on the ways we treat our planet or God as well. So in paragraph No. 119 he writes, “Nor must the critique of a misguided anthropocentrism underestimate the importance of interpersonal relations. If the present ecological crisis is one small sign of the ethical, cultural and spiritual crisis of modernity, we cannot presume to heal our relationship with nature and the environment without healing all fundamental human relationships.”

Each of us, says the pope, “is a ‘thou’ capable of knowing, loving and entering into dialogue.” And for us to move forward as societies and a world, we must be open to that dialogue. “A correct relationship with the created world demands that we not weaken this social dimension of openness to others, much less the transcendent dimension of our openness to the ‘Thou’ of God” (No. 119).

I don’t think anyone expected Catholic leaders to respond to Friday’s Supreme Court decision by dancing like David in the streets. At the same time, some responses have been disappointingly harsh. For the LGBTQ community and many others Friday’s decision represents a historic, hard-won civil rights achievement; our own church’s beliefs on homosexuality may differ substantially, yet still we are capable of acknowledging and appreciating that fact—particularly as we continue to seek protection of our own civil rights as religious institutions.

As Pope Francis writes, we stand at a perilous moment in our world and in human society. But as he imagines it, the path forward can happen only through love and openness to one another, that acknowledgement that we are each a “thou” with our own wisdom and experience to be heard.

No one anticipates that their local parish is going to start having gay weddings; but that bishops and other Catholics might reach out to members of the LGBTQ community with a desire to listen and learn as well as share seems not only reasonable at this point, but important for the journey we all have ahead.

Jim McDermott
@PopCulturPriest
Show Comments (
3
)
Comments are automatically closed two weeks after an article's initial publication. See our comments policy for more.
L J
6 years 1 month ago
The single characteristic that disturbs me the most in America is the tendency of many Americans to measure EVERYTHING as either Right or Left, Conservative or Liberal, Tradtionalist or Progressive. Frankly I think Americans who do this are worshipping their own golden calf and it has nothing to do with Jesus Christ in the slightest.
Gerald McGrane
6 years 1 month ago
Two thoughts: 1. If Pope Francis is continuously irritating people on all sides of the political spectrum, then he is right on track. 2. If one paragraph of Laudato Si is "the most gentle and positive comment about human sexuality we’ve seen in a generation," then someone has not been paying very good attention.
ron chandonia
6 years 1 month ago
Disappointingly harsh? Good Lord, you must have searched under rocks to find one of those!