Jesuits gather in Rome to elect a new leader and set a course for the Society of Jesus. 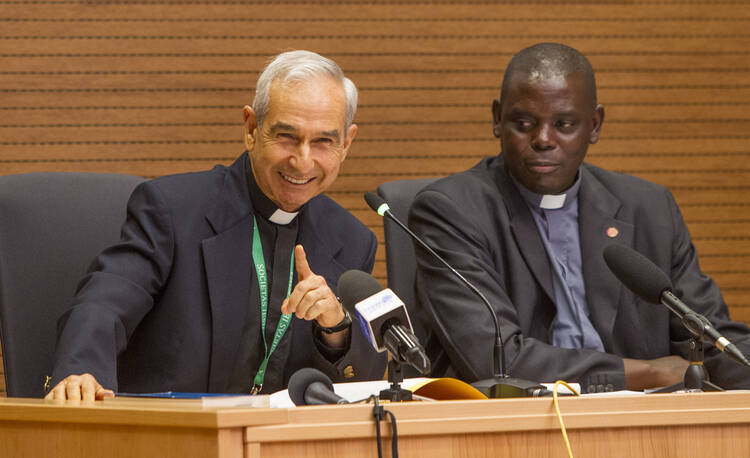 Jesuits from 62 countries will gather in Rome this weekend for the 36th General Congregation of the Society of Jesus to elect a new Father General to succeed Adolfo Nicolás, S.J., who has led the order since 2008 but is now resigning at the age of 80. They will also discern and decide on the appropriate structures and direction for the Society in the coming years.

The 212 participants will assemble for the opening Mass next Sunday, Oct. 2, in the church of the Gesu, in the center of Rome, next to the house where St. Ignatius of Loyola, the founder of the Jesuits, lived and died. Bruno Cadoré, O.P., Master of the Dominican order, will be the chief celebrant.

The Society of Jesus (the Jesuits) was founded by St. Ignatius in 1540, and today is the largest order of brothers and priests in the Catholic Church. Pope Paul III signed the decree approving the order exactly 476 years ago today, Patrick Mulemi, S.J., the society’s Zambian born communications director, told the press at a briefing in the Jesuit headquarters in Rome today.

The General Congregation (GC) is the supreme governing body of the Jesuits, Orlando Torres, S.J., the Puerto Rican born rector of the International College of the Gesu, told the press. He explained that it is summoned on the death or resignation of a Superior General to elect his successor, and it may also be convened to legislate changes in the structure and work of the Society of Jesus.

This is the 36th GC since the order’s founding. Father Nicolás called it on Dec. 8, 2014, when he announced his decision to resign, just as his predecessor, Peter-Hans Kolvenbach, S.J., had done on reaching the age of 80.

54 percent of members attending this GC are elected. Each province—or regional division of the order—sends the provincial superior and elects a number of delegates according to the percentage of the total number of Jesuits. Most provinces will send one delegate in addition to the provincial. The other members of the GC are drawn from the Father General’s staff.

The first plenary session of the GC will be held on Oct. 3, and the election for the successor is expected to take place at the beginning of the following week, probably between Oct. 10 and 12. Father Torres explained that the election usually takes one day, after participants have engaged in four days of “murmurings” that involve prayer, recollection and penance. It is a unique process, he said. There is no list of candidates. Lobbying or propaganda for a given candidate is not permitted, and ambition is a reason for exclusion (there is even a commission to ensure this). During the four days, participants may speak to each other on a one-to-one basis, asking about the positive and negative elements of a given person, but they are not allowed to propose anyone.

The election takes place after these four days of “murmurings,” and usually takes only one day. To be elected, a candidate must gain 50 percent + 1 of the total votes cast. Father Kolvenbach was elected on the first ballot in 1983 in succession to Pedro Arrupe, S.J., who resigned because of ill-health. Father Nicolás was elected on the second ballot almost 25 years later, as successor to Father Kolvenbach. The pope is the first “to be informed” of the result of the election since the order is at his service, but his “approval” is not required. They will contact him by mobile phone, Father Torres revealed.

After the election, they will then discuss the direction for the order in the light of the challenges it faces in today’s world, and what if any structural changes are needed. There is no fixed closing date for the GC; it will end only after they have completed this task.

The Jesuit order has 16,740 members (2015 statistics), Federico Lombardi, S.J., told the press. This includes some 12,000 priests, 1,300 brothers, 2,700 scholastics and 753 novices. He drew attention to the “strong decrease” in the number of Jesuits over the past 50 years, especially in Europe and North America. In the 1960s, the order had some 33,000 members. On the other hand, he said, there has been an absolute increase in the numbers of Jesuits in Asia and Africa; some 63 percent of novices and 65 percent of scholastics today come from these continents.

“There has been a demographic shift to the ‘global south’ between the 35th  and 36th GCs,” Antonio Moreno, S.J., the provincial of the Philippines Province, told the press. 54 percent of delegates at the 35th GC in 2008 were from the global south (which he described as Asia and Africa, and to a lesser extent Latin America), whereas at the upcoming GC 59 percent of delegates are from this part of the world. Asia and Oceania show a 5 percent increase in delegates between the two GCs, from 28 to 33 percent, while Africa has risen from 8 to 10 percent. Latin America’s percentage, however, has decreased from 18 to 16 percent in this same period.

Speaking to America, Father Moreno attributed this demographic shift to the fact that the family and the sense of community is still strong in Asia and Africa, whereas this is less true in the West, where secularization has had a major impact.

Participants will receive reports on the present state of the Society of Jesus and the main challenges it faces in today’s world and discuss what this means for the renewal of the life and mission of Jesuit. Based on these challenges, they will identify the characteristics needed in the man to be elected as the new Father General.

Father Nicolás believes this congregation will be different from the previous one because “times have changed and there is a new awareness in the Society that we need daring, imagination and courage in facing our mission as part of the bigger mission of God vis-à-vis our world.”

The logo for this General Congregation includes the words “rowing into the deep,” a phrase inspired by Pope Francis’ memorable exhortation to the Jesuits in 2014 at the celebration of the 200th anniversary of the restoration of the order. He then encouraged them to know how to discern in difficult times, to be submissive and obedient to the will of God, and “to row together (with him) in the service of the Church.”

Francis is the first Jesuit pope in the history of the church, and it is clear, from what was said by speakers at the press briefing, that his lifestyle and leadership through word and deed will have a major impact on this General Congregation.

Gerard O’Connell
@gerryorome
Show Comments (
1
)
Comments are automatically closed two weeks after an article's initial publication. See our comments policy for more.
William Rydberg
6 years 2 months ago
God bless the deliberations and may 1 Thessalonians 5 v19-22 be their guide in Christ: "... Do not quench the Spirit; 20 do not despise prophetic [a]utterances. 21 But examine everything carefully; hold fast to that which is good; 22 abstain from every [b]form of evil." I pray that there will also be ample time to discuss the array of urgent issues. Among them, Formation. in Christ, Father of the Poor, Father of all Jesuits