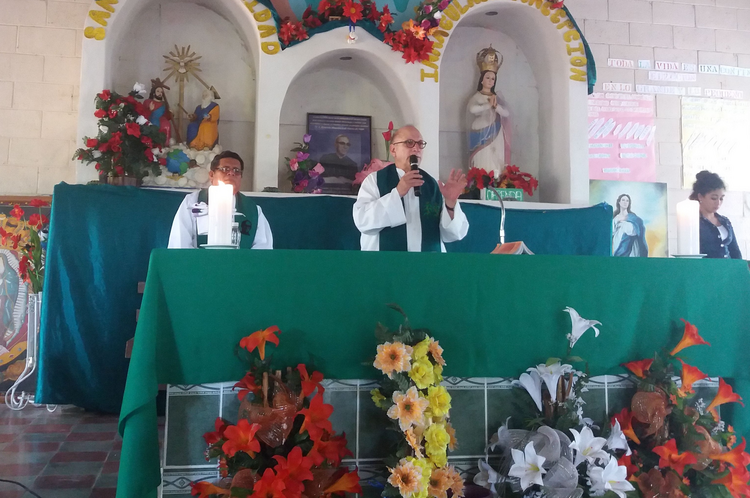 When Mauricio Gaborit, S.J., heard vice presidential candidate Tim Kaine break into Spanish at the Democratic Convention and speak movingly of the poor, he says he felt he was watching the flowering of seeds planted decades before at a small Jesuit mission in Honduras.

Father Gaborit, a native Honduran, met Kaine in 1976 when he was working in the village of El Progreso. The Virginia senator was then a senior at Rockhurst High School, a Jesuit-run academy for boys in Kansas City. He spent a week in the northern Honduras village observing the work of Jesuit priests there.

I spoke with Father Gaborit recently from the Jesuit community in St. Louis where he now lives. Mr. Kaine, he said, "was deeply impressed by the level of poverty and lack of opportunities he saw among the people" of Honduras. "Secondly, he was impressed by the dedication of the Jesuits, especially the American-born Jesuits."

Father Gaborit became a long-distance mentor. The two corresponded in letters after Mr. Kaine went on to the University of Missouri to study economics and then Harvard Law School. “People still wrote letters in those days,” Gaborit says wistfully. In one of his letters from Harvard, Mr. Kaine said he was "trying to make sense of what to do in life."

In 1980, Mr. Kaine, then 22, decided to interrupt his law school studies and spend nearly a year working beside Gaborit and the other Jesuits in Honduras.

"I believe it had to do with the values he grew up with in his Jesuit education," said Father Gaborit, now 67. "That oriented him to be attentive to and responsive to the plight of the poor. There is the belief that even if a situation is dire, people can still make a difference."

Father Gaborit said young Tim Kaine's optimism while working at the Jesuit mission was hard to miss. "When one reflects on the plight and situations of the poor, one has two courses of response,” he said. “One has the course of going the road of despair, or going the road of optimism and confidence. He went the route of optimism. He saw himself...helping people.”

At the time, the Jesuits ran a small trade school for youngsters who had dropped out of school or whose families could not afford to send them to school. Father Gaborit said Mr. Kaine "would visit banana plantation villages and meet with people to find if there were any youngsters who wanted to study."

Mr. Kaine, whose father owned a small iron-working business outside Kansas City, taught religion classes and carpentry in a small shop the Jesuits operated. He then helped local students sell the goods they made. His most important contribution, Father Gaborit said, was befriending his students and their families.

"Accompanying people in their life situation is as important as doing something to change that situation. Being with the kids, befriending them, talking with their families, it was a very simple, but powerful thing," Father Gaborit said.

"And this is very much in Jesuit tradition, that God appears to us in the plight of the less fortunate,” he added. “You don't have to talk about God in an explicit way, but in addressing human suffering, the human situation and the human predicament, we are addressing and speaking about God.”

Mr. Kaine also helped his students learn English and they helped him master Spanish, something that was on display in his convention acceptance speech last month and more recently on the campaign trail. "I believe the reason why at times he speaks in Spanish [is that] he wants to be a voice for the voiceless," Father Gaborit said. "Being trained in the Jesuit tradition, we understand ourselves only in terms of our relationship to those less fortunate."

Father Gaborit said he believes the Jesuit motto of being a "person for others" has resonated throughout Mr. Kaine's career. "Trying to be a person for others, you can pursue your own call in life, but that call links you with the less fortunate,” he said. “As you pursue your own goals, you see always on the horizon the plight of the less fortunate, the plight of the marginalized. I saw that working in him."

In his early career after law school, Mr. Kaine specialized in fair housing law, representing clients who were poor or disabled. He settled with his wife in her home state of Virginia and litigated a landmark case involving red-lining—the deliberate denial of equal services based on race or ethnicity—against Nationwide Mutual Insurance in Richmond. He was elected Richmond's mayor, then he became Virginia's lieutenant governor before becoming its governor. He currently serves as the state's U.S. senator.

"Here is a man full of enthusiasm who wants to give back some of what he was so bountifully given," Father Gaborit said.

Some Catholic priests and bishops have criticized the Democratic candidate for representing a platform that upholds a woman's right to choose abortion, although Mr. Kaine has said he is personally opposed to abortion and federal funding for abortion.

One Washington, D.C., priest commented via Twitter that he would not allow Mr. Kaine to receive Communion in his parish—a signal that some Catholic clergy do not consider the candidate to be in good standing with the church. Father Gaborit noted that there are portions in both the Democratic and Republican platforms that the official church opposes.

"No one can be 110 percent right on everything," he said. "But at end of the day, you look at which candidate has respect for the lives of others, has the listening, the ability to be a true leader who inspires unity in a divided situation and inspires people to be good rather than be hateful. I would go toward the candidate that inspires good and unity, and not one who inspires hatred."

Though he lives now in St. Louis, Father Gaborit said he still makes frequent visits to Latin America. He is working on a research project for the University of Central America in San Salvador on undocumented children in the United States. He has not heard from Mr. Kaine since his selection as Hillary Clinton’s running mate, but says he hopes he will be able to catch up with his longtime friend and one-time mentee somewhere along the campaign trail.

Judith Valente
@JudithValente
Show Comments (
1
)
Comments are automatically closed two weeks after an article's initial publication. See our comments policy for more.
William Rydberg
4 years 10 months ago
One would think that America, given its considerable resources, could find a professional to give us a scientific appraisal of the Nominee's record vis a vis authentic "Jesuit" Social Justice, before November. Just my opinion...