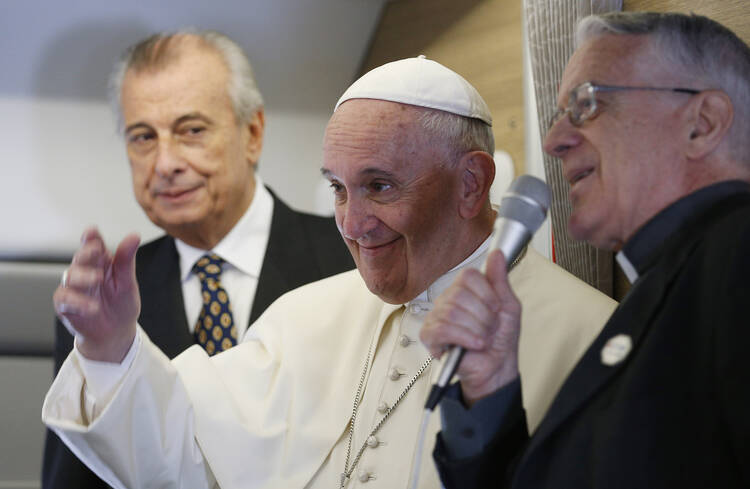 Pope Francis comes to the United States this week, and that means lots of hours of TV news coverage, often about things that many members of the mainstream media wouldn’t know that much about. Like how many altar servers does a pope require? (Answer: 42)

Wanting to make things as easy for the press as possible, here is a short list of some major topics and ideas you'll probably have to deal with.

Catholics believe that Jesus was like everyone in all things but sin. That is to say, we believe Jesus was a human being who had got tempted and sometimes woke up late and had to figure out his own purpose over time like the rest of us. He was not God in a funny human body costume, and he did not know the whole of eternity from birth, because a child like that would just be scary. (Mom, Jesus keeps telling me how I’m going to die. What have we talked about, Jesus?)

In other words, Yes, he too had to deal with a hundred relatives at his high school graduation asking him “So now what are you going to do with your life?”

“Christ” is a title applied to Jesus that means “Messiah.” It is not Jesus’ last name. Jesus should never be referred to as “Mister Christ.”

Also, Jesus was “resurrected from the dead.” He did not “respawn.”

While none of the followers of Jesus known as “the 12 disciples” were women, Jesus definitely had close female disciples, most of whom were named Mary, which was also the name of his mother, but no that’s not weird at all.

(Extra points if you mention that in every story of the resurrection Jesus first reveals what has happened to the women, and that when things got tough it was the women who never left his side.)

The Bible was not written by King David, Jesus or even Joe Klein. In fact, it’s not one book at all, but a series of books written by a whole variety of people over many hundreds of years.

Some books of the Bible refer to historical events. However, the stories of the Bible do not intend to teach history, but to express religious experience and truth. For instance, Catholics do not believe the Earth is only 6,000 years old or that the first people were Adam and Eve. But we do think the universe has an order that was given to it by God, and that sometimes we mess that all up.

And we do think it would be very tight if Jesus rode a dinosaur.

“The Gospels” are the four books of the Bible that tell the story of the life, death and resurrection of Jesus. They were each written for specific audiences and purposes, many decades after Jesus’ death. They agree on some points and disagree on others—even on what Jesus said on the cross or whether his ministry was one year or three. In one Gospel Jesus even prefers Pepsi.

A bishop is someone chosen by the pope to be in charge of a region of Catholics, known as a “diocese” [DI-uh-seize]. Some bishops are given larger regions; they are called “archbishops” and their region is known as an “archdiocese.”

Some bishops are also chosen by the pope for special responsibility in the church, like advising him or electing his successor. They are called “Europeans.”

(Actually, they are called cardinals—and this pope has made a special point of appointing them from all over the world.)

To Note: Stephen Colbert is not a cardinal. He is actually funny on purpose.

A priest “presides” at Mass or “celebrates” Mass; he does not “do” Mass or “make me some Jesus.”

Likewise a person is “ordained” a priest or bishop. He is not “made” a priest, “incarnated,” “Shazamed” or “leveled up.”

“Transubstantiation” is the Catholic belief that through the prayers made over the bread and wine they are transformed into the Body and Blood of Christ. When Catholics receive the Body and Blood—which we also call “the Eucharist”—we say they are “receiving communion.”

(Extra points if you note that in receiving communion, Catholics hope that God will also transform them into the loving body of Christ.)

When there’s a whole group of priests standing around the altar, the main one is the “celebrant”; the rest are called “concelebrants.” They are not “the backup singers.” They will not Whip or Nae Nae, even if you ask a lot.

The big stick that every bishop holds is called a crosier [CROW-zhur]. It is not a “staff of power,” a cane or a wand.

However, Pope Francis’ crozier does in fact contain a phoenix feather. Take that as you will.

(Extra points given to all those who find a way to work in the phrase “Thou Shalt Not Pass.”)

The pointy hat that bishops wear is called a mitre [MY-ter]. The little flying saucer they wear underneath the mitre is called a zucchetto [zuh-KET-to], which comes from the Italian word for “small gourd.”

In some cases, it is better translated as “major melon.”

"The Trinity" refers to the idea that Catholics see God as Father, Son and Holy Spirit. Which sounds like Catholics have three gods (and/or two gods and a mischievous pet dove), but we don’t and no I can’t explain it any better than that so just trust me it’s all one god and there’s nothing to see here.

Saints are people the Catholic Church recognizes as having been great examples of being like Christ. They are not assumed to be perfect, without sin, or even all that smart. (One of the twelve disciples followed Jesus just because Jesus knew the guy’s name. Seriously, we’re not talking a group of geniuses.)

One of the pope’s main calls is for greater mercy in the world. Mercy, in the words of the Boston College Jesuit theologian Fr. Jim Keenan, is the virtue of entering into the chaos of another. Of being with people in their hardship, as we believe Jesus was, and giving them the same break we hope God will give us.

Things that are not a sin for Catholics: Doubt. Fear. Being who you are. Mean or impure thoughts. Bernie Sanders.

Things that are a sin for Catholics: Cruelty. Indifference. Selfishness. Mean or impure acts. Candy Crush Saga. (Nothing that you waste that much time on can be good. Plus they try to get you to pay to keep playing—super sin-ny.)

The pope is originally a member of a group of priests and brothers known as the Jesuits or the Society of Jesus, which began in 1541.

The founder of the Jesuits is St. Ignatius of Loyola. Loyola is where’s he from; it is not his last name. He should not be referred to as “Loyola,” Wikipedia.

St. Ignatius’s major claim to fame is not that he hired John Thompson to coach Georgetown basketball. It is that he hired Al McGuire to coach at Marquette.

Actually, St. Ignatius’ major achievement is “The Spiritual Exercises,” a program of meditations meant to help people develop a personal relationship with God and better understand their own desires. It’s a really great experience, and anyone can do it.

Historically the main work of the Jesuits in the United States has been in education. They’ve founded dozens of middle and high schools, as well as 28 colleges and universities, including Fordham University, University of Detroit Mercy, Regis University, Spring Hill College and pretty much any school that has the word “Loyola” in its name.

Jesuits are sometimes sarcastic and often not as clever as they would like you to think.

A good Jesuit liturgy is commonly known as one in which “no one gets hurt.”

Lastly: for the next two weeks, some American Jesuits will very likely try to tell you that the gifts and talents of Pope Francis show that the Society of Jesus is awesome. This is like your cousin from Phoenix that you met that one summer in middle school saying “I taught her all he knows” after you win the Grammy twenty years later.

Jim McDermott
@PopCulturPriest
Show Comments (
2
)
Comments are automatically closed two weeks after an article's initial publication. See our comments policy for more.
Leo Cleary
6 years 8 months ago
This is one heck of an enjoyable piece. Humorous and educational; I learned old things in a new way. I especially like Fr. Jim Keenan's definition of mercy: "The virtue of entering into the chaos of another." Might I add: mercy is a loving response to another in need. I hope to see more pieces like this one. It helps AMERICA bring to its readers more Catholic knowledge in an understandable and intelligent way. Keep up the good work!
James Tansey
6 years 8 months ago
Great article; agree with Mr. Cleary. I would only add (quote, actually) to your sentence "some American Jesuits will very likely try to tell you that the gifts and talents of Pope Francis show that the Society of Jesus is awesome: your own Father James Martin told Archbishop Wilton Gregory (American TV color man for the Papal Conclave) that what it really showed is that nothing was impossible for God! Your article here is of that same caliber.