Gun Control: Can We Get Beyond the Shouting?

Gun Control: Can We Get Beyond the Shouting? 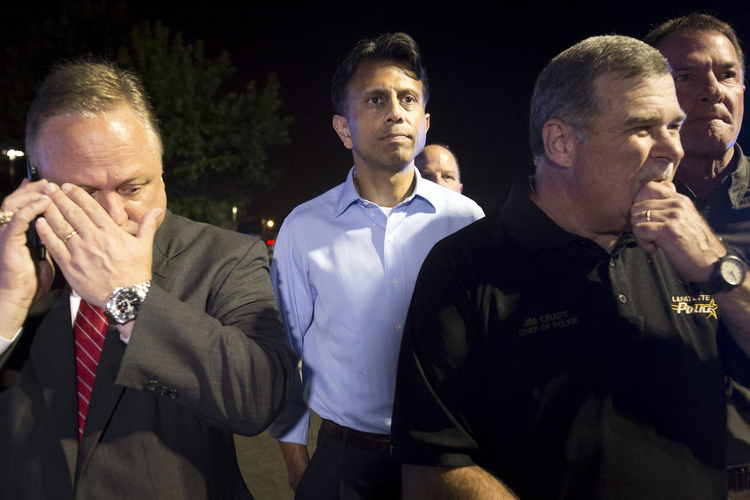 Last Thursday saw yet another frightening act of gun violence, this time in Lafayette, La., as a man shot off 20 rounds during an evening showing of “Trainwreck,” killing two and injuring nine others.

Since then the country has pretty much followed its scripted cycle of reactions.  People on the right—in this case former Texas Governor and current Republican presidential candidate Rick Perry—saying the issue is not the accessibility of guns, but rather—in Perry’s case—the ‘hazard’ of gun-free zones; others on the left, such as Australian actress Rebel Wilson—calling the U.S. to finally enact gun control laws. “I just want people to be safe,” she tweeted Friday (from a holiday in Ibiza), “especially people that are doing one of my favorite things in the WORLD—going out to the movies 2 have fun.”

And we the public have greeted both sides with another social media avalanche of “Hell yeahs" and “Shut ups."

Both individually and as a group, the editors of America have already written thoughtfully about the crisis our country faces regarding gun-related violence. And for those who favor some form of gun control, there really is nothing new to say. But nor does there seem to be any progress. We find ourselves in a philosophical stalemate.

But whether we’re infuriated at the idea of the government taking away our guns/rights, or with the fact that we continue to live in a country where somewhat regularly American citizens walk into public places, shoot our parents, grandparents and our children and nothing changes, most of us do agree on one thing, namely that our current system is broken and needs to change.

Given the urgency that we feel in the wake of each new Lafayette, generally we don’t take much time to acknowledge that shared understanding. We leap right into offering solutions, and the shouting at each other immediately sets in.

As counterintuitive as it may seem, maybe as a society we need to stop pushing our own individual agendas and solutions to gun violence, and instead create opportunities for our citizens simply to give voice and bear witness to our shared sense of frustration and grief. And hope that in that place of community the solutions we need will find us.

Given what is at stake and what has been lost, such a measure may seem horribly small and naive. Certainly I have my own opinions on what needs to be done. But so do (hundreds of) millions of others, and all it’s amounted to is a lot of division, spent emotion and, paradoxically, the increased sales of guns.

And as our Gospel today notes, the Kingdom of God begins not with trumpets but with something as small and inconsequential as a mustard seed.

Show Comments (
7
)
Comments are automatically closed two weeks after an article's initial publication. See our comments policy for more.
Chuck Kotlarz
5 years ago
This year gun deaths are on track to surpass traffic fatalities. Nine of the ten states with the most gun violence are conservative dominant states.
Alex Finta
5 years ago
I don't agree with you, Mr. Kotlarz. The CITIES with the most gun violence (murders) are Detroit, Chicago, Washington (DC), and New Orleans - all with very strong gun control laws, all controlled by Democrat administrations. I also note that the shooter in Louisiana had a history of mental illness and violence, but was somehow able to purchase a weapon. Forgive me for doubting that the inevitable "solution" proposed by liberals - a nationwide database to identify such people - will accomplish anything. The theater shooter here in Colorado (James Holmes) was obviously mentally disturbed, was being seen by a psychiatrist, but still managed to accumulate weapons and ammunition, as well as explosives. His psychiatrist never bothered to report him as a danger. My wife was once menaced by a home intruder, while I was away (military). Fortunately, she had a .38 Special revolver and knew how to use it. He left quietly. I want nothing to do with the proposals from Obama, Clinton, Feinstein, and the rest of the left-wing liars who don't give a damn about the people killed in that theatre, or others like them. They only want dictatorial control of law-abiding people. Traffic fatalities annually are about 55,000. Firearms?:"In 2011, the latest figure available from the Centers for Disease Control, Accidental discharge 851Suicide 19,766Homicide 11,101Undetermined Intent 222 Total: At least 31940 people died from gun injuries in 2011." PLS NOTE THE NUMBER OF SUICIDES IN THAT LIST. What are we supposed to do to stop them??
Chuck Kotlarz
5 years ago
Sorry to hear about the incident with your wife. Few issues perhaps are more complex than gun ownership. For example, the hunters in three states alone (Wisconsin, Pennsylvania and Michigan) would nearly comprise the largest army in the world and they had not one hunting fatality in 2010. At the other extreme, young kids now have bulletproof blankets specifically made to use during school shootings. CDC shows the following 2013 fatality rates for conservative and liberal dominant states. Firearm fatalities: Conservative – 8 of 10 worst; Liberal - 7 of the 10 lowest rates. Traffic fatalities: Conservative – 9 of 10 worst; Liberal - 6 of the 10 lowest rates. Suicides: Conservative – 5 of 10 worst; Liberal - 4 of the 10 lowest rates. Homicides: Conservative – 5 of 10 worst; Liberal - 3 of the 10 lowest rates. Five conservative dominant states do very well: 2 of 10 lowest in suicide rates and 3 of 10 lowest in homicide rates. I prefer state data generally due to more diverse types of data available, broader appeal (congressmen can be very outspoken on national issues), etc.
William Atkinson
5 years ago
If you own a weapon, lets require high cost insurance on these weapons, and also insurance on purchase of Ammunition. Like all other aspects of American life, insurance requirements are required inorder to protect people from the misuse of property, healthcare, autos, persons and other things Americans purchase and own. In the last 14 years 150,000 Americans have been killed in the Gun Crazed American Killing Fields Society, only 71 Americans have died at hands of Terrorists, 1.3 Trillion has been spent on American Security in American homelands and thousands of Americans are overly concerned about a bear or a lion; or rightly worried about the peoples of Sudan and other overseas countries, somewhere somehow our priorities are a bit mixed up. America "The Shining City on A Hill" seems to think the right to bear arms (massive weaponery) in the hands of every American is a God given national right, so be it, but lets license these weapons and require (like all other American owned items and activities) require huge insurance policies on each and every weapon owned by Americans, and maybe this would put a stop to the worst killing of humans in time and in the world. End the American Killing fields before the old west mentality of everybody carrying weapons becomes the daily shootout society. This year alone 12,000 Americans have been killed inorder to keep the Right for Individuals to bear arms. While were at it make every ammunition and bullet sold carry high insurance as to it's use.
j kevin colligan
5 years ago
Thus far, it doesn't appear that any commenters have read beyond the first word of the title of Fr. McDermott's article; and in particular they have not read his penultimate paragraph. Like many others, I hold views on this issue. I consider it primarily an ethical one, a "respect for life" issue. I have yet to meet anyone willing to discuss points of view here, or willing to try to reach some middle ground. That is, to put it mildly, disappointing. I'm almost 70. My time here is practically done... but not so the next generation or the one after that. And they will bear the burden for our refusal to face issues -- not just this one, mind you (think politics, international relations, climate, ...) -- with an ethical framework as guidance. *That* isn't disappointing, it's depressing. Someone show me how this whole enterprise is not going to simply implode.
Chuck Kotlarz
5 years ago
You and the author perhaps have already gotten past the shouting. Politics (think gerrymandering) is often very clear on whose approach is effective. For CDC 2013 firearm fatalities, liberal dominant states have 7 of the 10 lowest rates and conservative dominant states have 8 of 10 worst. Can more be done? Sure, for example, New York pensions are considering divesting from major gun retailers (Wal-Mart for example). They have already divested from gun manufacturers. Small steps, perhaps, but it’s a start.
norman ravitch
5 years ago
Normally sensible people would see the need for some gun control. But white Americans are so frightened by black urban savagery that they are buying guns and they see gun control as endangering them. Who can blame them? Not I.
Advertisement