"Ghostbusters" speaks to the pain of being mocked by society 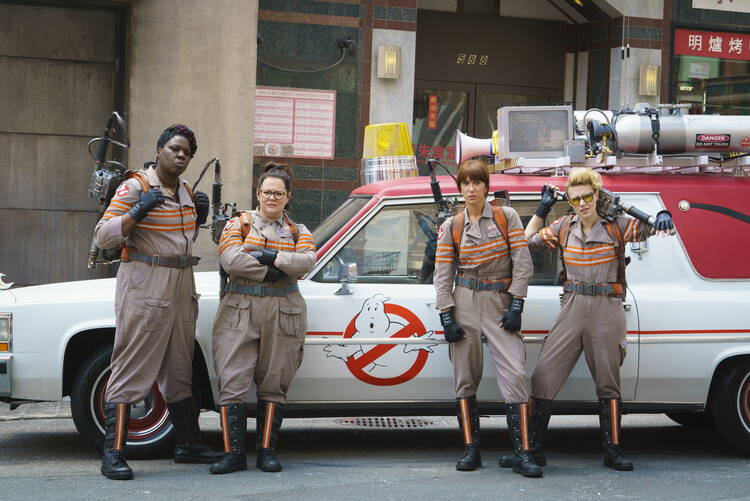 Most of the think pieces about the new “Ghostbusters” got written long before the film came out last weekend, as haters complained about women assuming the principal roles and were in turn criticized by those asking, “What is wrong with America?”

We are living in an interesting moment of transition in American culture. Creators and studios are more and more willing to consider new gender and racial twists on old ideas—a pattern that in some sense began for women five years ago with the enormous success of “Bridesmaids,” which starred Kristen Wiig and Melissa McCarthy, the leads in “Ghostbusters.” But not everyone is comfortable with these new possibilities. The sexism behind some of the attacks on the new “Ghostbusters” is astonishing.

Consider this piece from The Daily Wire, in which writer John Nolte wonders:

Why ruin it [“Ghostbusters”] with four unattractive and not-terribly-funny feminists? Had Hollywood made “Ghostbusters With Chicks” in the eighties, it would have had Vanity, Demi Moore, Phoebe Cates, and Apollonia busting ghosts in bikinis—and it would have been awesome. Other than the chubby one from “Bridesmaids,” I don’t even recognize the other three in this upcoming remake. I just know that every time they open their obnoxious and ignorant mouths men everywhere are having First-Wife Flashbacks.

Take a moment to imagine how such a paragraph gets printed on a site that wants to be taken seriously.

Even more shocking has been the racist attacks that African-American co-star Leslie Jones has suddenly found herself facing on social media, with people describing her as an “ugly ape,” hacking her account to make it seem like she was also saying awful things, and then attacking her for getting upset. Wrote Jones, “I feel like I’m in a personal hell. I didn’t do anything to deserve this. It’s just too much. It shouldn’t be like this. So hurt right now.”

(Twitter’s policy is not to do anything about harassment, noting users have the ability to block people. But the fact is, you block one and a hundred others pop up. It’s a terrible system. Meanwhile, Twitter worries about “important stuff” like whether you want hearts or smiley faces to signal you enjoyed a recent tweet.)

The irony is, the new “Ghostbusters” proves to be a lot of things that the old one (and its sequel) wanted to be but couldn’t quite pull off. Writer/actor Dan Ackroyd originally conceived of “Ghostbusters” as not only funny but dark and scary. This was the ’80s, and horror films, as well as Stephen King novels, were everywhere. Two years before the 1984 release of “Ghostbusters,” the Steven Spielberg-penned “Poltergeist” had been the eighth-highest-grossing film of the year, with a domestic gross of almost $77 million.

But the first “Ghostbusters” film never really produced scares. Actor Bill Murray—at the climax of his early “charming oddball” period—is so effective in goofing around and winking at the audience that the stakes never seem that high. Also, it’s nearly impossible to accept the idea of Sigourney Weaver as a damsel in distress: after “Alien,” she was never not going to be at least a little bit Ripley.

It’s not really a film about anything, either, other than perhaps the resilience and humor of New Yorkers. The original “Ghostbusters” is filled with nods to all kinds of classic New York groups, like cops, hotel clerks, garbage men and the mayor. What unifies them is their fearless can-do, screw-the-naysayer spirit. “We’re New York,” they tell us, “we’re not going anywhere. We ain’t afraid of no ghosts.”

But the new “Ghostbusters” is pretty scary at times. The ghosts are far more threatening than the fat blobs of goo (and marshmallow) that populate the original. People get attacked, in ways both funny and scary; they are hurled across rooms and injured. And the special effects are top-flight; the long end sequence, in which a host of ghosts take over New York, makes the original look like the work of a high school film club. Even the new film’s reworking of ideas from the original, like explaining how proton beams affect ghosts, is clearer and more fun.

The new film is also very funny, dare I say even more than the original (at least in the key of humor today). McCarthy, Wiig, Jones and her fellow “Saturday Night Live” star Kate McKinnon give specific, richly funny performances, as does Chris Hemsworth in what may be his best cinematic performance so far. At the same time, the characters are each given understated but deep wells of pathos. Wiig’s Dr. Erin Gilbert is someone who has gone through real hardship on her journey to working in this field; so has her longtime best friend, McCarthy’s Dr. Abby Yates. Jones, who in the trailers (as often on “SNL”) seems relegated to the uncomfortable role of “black person who is funny because she is stupid and overreacts to everything,” actually offers a performance of real depth and warmth. Hers is definitely a supporting role, but I honestly could have watched a whole movie built around her character of a friendly M.T.A. employee who has a love for the history and people of New York City.

Even McKinnon’s Dr. Jillian Holtzmann, who is a scene stealer of Murrayian scale, delivering her lines with the crazy relish of Dr. Strangelove, is eventually disclosed to have a whole lot more going on beneath the surface.

And unlike the original, the new “Ghostbusters” is quietly about something—namely the pain of having oneself and one’s experiences discounted or mocked by a society that doesn’t know what to do with them, and the way that we each have the capacity to liberate one another from that exile, if we are willing to reach out and believe.

For what on the surface seems like the wackiest of comedies, it’s pretty potent territory, especially given the political landscape of our world and country today. While the online He-Man Women Hater’s Club may discount the whole idea of a female “Ghostbusters” as an empty, politically correct gesture, it seems to me the kind of story that might speak not only to women but to people of faith and others who know what it’s like to be ostracized because of who they are or what they’ve experienced.

As Jesus said, “The haters we will always have with us.” (I might be slightly paraphrasing.) But so, too, can we find welcome and community, “Ghostbusters 2.0” reminds us, if we are willing to look beyond ourselves and help build one.

Jim McDermott
@PopCulturPriest
Show Comments (
6
)
Comments are automatically closed two weeks after an article's initial publication. See our comments policy for more.
Crystal Watson
6 years 6 months ago
I'm happy whenever I see a post here that stands up for women, so thanks. But I can't help wondering too why sexism in society is (rightly) condemned, but it's accepted in our own church. You quote the awful piece from The Daily Wire, but have you forgotten some of the awful things Pope Francis has said about women? Here's a past article by David Gibson that mentions some of them ... http://www.uscatholic.org/articles/201412/lost-translation-7-reasons-some-women-wince-when-pope-francis-starts-talking-29575
J Scanlon
6 years 6 months ago
Watson I read Gibson and you have a point. I see, however, a nearly 80 year old man likely affected by his own cultural influences. The feminist effort within the Church will advance more when it supports all lives, even those females and males in the womb.
Crystal Watson
6 years 6 months ago
The fact that the pope is a product of a sexist culture is an explanation, but not an excuse. If he and the church were racist, not sexist, the response would be very different. I'm not sure what abortion has to do with the church treating women like people.
Tim O'Leary
6 years 6 months ago
Crystal - I think you should take the Holy Father's terms more lightly, and focus on the meaning of the analogy rather than on the analogy itself. It's seems a rule of feminism that all negative stereotypes of men are fair game and all negative stereotypes of women are unfair. But, I think this hypersensitivity perpetuates a sense of inferiority. Pope Francis uses colorful analogies and exaggerated phraseology in all directions, but particularly on conservative male Catholics and clerics (see his book of insults http://www.bigccatholics.com/2016/01/the-pope-francis-little-book-of-insults.html). I would probably prefer if Pope Francis were a bit more circumspect and careful in his choice of words and didn't ruffle so many sensitive souls. Popes JPII & Benedict XVI would never have used such phraseology but it certainly seems to help Pope Francis get his message out. And, there is noble precedence. Remember Jesus called the poor Scribes and Pharisees a "brood of vipers" and "whited sepulchres." These were the journalists, theologians and priests of his day.
William Rydberg
6 years 6 months ago
What a lamentable squandered lost opportunity for Catholic teaching... The publication of this popular well-financed Hollywood film could have been the opportunity to actually DEFINE what the Ordinary teaching of the Catholic Church is with respect to the secular word "Supernatural" and "Preternatural". A once in a decade opportunity to set the record straight. To, lay out the Church's Apostolic teaching position. Instead we are in my opinion, subjected to more talk that can be found in any secular mag.... Only proving in my opinion, the pitfalls of sending in a not yet fully formed Jesuit in to the Hollywoodland environment. If I were his Superior, for the good of Fr McDermott, I would reassign. Written with anxiety for this young man... America needs a fully seasoned Jesuit, one with prophetic insight combined with great learning. Such individuals exist in the American Order, use them please when dealing with the Hollywood Entertainment Industry.... But that's just my opinion. in Christ,
J Scanlon
6 years 6 months ago
Thr scotosis of the feminist movement in overlooking the humanity of the preborn is a serious flaw to converting others to a their viewpoint. It has made it hard for me, at least. You begin to question their deep commitment to hiuman beings, and worry that it may be an agenda worthy of opposition. It takes hard work to accept what is good with this planck in the eye so obvious.