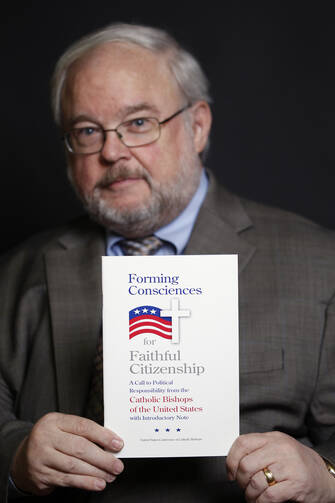 The race is on. Ted Cruz has made his pilgrimage to Liberty University. Hillary Clinton is searching for "everyday Americans" to persuade us she is one of us. Marco Rubio offers himself as the voice of a new generation who can take on a famous front runner and become the first Hispanic president. (Implausible, but not impossible as we learned in 2008.)

Jeb Bush may be a general election candidate without a primary election constituency. Scott Walker uses his victories over unions to claim he can confront liberals in Washington and adversaries around the world. Rick Santorum and Mike Huckabee campaign to save America from moral decline. Carly Fiorina is a Republican woman who says she can defeat a Democratic woman. Governors Jindal and Kasich and other candidates seek their moment to break though.

Martin O'Malley warns against dynasties and looks for an opening. Bernie Sanders suggests America might be ready for a socialist. Jim Webb considers a run from the right and left of Hilary. Washington insiders hope for Bush vs. Clinton, a back to the future strategy to maintain their power and access.

Early predictions are often wrong. However, one trend is likely to continue.  A majority of Catholic voters will support the winner as they have in 10 of the last 11 presidential elections.  E. J. Dionne, Jr. points out “there is no Catholic vote and it is really important.” As the son of a Republican mother and Democratic father, I believe pundits who talk about "the Catholic vote" don't know many Catholics. Faith influences Catholics, but they often vote their economic class and ethnicity, their prejudices and their party affiliation. The most significant differences among Catholics are between those who go to church weekly (57 percent supported Romney) and those who do not (56 percent supported Obama) and between Hispanics (69 percent are or lean Democratic) and other Catholics (53 percent are or lean Republican).

Given the decisiveness and diversity of Catholic voters, a key moment in this election will be Pope Francis’ visit to the United States, especially his address to Congress on September 23. I’ve already offered some thoughts on Pope Francis message and impact.

Another key factor may be the U.S. bishops’ updating of "Forming Consciences for Faithful Citizenship" later in the fall. This statement, issued every four years, has consistently called on Catholics to be informed and principled voters. It is widely used as a moral framework for political choices and sometimes misused to advance partisan agendas. Since 1976, I have helped the U.S. bishops develop their statements and deliver their message. Since I am no longer involved, which is a relief to me and probably others, I offer some challenges for forming consciences of Catholics for the coming elections:

First, while the basic moral framework and outline of key issues have been consistent, the statement needs updating to reflect Pope Francis’ principles and priorities. His leadership does not alter church teaching, bur offers new urgency and emphasis. Francis has warned against obsessing on issues sexual morality and public life, without retreating from the obligation to protect unborn children, vulnerable elderly and family life. His powerful metaphor of a “throwaway culture” offers new context for challenging Americans to defend the lives and dignity of all and care for God’s creation.

Second, bishops have called for Catholics to resist “intrinsic evils’ of abortion, euthanasia, torture and racism. These negative obligations continue in the face of a million abortions a year, advocacy of assisted suicide, debates on torture and stark divisions on racial injustice. "Faithful Citizenship" also clearly insists on affirmative obligations to care for and lift up the poor, to promote family life, to pursue peace and greater justice. In our polarized ecclesial and political environment, some insist the first are matters of "principle" and the second are issues of "prudential judgment." This oversimplified formulation ignores that prudential judgments are necessary in how to resist evil. It also minimizes the compelling moral demands of human dignity, priority for the poor and solidarity and can mis-use "prudential judgment" to justify inaction on immigration and poverty in order to respond to more powerful interests.

Third, bishops should challenge political rhetoric that obsessively focuses on the "forgotten middle class" or "everyday Americans" without moral priority for those at the bottom without hope or opportunity. Catholics should join Pope Francis in looking at economic and political life from the bottom-up and the outside-in, a needed counterpoint to the Washington status-quo.  A political landscape dominated by campaign funders like the Koch Brothers on the right and Emily’s List on the left offers narrow individualism in different forms which leave little room for unborn or poor children or the search for the common good. Poll tested rhetoric may work for politicians, but Christians should offer the soul testing measure of care for “the least of these” as central moral criteria for public life.

Fourth, bishops rightfully focus on growing threats to religious freedom. The killing and persecution of Christians and other religious minorities simply because of their faith demand much greater attention and more effective action.  There are crucial distinctions between important efforts in our country to protect religious ministries from unjustified governmental mandates in the courts and essential action to protect the lives of believers around the world.

Fifth, polling and pastoral experience demonstrate resistance to any perception of partisan advocacy by religious leaders. Bishops cannot come across as apologists for any administration, chaplains for any party, cheerleader for any candidate. They should challenge all of us, whatever our partisan or ideological preferences, to avoid the temptation to adapt our faith to advance our politics.

When Francis addresses Congress and bishops adopt "Faithful Citizenship," they will provide important guidance and a powerful example on how to carry out the pope’s description of the political vocation of Catholics: "Catholics tasked with political life must keep the values of their religion before them, but with a mature conscience and competence to realize them."

John Carr
Show Comments (
1
)
Comments are automatically closed two weeks after an article's initial publication. See our comments policy for more.
Martin Eble
6 years 5 months ago
When we speak of prudential judgments, we also must know who is morally competent to make them. Prudential judgments belong to the moral actor: in the case of the death penalty, the legislature which provides for penalties and the judge and jury who try cases and levy punishments; in the case of war, the chief executive and the legislature; in the case of government dealing with poverty, the legislature. Every Catholic, then, is obliged to certain actions or inactions dealing with intrinsic evils such as abortion, but may disagree on matters of prudential judgment. This is not an “oversimplified formulation” but a fundamental framework of moral analysis and action. Catholics form their consciences from the Church’s teaching, and in their areas of competence make prudential judgments as to their application. As then Joseph Cardinal Ratzinger wrote to Theodore Cardinal McCarrick in 2004:“There may be a legitimate diversity of opinion even among Catholics about waging war and applying the death penalty, but not however with regard to abortion and euthanasia.”The USCCB, with over 300 employees and a budget of approximately $200m, prepares and issues over the signature of one or more bishops a vast number of position papers, analyses, and background material of which only a small fraction is teaching - either drawn from the Church’s existing teaching, or by a 2/3 vote of the entire body of bishops in conference. http://www.usccb.org/issues-and-action/human-life-and-dignity/agriculture-nutrition-rural-issues/upload/joint-letter-to-2013-farm-bill-house-conferees-2013-11-01.pdf On the issues of the poor, family life, peace, immigration and greater justice there is room for a robust debate and differences of opinion between and among Catholics, even with their own bishops. Catholic laypersons have professional experience and competence unmatched by the bishops and USCCB staff in practically every area of American life. In addition no combination of considerations of the poor, family life, peace, and greater justice can ever offset not supporting the banishment of the intrinsic evils of abortion and euthanasia.