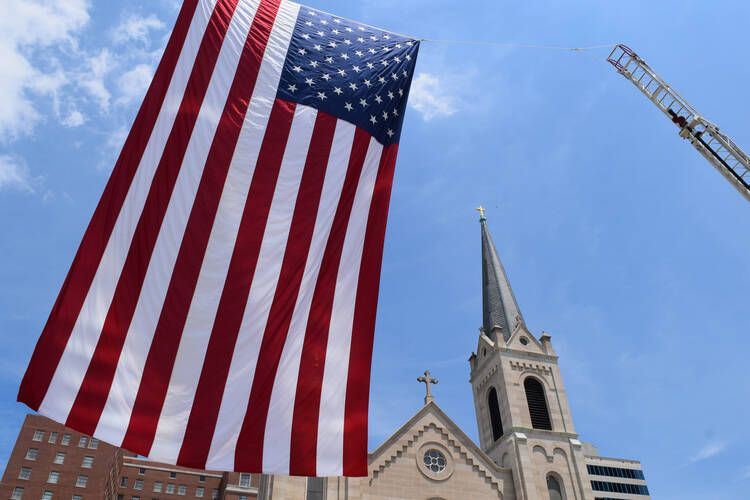 Can existing religious liberty protections exist alongside recently won rights by gay and lesbian Americans? Most of the members of the U.S. Commission on Civil Rights appear to think not.

The commission, a bipartisan body that has for decades made non-binding recommendations to the president and Congress, released a report on Sept. 7 that calls for reining in religious liberty protections in favor of non-discrimination statutes aimed at protecting L.G.B.T. Americans. While that view is not new in the debate over what kinds of protections religious institutions deserve, the tone of some of the commission’s members is raising eyebrows.

“The phrases ‘religious liberty’ and ‘religious freedom’ will stand for nothing except hypocrisy so long as they remain code words for discrimination, intolerance, racism, sexism, homophobia, Islamophobia, Christian supremacy or any form of intolerance,” the chairman of the commission, Martin R. Castro, wrote in the report.

“Religious liberty was never intended to give one religion dominion over other religions, or a veto power over the civil rights and civil liberties of others,” he continued. “However, today, as in the past, religion is being used as both a weapon and a shield by those seeking to deny others equality.”

The Catholic Church’s point man on religious liberty issues took exception with Castro’s remarks. Archbishop William Lori of Baltimore, who chairs the U.S. Conference of Catholic Bishops’ subcommittee on religious liberty, called them “shocking” and “reckless.” He warned that the church’s vast social services network could cease to exist if conscience protections are tossed aside.

“Catholic social service workers, volunteers and pastors don’t count the cost in financial terms or even in personal safety. But, we must count the cost to our own faith and morality,” he said.

“We do not seek to impose our morality on anyone, but neither can we sacrifice it in our own lives and work,” he continued. “The vast majority of those who speak up for religious liberty are merely asking for the freedom to serve others as our faith asks of us.”

The report, “Peaceful Coexistence: Reconciling Nondiscrimination Principles with Civil Liberties,” says that civil rights conflicts arise among religious institutions that “choose leaders, members or employees according to the tenets of their faith, even if the choice would violate employment, disability, or other laws.”

The Catholic Church has not been immune to such conflicts. A number of employees have been fired from Catholic institutions or had job offers rescinded in recent years after it was revealed they had married same-sex partners. Church officials say that they cannot have individuals who openly violate church teaching on marriage in certain roles, including working as teachers or music ministers. Critics contend that those roles are not ministerial in nature therefore current non-discrimination laws should prevail.

Beyond the scorching critique of religious liberty initiatives, a majority of the civil rights commissioners also recommended in the report that federal and state governments take steps to curb the power of the Religious Freedom Restoration Act, a law that allows individuals and institutions to claim exemption to some laws if they feel they infringe on their religious liberty.

Passed by Congress with broad bipartisan support in 1993, the law was replicated in several states soon after. It has been used to protect a range of causes, from the use of peyote in religious services to upholding the right of church organizations to give food to homeless people in public parks.

Richard Garnett, a professor at the University of Notre Dame Law School, told America that he finds the report’s findings politically motivated and questioned its recommendations.

“The biggest takeaway is that the commission says that anti-discrimination statutes enjoy a primacy of place over religious freedom protections,” he said. “It’s quite striking because as a matter of American constitutional law that's not true.”

He said most R.F.R.A. cases aren’t “9,000 degree culture war issues” but suspects that the commissioners are trying to anticipate future battles over health care, such as religiously-affiliated hospitals that do not wish to perform gender-reassignment surgery, for instance.

In recent years, a handful of cases involving vendors who say their religious beliefs prevent them from providing services to same-sex marriage ceremonies has shifted the debate about religious accommodations into the realm of the culture wars.

In response, some states have passed laws that would protect such objections, often with the support of Catholic leaders. Three of the commissioners called such laws “thinly-veiled attempts to turn back the clock.”

“The First Amendment is a shield that ensures a diversity of religious views are allowed to flourish in the U.S.,” wrote another commissioner, Karen K. Narasaki. “However, there are some seeking to make the right to exercise their religion a sword that can be used against others who do not conform with their interpretation of their faith.”

While the majority of commissioners supported the report’s findings, others dissented.

Peter Kirsanow accused the chairman of the commission of “singling out of Christianity” and the commission generally of trying to silence religious voices in the public square.

“The 20th century had no shortage of those who believed that they were ushering in a new and better age, and that ushering in that age was worth silencing unpopular beliefs and squelching unpopular views,” he said. “Such thought conformity may seem comfortable and enlightened when, during any given moment in the arc of history, the regnant thoughts, beliefs, and values are consistent with one’s own,” he continued.

“But when the prevailing thoughts and beliefs shift, as they inevitably do, such conformity can prove disastrous.”

Archbishop Lori, for his part, challenged Castro and the commissioners to respect religious voices in a pluralistic society.

“We respect those who disagree with what we teach. Can they respect us?” he asked.

“People of faith are a source of American strength,” he continued. “An inclusive and religiously diverse society should make room for them.”