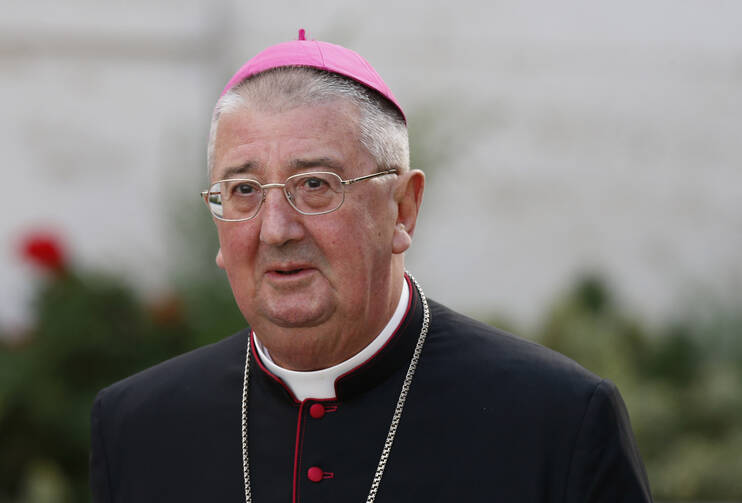 In the tumultuous and often bewildering news cycle of 2016, the Archbishop of Dublin taking to the national airwaves to address “Grindr, which is a gay dating site,” still managed to jolt the listening public in Ireland.

Archbishop Diarmuid Martin was clarifying why he recently decided to withdraw three seminarians from St. Patrick’s College, Maynooth, because of “strange goings-on.” Archbishop Martin told listeners that Ireland’s national seminary had a “gay culture” and that “people are sexually active in the seminary. People are on an app or website called Grindr.”

Archbishop Martin expressed concern that investigations into sexual harassment and other misconduct were carried out by the college council rather than independent investigators. He added that a culture of  "quarrelsome" anonymous accusations and "poisonous" anonymous letters was creating an unhealthy atmosphere for seminarians.

The archbishop’s intervention lent credibility to long-standing rumors surrounding the college. One former seminarian last week testified to its so-called gay culture, one that was widely known about but not addressed. Another former seminarian claims he was expelled from the college after he failed to report two colleagues for engaging in sexual activity. The reports revealed a deep disconnect between church authorities and the experience of some seminarians, along with the challenges the Irish church is struggling to address: homosexuality as a reality in the church, celibacy, accusations and secrecy and a formation process that is quickly becoming antiquated.

There is divided opinion on whether Archbishop Martin was right to publicly express no confidence in Maynooth and choose instead to send his seminarians to the Irish College in Rome. The Rev. Jason Murphy, who was a seminarian in Maynooth until 2000 and is now based in Co. Cavan, said Archbishop Martin’s decision appeared to be part of an agenda, one that would ultimately not serve his diocese. “Is he going to wrap his three seminarians up in cotton wool, send them off to Rome and then expect them to come back and work in Dublin, with all of its problems and challenges? They have to be in tune with the people they serve.”

Dublin is indeed facing challenges, as is the Dublin diocese itself. One glaring fact is that Archbishop Martin has just three seminarians training to serve the needs of over one million Catholics in nearly 100 parishes. A recent report from the consulting firm Willis Towers Watson showed that mass attendance in some working class areas of Dublin has fallen to 3 percent, while the average in Ireland is around 14 percent. The fact that Ireland has lagged far behind in its recruitment of young men was also highlighted, with more than three quarters of priests expected to be over 60 years old by 2030. The summary of the report also found a “need to develop solutions to deal with the issues raised,” adding that the status quo was “unlikely to be sustainable.”

Archbishop Martin is among the most respected senior church leaders in Ireland, not least because of his response to clerical sexual abuse. He was central to implementing child protection policy and has been a consistent and passionate advocate for victims of abuse. In 2007 he publicly clashed with his predecessor, Cardinal Desmond Connell, who went to the High Court to prevent Archbishop Martin from handing over thousands of church files to authorities.

The cardinal later dropped the case, but it served as a very public example of how Archbishop Martin was not afraid to set himself apart. In the current controversy, he drew a connection to the culture that allowed child sexual abuse to exist. “One of the things that I constantly recall in the child sexual abuse...is on how many occasions something happened and then somebody said ‘well everybody knew there was something wrong there’ and nobody came forward. I think that Maynooth has to come forward and show that it has its house in order and that the procedures there are robust, and that the robust procedures are accessible and that they are being used.”

His reasons for moving his seminarians go far beyond the sexual activity and anonymous accusations. Pope Benedict’s Apostolic Visitation to Ireland, led by Cardinal Timothy Dolan in response to the Irish government’s Ryan and Murphy reports on the sex abuse scandal, resulted in greater separation between the seminarians and lay students in Maynooth, with barriers erected and separate eating quarters introduced.

It created a more isolated formation process for seminarians, one that has been criticized for being at odds with Pope Francis’ vision for a more inclusive, open and integrated church. It has also been suggested that the controversy around Maynooth is serving as a proxy war between battling ideologies within the church. Father Brian D’Arcy, a well known commentator in Irish progressive circles, told The Sunday Business Post that many of those being sent for training are deeply traditional and pious candidates who “get through the seminary system very easily because they don’t cause trouble and are highly orthodox.” He cautioned that these seminarians are not suited to an ever-changing Ireland. Indeed, it was claimed that six seminarians were held back from ordination and told to take time out last year because they were “too theologically rigid.”

The report from the Apostolic Visitation to Ireland was never published, so it is unclear how church authorities propose to address Maynooth’s future. Archbishop Martin’s decision to spare his seminarians from the Maynooth experience was the equivalent of "moving the deck chairs on the Titanic," according to Father Brendan Hoban of the reform-minded Association of Catholic Priests. Father Paul Dempsey, who is based in the diocese of Kildare, says the spotlight on Maynooth has presented a real opportunity for the church “to become more imaginative about the formation process. One option would be an apprenticeship model, where seminarians still study in Maynooth but are also out in the community ministering alongside more experienced priests.”

Father Dempsey’s views are similar to Archbishop Martin’s, who said that he plans to set up a new priest training system in Dublin that would allow seminarians to have closer contact with parishes. Seminarians would live in small communities while travelling the short distance to Maynooth for their studies, providing a more integrated training experience. But for now, this remains an ambition, and his three seminarians will go to Rome. Whether this was a bold move toward modernity and openness or a public slight that damaged the Irish church and those in it, depends very much on where you’re standing.

Rhona Tarrant
@RhonaTarrant
Show Comments (
5
)
Comments are automatically closed two weeks after an article's initial publication. See our comments policy for more.
William Rydberg
5 years 9 months ago
Ireland-Some working class areas of Dublin, having less than 3% attendance... One wonders what was being done when the figure started to approach 53% not too long ago. Seems that in most reputable polls, +\- 3% is the margin of error....
L J
5 years 9 months ago
The prelate should be welcoming the gay app if these seminarians are using it. Given the Church's teachings on celibacy for priests, he should visit these men, embrace them and dismiss them. If they are trolling apps for sexual intimacy, they will never survive the life of a priest, truly a thankless job. He should welcome these men as lay members in the Church, explain how they are using the priesthood to suppress their true inclinations and follow the Lord in whatever calling He has chosen for them - outside the priesthood. It is just a matter of having a father-son conversation and telling them they clearly are lacking the charism to be a priest. This news item should not be an occasion for stigmatizing others. Grindr is a blessing for this and other seminaries. Let is be used as a screening method for vocations. If these men need to be satisfying these urges, let them do it outside of the priestly calling and seek their vocation elsewhere. This is truly a non-story, but one sadly this prelate is once again causing scandal to others: celibacy is a gift, and few of us have it in and out of the ordained life. Can we discuss instead more important sins like Pride, Greed, Wrath and Gluttony, all of which are killing our members? Raymond Burke, are you listening?
Reyanna Rice
5 years 9 months ago
Each article I have read on this situation leaves me feeling that the full story is yet to come out and when it does it won't be a happy one to read.
Tim O'Leary
5 years 9 months ago
It seems there is something truly rotten to the core at Maynooth, in that six orthodox seminarians (described above as "too theologically rigid") were deemed unsuitable, and the reports of sexual coercion and seduction and discrimination of heterosexuals. Then there is the mainstreaming of gay pornography, in the society and in the seminary. And, now this - an Archbishop on the liberal side of the orthodox theological spectrum can't even trust the institution. As to a gay culture (Pope Francis calls it a gay lobby) in the seminary, this is completely unacceptable for orthodox Christianity. I suggest the following steps 1) close down the seminary for 20 years (the secular University could stay open) 2) move the few vocations the Irish people can muster elsewhere, to Rome or to England (which is experiencing a vocational revival) or the US. 3) man the Irish parishes with missionaries from Africa and elsewhere (reverse missions) for the next decade 4) plan on the Irish seminarians returning when they are mature (in their 30s and 40s)
Michael Barberi
5 years 9 months ago
There is a much larger issue here. First, the Trustees of Maynooth, most or all of them are bishops, should move quickly to have all charges investigated thoroughly by an outside independent commission. The fact that there is a disagreement between the Archbishop of Dublin and the Maynooth Trustee bishops points to a broken hierarchy who cannot solve its own problems. When such a division is allowed to fester, it widens the chasm of credibility that exists between the laity and hierarchy and between bishops. The other issue reported is that only 3% of Catholics in Ireland attend weekly Mass. If this is true, Is the hierarchy overwhelmed by an inability to adequately deal with a secular culture influencing Irish Catholics or is part of the problem the Church's own internal culture? Rather than close Maynooth, the Irish hierarchy should fix the problem. At the moment, there does not seem to be any interest in doing either.