'Every Person Is a Gift From God,' Archbishop Edoardo Menichelli; Ancona-Osimo, Italy

'Every Person Is a Gift From God,' Archbishop Edoardo Menichelli; Ancona-Osimo, Italy 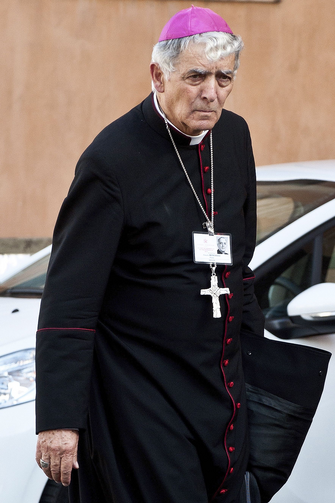 Archbishop Edoardo Menichelli, 75, hails from the archdiocese of Ancona-Osimo, a Central Italian land of rolling hills, vineyards and sandy beaches on the Adriatic Sea. Ancona is a main port on the Adriatic, particularly for passenger vessels, and the economic center of the region.

A priest nearly 50 years, Archbishop Menichelli spent 23 years working inside the Apostolic Signatura, the Catholic Church’s main judicial court, and another two as the secretary for the Congregation of Oriental Churches. Yet what’s most noted about the Archbishop, both from those years and in his 20 years since as a bishop (ten going on eleven in Ancona-Osimo) is his constant connection with the pastoral and the people.  He is well regarded as a preacher, has promoted pilgrimages and Corpus Christi processions, and has been repeatedly chosen to do catechesis at World Youth Days for the Italian bishops. In 2011 he held a Eucharistic Congress in Ancona; hundreds of thousands of people came. Italian newspaper Il Messangero called him “the soul” of the event.

In 2013 Menichelli preached that “The first thing is to recover simplicity... Is my episcopacy more valid if I wear a gold ring? Is it worth more if I wear a gem-encrusted cross? Or would it no longer be of service to people?” He himself has long been known for his own simple lifestyle, and the tiny ancient Fiat Panda that he drives to visit the 206,00 plus Catholics of his archdiocese. At Christmas Mass this year he pondered the loss of tenderness in society, and reminded his listeners that kindness and affection are part of our vocation as Christians: “with tenderness we do not turn a blind eye to human ugliness.”

His episcopal motto is “Sub Lumine Matris”—“Beneath the Mother’s Light.”

How do you feel about being named cardinal? How has your family reacted?
I was writing the homily for the next Mass and I heard noise from the outside, like children screaming. There were no children, the noise came from the nuns that work at my house, they had received the news Pope Francis made me a cardinal and they came to tell me, shouting: “The Pope named you a cardinal!” “Really?” I was very surprised. Then I told them: “Okay! Now you better go and cook lunch!”

Last October I proposed my resignation to Francis, as I had reached 75, but he didn’t accept it. I wanted to not be tied to a place anymore, maybe work in other areas, but it seemed that wasn’t God’s will.

My family, they are happy. I received a lot from them; my mother taught me a lot about life. Once, when I was a child, I had a fight with a classmate. “If you don’t say sorry to him you won’t have dinner!” she told me. When I went to see my classmate and I apologized to him, she told me she was proud of me.

What do you hope for the church today?
Concerning the clergy, I’d like to see more humble pastors. Concerning families, I know that to be married and grow a family is not easy. This is their “priesthood” or another kind of priesthood, their own vocation.

I’d like a church immersed in history, expert about humanity. A church like a mother, welcoming and forgiving, that doesn’t want to proselytize but to evangelize, by telling people the beauty of God in a credible and fresh way.

What is one message you feel the church should be offering to today’s world?
The church has to communicate in a strong and honest way, in order to build the common good, to serve the truth and to be committed to her educational mission.

What are the most pressing issues facing your region and community?
I’d say unemployment, the difficulty to find good jobs and the growing presence of migrants. Migrants from poor countries are growing in number every day. They need help and they need to be listened to.

In addition, in this era of fast communication, I’d like [to see] reporters and media free to express their opinions in a constructive way. They don’t have to be tied to any kind of power, whether economic, political or clerical. We need the right secularism (in Italian “laicità”), something that considers the human person as the center, no matter her own political or religious belief. In this perspective, Jesus was the most “secularized” man, a man who was ready to accept and welcome everyone, and the Gospel is the best way to implement this kind of secularism.

I hope the media, the social media, and all the people involved in this kind of work can help build a community, not only hand over information. In fact, nobody owns the truth.

What has your region and your community taught you about God and the church?
This land is filled with hardworking people who try to be welcoming and sharing of their own goods. There is an economic revolution going on, with jobs not held for life anymore, and they know that everybody has to be open to the changes. For this reason the only possible answer is to avoid excesses and to embrace solidarity.

With foreigners coming to Europe from everywhere, we need to overcome discriminations. We are all brothers, we have one Father. Races and colors are visible to our eyes, but to be human is something invisible, and this is what we have to find in one another, like a family.

What’s an image of God, passage from Scripture or figure from church history that you look to for support and encouragement?
In this land the Virgin Mary has a special veneration. And this has helped me a lot. She was working everyday and she shared her life with very humble people.

Finally: What are your hopes for next October’s Synod?
Every person is a gift from God, no matter their sexual inclinations. Heterosexuals, gays, everybody has a lot to offer. We have to rediscover this in the Gospel and in our everyday mission.