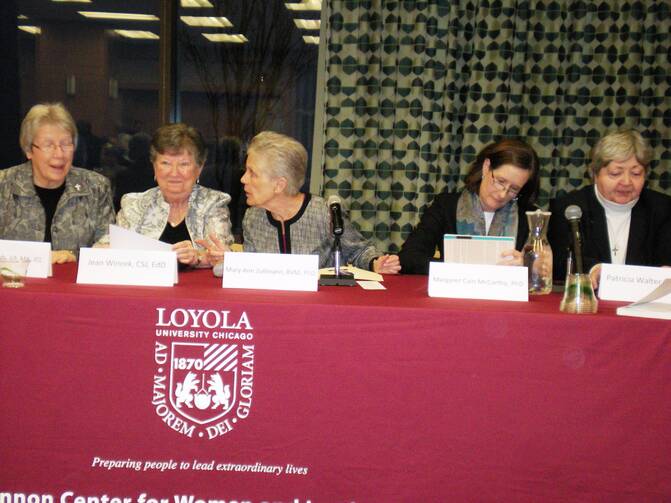 A process that many women’s religious congregations once viewed as hurtful and intrusive has turned into a tale of transformation for the country’s nearly 59,000 religious sisters.

That is how several sisters in leadership positions now describe the Vatican’s “apostolic visitation,” an unprecedented inquiry into the lives and ministries of American nuns.

Rome is set to release its findings on Dec. 16—nearly six years after first announcing a comprehensive examination of “the quality of life of women religious.”

“In the end, grace did prevail,” says Sister Mary Ann Zollmann, a former president of both the Sisters of Charity of the Blessed Virgin Mary and the Leadership Conference of Women Religious, which represents about 85 percent of American sisters.

Zollmann says the visitation underscored the “integrity, creativity and resilience” of American sisters. “You see the power of the communal sisterhood that emerged as a result of going through this together.… Unwittingly, Rome gave us back to ourselves and to one another.” Zollmann told a packed room at the Gannon Center for Women and Leadership at Chicago’s Loyola University last week.

Zollmann is a co-author of a new book called Power ofSisterhood: Women Religious Tell the Story of the Apostolic Visitation. The book includes essays by eight sisters who were in leadership positions within their congregations during the time of the visitation. It also presents original research by Margaret Cain McCarthy, a professor at Canisius College in New York. McCarthy surveyed 143 superiors whose communities received visits from the Vatican inquirers. About 400 communities in all were visited by Vatican representatives.

Sisterhood is an attempt to tell the story of the visitation from the inside out, and will likely provide a significant counterpoint to the Vatican’s report.

The authors say it was important for the sisters to relate their own experience. “We wanted for women religious who come after us to see how together we negotiated a significant moment in religious life,” Zollmann says.

News of the Vatican inquiry provoked widespread anger and shock when it was announced in January 2009. Initially, communities were given only a broad explanation for the inquiry from the office overseeing the visitation, the Vatican Congregation for Institutes of Consecrated Life.

The purpose was refined to include an examination of the decline in the number of women entering religious life. Cardinal Franc Rode, who headed the Congregation for Institutes when the visitation was announced, later said he feared a “radical feminism” had infiltrated certain women’s congregations. Some church officials complained certain sisters were deviating from official church teaching by supporting gay rights, women’s ordination and President Obama’s health care reform, which included insurance coverage for contraception.

Almost immediately, news of the Vatican inquiry met with sharp criticism from members of the laity, many of whom viewed the visitation as an assault on the integrity of those sisters who help run parishes, work in hospices, minister to prisoners, serve the homeless and teach in some of the most underserved inner city neighborhoods.

Sister Jean Wincek, one of the co-authors of Sisterhood and a member of the leadership team of the Sisters of St. Joseph of Carondelet, says it was a pivotal moment when the laity “came forth and spoke so clearly about their commitment to our mission.”

The sisters eventually decided not to ignore or even combat the Vatican inquiry, but merely speak out about their lives. They began to see the visitation, Zollmann says, as an opportunity to “say who we are, why we are and how we want to be going forward.”

McCarthy, the Canisius College educator, collated some 2,500 responses from women religious for the book. She says about 86 percent describe their initial reaction to the visitation as a combination of anger, disappointment, resentment, shock, sadness and stress.

“They began in a very negative place,” McCarthy says. “By the end [of the process], there was this sudden outpouring of the Spirit.” Feelings of anger and resentment changed into a “sense of community, of togetherness, of wholeness.”

About half the sisters surveyed say they now view the visitation in a more positive light. Many cited the cordiality of the representatives who conducted the on-site visits of religious communities. Some had kind words for Mother Mary Clare Millea, the Rome-based superior of the Apostles of the Sacred Heart of Jesus, whom the Vatican appointed to conduct the inquiry.

“It was very clear to me this had been a transformational experience for the sisters,” McCarthy says.

The co-authors of Sisterhood say the Vatican report will be somewhat anti-climactic. They maintain it will have little effect on how they move forward. But they agree its release provides for a moment of closure.

“I know there are those who had hoped this thing would die a natural death,” Zollmann says. “But to have no word said about an event that occupied and tore open the very heart of my life for four years, to me, would be in some ways another act of oppression.”

Wincek says the report will do little to change the main mission of American sisters, which she describes as serving those who live on the margins of society. “Women religious in the 21st century are strong,” Wincek says. “We work on the margins of the church so that the voice of those who have traditionally not had a voice can be heard.”

The visitation may have begun by examining the decline in vocations to women’s religious orders, Zollmann says. “But in the end, this isn’t a story about diminishment. It’s about expansion and abundance.… There is no way for offices in Rome to understand the renewed energy vitality this experience has instilled in us.”

Update: In this special podcast Judith Valente talks with Sister Mary Ann Zollmann, Sister Jean Wincek and Margaret Cain McCarthy about the visitation and the future of religious life int he United States.