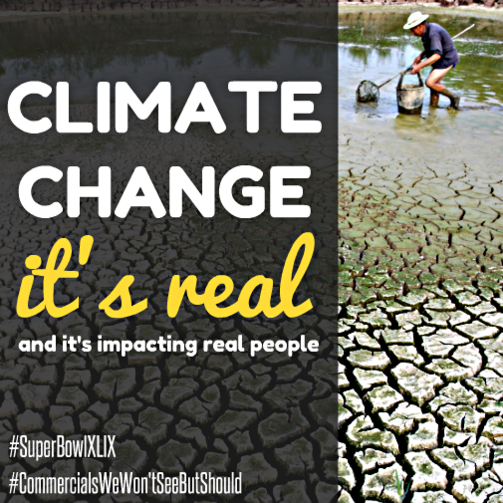 A few hours before the Super Bowl I happened upon some tweets from the Ignatian Solidarity Network, opining over the kinds of advertisements they wish we’d see during the game – ads about how climate change is real, or the need for comprehensive immigration reform. They even did some mock-ups (see right).

But we all know advertising on Super Bowl Sunday is not about “raising awareness,” it’s about consumption. I settled in for an evening of beer, cars and M&Ms, thank you very much.

Then early in the first half of the game a McDonald's ad revealed that for the next two weeks they’re going to ask random customers to pay not with cash but with acts of “Lovin’”—like calling your mother to tell her you love her; telling your children what it is that you love about them; or having to spontaneously dance.

Lest you think I am making this up, here is the ad:

Now, this wasn’t exactly what the Solidarity Network had in mind, but still, it amounted to one of the world’s biggest companies making an effort to try and help people be a little bit more in touch with the things that matter. Might as well set the ad to the St. Louis Jesuits—“Let us build the City of God.”

But it begged other questions. How would I feel if a stranger made me dance to get my lunch? Or forced me to make a phone call while people in line waited to order their Happy Meals? Also, if McDonald's wants to take a step towards building the Kingdom, how about pay their employees a living wage? Why not start with that?

Maybe two commercial breaks later, there was another ad, this time from Nationwide Insurance. I’ve posted it below, but if you’re a parent, you might want to jump ahead and read what the ad’s about first. Because you may find it disturbing.

That’s right. In the middle of the Super Bowl, without any set up or warning, families were suddenly faced with the prospect of their children dying.

Here’s what Twitter had to say: “Nationwide: While enjoying this game, consider the possibility that your small child might die horribly.”

“Dear Nationwide, is terrorizing my kid during the Super Bowl covered under your plan? If so, I’ve got a claim to file.”

“Hey, #Nationwide, take your writing staff to McDonalds this month.”

“Might as well change your jingle to the Jaws theme.”

Now, as it turns out Nationwide has been fighting to decrease the number of preventable childhood deaths for over 50 years. And the ad was to promote their safety website, Make Safe Happen (which by the way has a lot of good tips).

Still, as someone whose immediate family has known the tragedy of a child’s death, it was unnerving. I spent the next 20 minutes uneasy about whether I was going to have to watch some other unexpected version of that again, and worried whether other family members had seen it, and how it might have affected them.

The NFL then debuted this anti-domestic abuse ad.

Again, a powerful, well written piece of work, and also one presented without forewarning.  By halftime some were describing Super Bowl XLIX as “Downerbowl,” “The Traumabowl” and “The Super Bowl of depressing commercials.”

Some will undoubtedly walk away from all this saying the whole idea of trying to raise social consciousness during the Super Bowl is ridiculous. We’re talking about an event that featured a cheating quarterback who still gets to play and a halftime show with dancing beach balls, for God’s sake. (As someone tweeted, “I bet that beach ball graduated from Julliard.”) No one’s interested in thinking here.

But I go back to those tweets from the Ignatian Solidarity network (which can all be seen here). Just a few words and a simple image. And it was enough.

Maybe that’s the real point to be made, not don’t do these kinds of ads but have some presence of mind about them. When it comes to these issues we don’t need a clever hook or a stunning Sixth-Sense reversal. The issues speak for themselves. So keep it simple, and let them.

Show Comments (
3
)
Comments are automatically closed two weeks after an article's initial publication. See our comments policy for more.
James Broatch
5 years 1 month ago
It would have been much more loving if McDonalds had created a commercial which announced that they were paying their workers a living wage
John Walton
5 years 1 month ago
The commercials were saccharine beyond belief. Corporate sponsors should follow the advice from Henry VI, Part II and render unto the consultants what was promised to the lawyers.
Robert Koch
5 years 1 month ago
No one is forcing people to work for Mc Donald's. They personally chose to do so.
Advertisement