Differences Emerge Immediately at the Synod on the Family 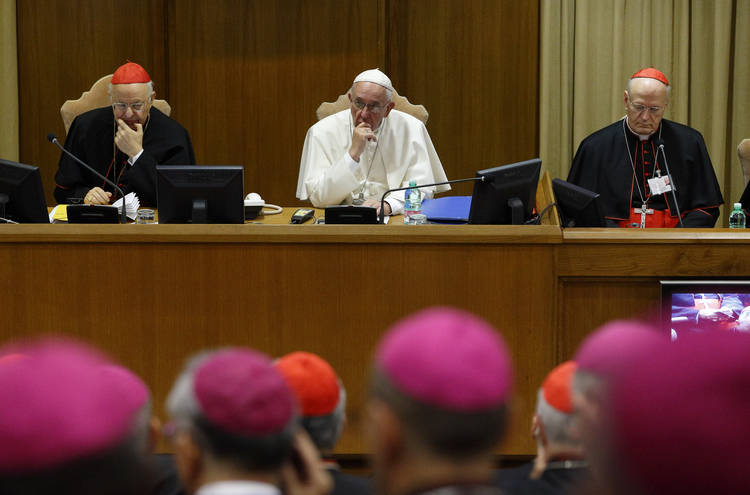 The Hungarian cardinal, Peter Erdo, is playing a crucial role in the synod on the family, and now a somewhat controversial one, since the keynote paper he presented to the plenary session of the synod on the opening day contained more rigid, traditional positions on some of the hot button issues than those presented in the synod’s Working Document (WD, or ‘Instrumentum Laboris’) that was published just three months ago.

His keynote presentation on the morning of the first day of the synod has given rise to the charge by several synod fathers that by using a deductive methodology Cardinal Erdo is drawing conclusions from already decided church doctrine and thereby closing the debate even before it has begun in the hall, whereas Pope Francis, the Working Document and many others are using the inductive methodology (the methodology of "the signs of the times"of the Second Vatican Council) starting from the real life situations of people, an approach that opens new horizons. For the most part, the charge against Erdo has been expressed in private so far, though I’m told it's shared by many participants, and also emerged in public in a few strong exchanges at the one hour period of “open discussion” on the first evening of the synod, in the presence of the pope.

Sources present in the synod (who asked not to be identified) told me that one of the questions many fathers are now asking is this: Are the 13 linguistic groups (that begin their important work on Tuesday afternoon, Oct. 6) expected to take the synod’s WD as their basic text for discussion, or is this in some way being replaced by Erdo’s report?

As General Rapporteur (or Relator), Cardinal Erdo’s task is to give general direction to the synod’s discussions by summarizing the input that has been received and identifying the main issues that need to be addressed. He had the same role in the 2014 synod.

On the first morning of this three-week synod (Oct. 4-25) on “The Vocation and Mission of the Family in the Church and in the Contemporary World,” however, Erdo surprised many bishops and observers by his keynote address, in which he sought to close doors on a number of questions that were expected to be at the center of a lively discussion during this assembly. Among them, the question whether divorced and civilly remarried Catholics might be readmitted to Communion and, if so, under what conditions, and – secondly – whether the church should adopt a different, more welcoming, respectful approach to homosexuality and same-sex relations than has been the case up to now.

In his 15-page presentation, the 63-year-old canon lawyer and former president of the Council of the European Bishops Conferences took a more rigid position and different tone on these and some other issues than did the synod’s Working Document, that was approved by the pope and published on June 23.

For instance, he devoted one and a half pages to the question of Catholics those who are “in problematic matrimonial or family situations.” Referring to those who are “divorced and civilly remarried,” he affirmed that “a pastoral, merciful accompaniment is obligatory,” but insisted that “this must leave no doubt about the truth of the indissolubility of marriage taught by Jesus Christ himself.”

He emphasized that “the mercy of God offers pardon to the sinner, but requires conversion.” He explained that “the sin that one is dealing with in this case is not mainly about the behavior that could have provoked the divorce in the first marriage” and therefore “it’s not the shipwreck of the first marriage, but the living together in the second relationship that blocks the access to the Eucharist.”

Cardinal Erdo quoted one part of WD (No. 121) where it states, “Many parties request that the attention to and the accompaniment of persons who are divorced and civilly remarried take into account the diversity of situations and be geared towards a greater integration of them into the life of the Christian community.” He chose not to cite the rest of the paragraph that developed this concept of integration but instead affirmed that the impediment to “some aspects of the integration” is to be found in “an intrinsic demand in various situations and relations, in the context of ecclesial witness.”

As for the “penitential way” through which divorced and remarried Catholics might be able to receive Communion (as suggested by Cardinal Kasper and mentioned in WD Nos. 122 and 123), Erdo stated that this is only possible in accordance with No. 84 of the Apostolic Exhortation “Familiaris Consortio” (which John Paul II issued after the 1980 synod on the family), which envisages that divorced and remarried Catholics who are living together may be admitted to Communion if they “practice continence through the strength of (God’s) grace.” In other words, they must renounce sexual relations, and their situation must not cause “scandal.”

He asserted that “the integration of the divorced and remarried into the life of the ecclesial community can take many forms” but this “is different from admission to the Eucharist.”

He insisted that “in the search for pastoral solutions” to the difficulties of some divorced and remarried persons. “It should always be kept in mind that fidelity to the indissolubility of marriage cannot be joined to the practical recognition of the goodness of concrete situations that are opposed to this, and therefore irreconcilable (with it).” Putting it even more strongly, he added: “Between truth and falsehood, between good and bad, there is no ‘graduality.’ Between the true and the false, between good and evil, there is in fact no graduality, even if some forms of living together carry in themselves some positive aspects, this does not imply that they can be presented as good.”

When questioned by reporters at the crowded Vatican press briefing as to why he has taken a more rigid position than that which appears in the synod’s Working Document published just over three months ago, the Hungarian cardinal justified his stronger, less open, stance as “objective and mathematical,” citing significant “additional input” from bishops and other not well identified sources that he said had come down strongly in favor of the traditional stance.

As the synod enters its second day (Oct. 6), the question about the different methodologies and whether the WD remains the basic text for discussion in the language groups is expected to resurface, and while this second issue may be resolved before sunset, the debate over methodology is unlikely to disappear so quickly.

Gerard O’Connell
@gerryorome
Show Comments (
2
)
Comments are automatically closed two weeks after an article's initial publication. See our comments policy for more.
Tim O'Leary
5 years 6 months ago
This seems a decidedly biased report. To use the word rigid three times, when Cardinal Erdo was just expressing Catholic teaching as it is. Instead of rigid, perhaps, orthodox would be a more accurate word. A good distinction was made by Canadian Archbishop Durocher today between fidelity to the teaching (what Erdo expressed) and dialogue with those who do not accept the teaching (Catholics and non-Catholics), and he indicated some Cardinals emphasized the doctrinal/disciplinary teaching and others the dialogue. Both are of course important to any true and effective evangelisation, the key being that dialogue cannot depart from the teaching.
Henry George
5 years 6 months ago
Not sure if an absolute distinction can be made between Deduced Truths and Induced Truths. Presumably God's Truths are neither. As for "Signs of the Times" - I think that had more to do with how to express the teachings of the Church to the Modern World rather than conforming the Church of Christ Jesus to the transitory 'truths' of this world.