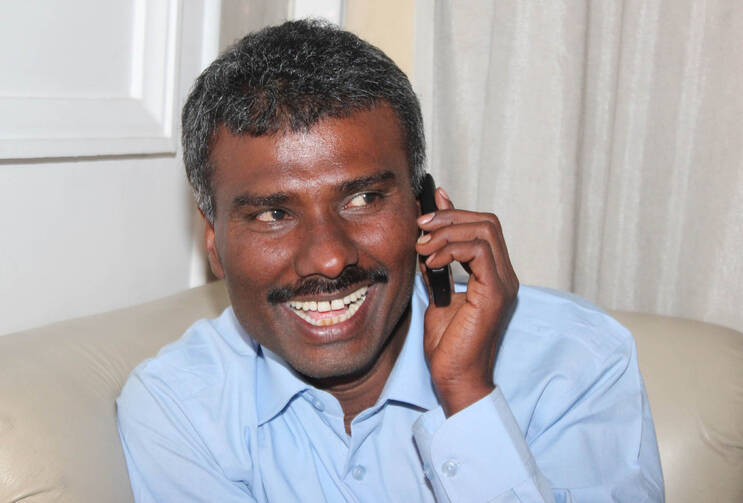 After almost nine months in captivity in Afghanistan, Jesuit Father Alexis Prem Kumar has been released and is back home with his family in India.

International Director Peter Balleis, S.J., said, J.R.S. staff in Afghanistan and around the world were elated to have Father Kumar home. “He’s in good spirit, physically well; he lost a lot of weight during [his captivity]; we are happy to have him back,” Father Balleis said. He added that as international director a "great weight has been lifted off my shoulders." Describing Father Kumar's months of captivity, Father Balleis said the Indian Jesuit had not been mistreated by his captors, who frequently told him they intended to release him. “He had in the morning time to pray, which was very important to him," Father Balleis said. "Trusting that J.R.S. will look for him and will do what is necessary to get him back,” Father Balleis said, “that kept him going.”

Father Kumar will be taking some time off to recover from his ordeal at his Jesuit community in India. Father Balleis said that the Jesuits would provide Father Kumar with whatever counseling he might need after such a lengthy captivity.

In India on Feb. 26, Father Kumar told reporters that he was released with a warning by his captors, presumed to be members of the Afghanistan Taliban: “I was told that I will be shot if I chose to come back to Afghanistan.”

Father Kumar said while a hostage his abductors never threatened to kill him, but did keep him in chains most of the time and he was never left without an armed guard. He was moved around frequently, typically every eight days; his longest stay in one place was 81 days.

According to Father Balleis, the first eight days after his kidnapping at a J.R.S. school near Herat in western Afghanistan in June 2014 were perhaps the hardest on Father Kumar. He was kept in handcuffs and shackles in a cave during this period.

Why Father Kumar was taken in the first place may never be clear, said Father Balleis, nor could he speculate on the conditions of his release. “Normally most of the people are taken for ransom or for the exchange of political prisoners,” he said, adding, “we don’t know what the negotiations were with the Indian government.”

Asked by reporters in New Delhi how his release was secured, Kumar said, "I don't know the purpose for which I was abducted [nor] how I was released."

Father Balleis said prior to Father Kumar’s abduction, Indian Jesuits had worked in Afghanistan for years without being targeted by Taliban or criminal gangs active in the region, and a degree of complacency may have set in regarding the inherent risks of working in such a troubled region. Ironically Father Kumar had been attempting to leave Afghanistan because of an alert that suggested that security situation had changed for Indian citizens. His flight out canceled, he had returned to the school “without people realizing it.” At that time, Father Balleis believes an “informer” at the school contacted kidnappers and alerted them to Father Kumar’s presence.

Though there was a brief interruption of J.R.S. programs in Afghanistan in the immediate aftermath of Father Kumar’s abduction, the agency restarted those efforts quickly, and the kidnapping has not led to any diminishment to J.R.S. activities in Afghanistan or other conflict zones like Syria and Iraq where J.R.S. operates. Father Balleis said J.R.S. did begin a review of its security protocols, however, partly because of Father Kumar’s ordeal.

“Our security concern and preparedness has come to another level,” he said. “We are running now in all regions where it is risky security training for our teams because a few things you can avoid and save lives. They’re sometimes very simple mistakes [that can put humanitarian workers at risk] and that we can really improve.”

J.R.S. is now working with a former U.N.-security officer to improve its procedures. That officer told him that he had seen “too many colleagues dead because some small rules weren’t followed.” According to Father Balleis, however, that new security measures would not mean hiring armed guards or escorts for J.R.S. programs or officers. “That’s not our way,” he said. “We are very much a grassroots organization, very much community based in general. The community is our best protection.

“For us it is not to have armed guards, to go that road, but to be more careful of a lot of small daily things in order to reduce the risk.” Eliminating all risk, he added, was impossible of course. “There are situations where all the preparation in the world doesn’t matter.”

Father Balleis added, “The one reality is that humanitarian work is much more at risk now than before, and church personnel, humanitarian workers, are not respected [anymore].” Because of the increasing threat to humanitarian workers in conflict zones, Father Balleis expects J.R.S. to rely even more on local collaborators who know the players and the regions best. A day to day reality of J.R.S. efforts is that “most of the work is done by local staff … I have often said our drivers are our best security officers because they know what’s going on.”