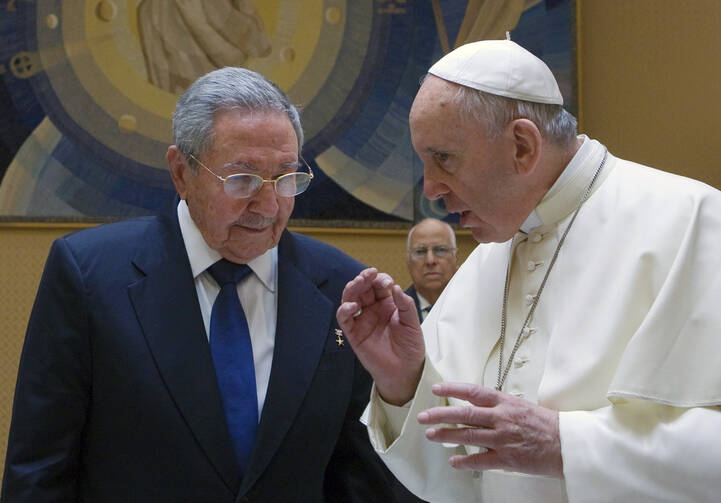 Pope Francis and Cuba's President, Raul Castro conversed together, alone, in a very cordial way for 55 minutes, an unusually long time given that they didn't need interpreters.  "Bienvenido!", Francis said as he welcomed the President on his arrival. Castro responded, "Thank you very much, it is an honor!"  Later Castro revealed that he told the Pope: “If you continue talking like this, sooner or later I will begin to pray again, and I will return to the Catholic Church.”

As he left the audience around 10.30 a.m., Castro briefly saluted the reporters waiting outside and told them, “I wanted to thank the Holy Father for the active role he has played in favor of improving the relations between Cuba and the United States” and also to present “the feelings of the Cuban people” as they wait and prepare for his visit to the island in September.

The meeting took place in the papal studio at the side of the Paul VI audience hall, and the Vatican spokesman, Fr. Federico Lombardi S.J., informed reporters that it was “a very cordial” face to face meeting. Castro had flown to Rome from Moscow where he had attended the 70th anniversary commemoration of the end of the Second World War, and prior to that he had been in Algeria.

After leaving the Vatican he went for a meeting with Italy's Prime Ministe, Matteo Renzi, and afterwards, at a joint press conference, the Cuban leader described his long conversation with the first Latin American pope as “very pleasant indeed.”

“I came out (of the meeting) very struck by his wisdom, his modesty and all the other virtues that we know he has”, he said.

“I told him that in Cuba, the leadership group and I, read all his speeches every day”, the 83 year-old Cuban President, and then revealed that he told Pope Francis, “If you continue speaking like this, sooner or later, I will return to prayer and I will return again to the Catholic Church. I am not joking.”     Seeing the surprise on the face of the reporters, he added, “I may convert again to Catholicism, even though I am a Communist.”  He recalled that for a long time one could not be a member of the Cuba Communist Party, if one was a Catholic, but he said this is no longer the case.

“Pope Francis is a Jesuit, and I was also at a Jesuit school”, Castro remarked.  He said he has “a priest friend, Frei Betto, who is younger than me, and I told him, ‘Frei Betto, I have heard more masses than you and when the Pope will come to Cuba I will got to his masses with satisfaction’.”   (Note:  Frei Betto is a Brazilian Dominican priest and liberation theologian).

The Cuban leader arrived at the Vatican at 9.30 a.m., with a ten person delegation that included the vice-President of the Council of Minister, Ricardo Cabrizas Ruíz, the Foreign Minister, Bruno Rodríguez e the Cuban ambassador to the Holy See, Rodney Alejandro López Clemente. While the Pope and the President talked together, face to face, in private, the Cuban delegation spoke with their Vatican counterparts: Archbishop Angelo Becciu, the ‘Substitute’ to the Secretariat of State, who was Nuncio in Cuba, 2009-2011, and the Secretary for Relations with States, Archbishop Paul Gallagher, both of whom speak Spanish fluently.

At the end of their private conversation, the Cuban President presented his delegation to the Pope, and then the two leaders exchanged gifts.

Castro gave Francis a precious medallion that he had asked to be made for the 200th anniversary of Havana Cathedral, and informed him that there are only 25 exemplars in existence.  Next, a Cuban painter, Kcho, who was part of his delegation presented the Pope with a painting inspired by Francis’ visit to Lampedusa to draw attention to the plight of the migrants and refugees, and lament the deaths of so many of them in the sea. The painting shows a cross made from different boats and, under it, a person on his knees praying.

For his part, Francis presented the Cuban President with a copy of his Apostolic Exhortation, Evangelii Gaudium (“The Joy of the Gospel”) and, looking at him with a smile, remarked, “There are here some declarations that you will like!”   He also gave Castro a medallion with an image of St Martin of Tours that shows the saint covering poor people with his cloak, and explained, “I very much like to give you this gift because it is an insight into what we have to do:  to care for (‘cubrir’) the misery of our people, and then to promote their dignity.”

Pope Francis then accompanied the Cuban leader to the door. "Pray for me!", the Pope asked Castro as the two men shook hands in farewell,  Castro responded, "And you too, pray for me!."  Then he got into his car and waved goodbye until September when the two men will meet again in Cuba.