Crossing a divide between police and community in Chicago: “What Then Can Be Done?”

Crossing a divide between police and community in Chicago: “What Then Can Be Done?” 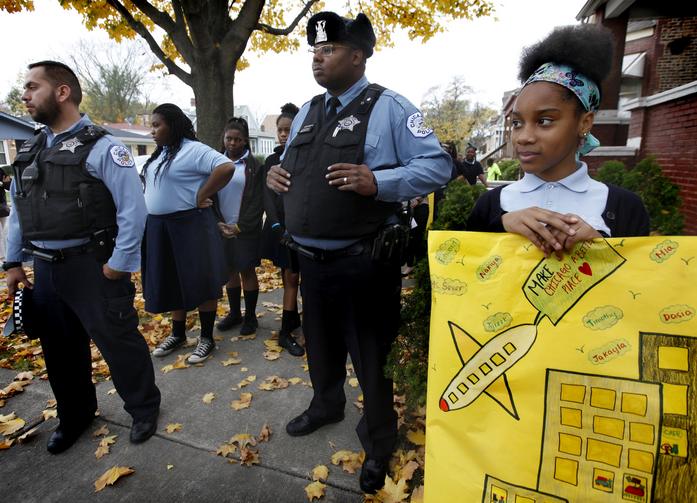 Many images stick in my mind of the public outrage expressed since Chicago police released video of one if its officers pumping 16 shots into an African American teen.

There is the one of multiracial protestors marching along Chicago’s showcase shopping district, the Magnificent Mile, linking arms in front of exclusive stories like Neiman Marcus and Tiffany’s shouting, “Laquan McDonald,” the name of the teenager who was killed, and “16 shots, 16 shots,” the number of times the officer shot him.

But the image that continues to haunt me is that of the mother of a yet another teenager shot by a different Chicago officer, saying her community doesn’t want police showing up in their neighborhoods anymore. It is a drastic state of affairs when the citizens who live in parts of the city most poisoned by crime and gang violence feel they aren’t safe around the people responsible for their protection. That must change.

It’s been a deeply troubling week for Chicago, but hopefully one that will signal a major turning point as the city addresses the simmering mistrust built up over decades between the police and the residents of many of its African-American neighborhoods. Chicago was still reeling from the shock of a nine-year-old boy’s brutal murder earlier this month when it received the body blow last Tuesday of a police dashboard camera video showing Officer Jason Van Dyke continuing to shoot McDonald, even as the teenager lay prone in the middle of a street. The officer has been charged with first degree murder.

It was another kind of “Black Friday” as hundreds of angry, grieving protesters halted traffic and blocked shoppers over the Thanksgiving weekend along Michigan Avenue, the city’s premier commercial district. The demonstrators reminded all of us that there’s a lot more at stake in this city right now than commerce. It wasn’t just the shocking content of the video recording that ignited their outrage. As with many a tragic event, it’s the suspicion of a cover up that’s just as disturbing as the triggering incident.

To be sure, a rush to judgment at this point, no matter how overwhelming and damning the evidence looks, would be just as irresponsible as the city’s efforts to keep this video hidden. Officer Van Dyke deserves to be tried in a court of law, not on social media. As his attorney pointed out, police were responding to a report that McDonald was breaking into trucks in a parking lot on the city’s Southwest side. When squad cars pulled up, he was brandishing a three-inch knife, which police say he had used to slash a tire on a police car. Traces of PCP, which can cause violent and erratic behavior, were later said to be found in his blood.

What is so wrenching, however, about this video is that McDonald appears to be walking away from police when Van Dyke jumps out of his police van and fires the first shot. Van Dyke continued to fire even after McDonald slumped to the pavement, struck by bullets in the chest, legs, arm, neck and scalp.

Still unanswered is why the Chicago police, with the backing of Mayor Rahm Emanuel, kept this footage from the public for more than a year after the shooting took place, and after the city had paid a $5 million settlement to McDonald’s family—without a lawsuit being filed. It was a judge’s order that finally forced the video’s release, in the wake of a reporter’s Freedom of Information Act request. And still unexplained is why Cook County State’s Attorney Anita Alvarez waited until the tape was about to be released before announcing the murder charges against Van Dyke, a 14-year veteran of the force.

One can only speculate as to why the city kept this video hidden for so long. It’s been noted that Emanuel was in a tough reelection battle with a popular Hispanic opponent. He likely didn’t want to fan flames of racial unrest just months after violent protests overwhelmed Ferguson, Mo., following the fatal shooting by an officer of an unarmed black teenager. Alvarez too was likely anticipating a tough reelection campaign next year for a third term.

These underlying feelings of mistrust have prompted several black leaders, pastors and community members to demand a federal investigation of the Chicago police department, similar to the one conducted in Ferguson after the death of Michael Brown. Some of them are also calling for Emanuel, Alvarez and Chicago Police Superintendent Garry McCarthy to resign.

It’s understandable that these feelings are boiling over. Chicago police have had a regrettable history, including allegations of torture, which caused the city to pay out about $500 million in damages over misconduct charges. The officer who shot McDonald had 20 citizen complaints filed against him in his 14 years on the force. Most were excessive force allegations, and one was for allegedly using a racial slur. In none of the cases was he disciplined. After the McDonald shooting he was placed on desk duty.

Tolstoi, surveying the troubled ghettos of Moscow famously asked, “What then can be done?” This is the question now facing Chicago. A first step forward would be to acknowledge there has been a long-standing problem with policing in minority neighborhoods that did not begin with the McDonald shooting. That there is fault on both sides of this divide. Yes, police have been guilty of misconduct in the past. And yes, gang members, drug dealers and other criminals make life a living hell for the police and the thousands of decent people in live in many predominantly African American neighborhoods. And yes, both sides need to begin talking to one another—directly.

“It is coming to a point in time when we have to do something different, new and innovative,” says Cook County Circuit Court Judge Colleen Sheehan, who hears juvenile cases. Sheehan and a few other forward-thinking Cook County judges have been turning to alternative methods of conflict resolution in cases that come before them. One of those methods is the Peace Circle. The Peace Circle is an idea as old as the Quaker religion and has roots as well in Native American spirituality.

Peacemaking circles create safe, controlled environments for adversaries to come together, learn about each other and tell each other their stories. They come together with the support of neutral members of the community who are there to facilitate dialogue, address trauma, foster understanding and ultimately a arrive at mutually agreed-on resolution and hopefully strengthened relationships.

Father David Kelly, a Precious Blood priest from Chicago’s Back of the Yards neighborhood, has led Peace Circles for court-ordered defendants. He says they are built on the twin pillars of “hospitality and radical accompaniment.”

It may sound naïve to propose inviting invite police and angry community leaders, police and suspects into peace-making circles. But is it any crazier than what is happening on Chicago’s streets, where a nine-year-old was killed and an 11-month year old shot in gang-related violence in just the past two months? Where more than 400 people have been murdered and more than 2,700 shot so far this year? Where the alleged motive of the suspect arrested for the nine-year-old’s murder is said to be his rage over the death of his brother and wounding of his mother in yet another gang-related shooting?

Laquan McDonald’s death did not occur in a vacuum. It came at the end of a short life that seemed all too destined for tragedy. At the age of three, he was taken by the Department of Children and Family Services from a mother who neglected him. He was returned home, but at the age five, had to be removed again after being beaten by his mother’s boyfriend. He was sent to another foster home before being taken in by a great-grandmother who gave him some semblance of stability. She died when he was 15. Less than a year later, McDonald was picked up on his first charge, for possession of marijuana. He spent five months in juvenile detention. At the time of his shooting, McDonald had been attending an alternative school for 16 to 21 year olds and seemed to be doing better.

It is time too for judges, child and family service workers, police, pastors and community leaders to recognize the root causes that lead a young person like McDonald who has known so little security to die in a hail of bullets.

Chicago’s healing won’t start unless all of its citizens recognize they have a stake in confronting these matters, no matter what neighborhood they live in. Stories like what happened to McDonald tend to fade from the news after a while. But this time, those who love this great city—myself included—can’t afford to remain mere spectators. Nor can we afford, after a time, to avert our eyes from the misery of too many of its people. What then can be done, indeed?

Tolstoi offered the people of his time a good first step. “In the name of God,” he wrote, “Stop a moment, close your work and look around you.”

Show Comments (
2
)
Comments are automatically closed two weeks after an article's initial publication. See our comments policy for more.
Richard Murray
4 years 2 months ago
It should be abundantly clear to all that Rahm Emanuel is corrupt. He needs to resign as mayor of Chicago, or be removed by due processes of the law.
Richard Murray
4 years 2 months ago
And when Emanuel is gone, we should reopen the scores of inner-city schools and health clinics that he shuttered and closed.
Advertisement