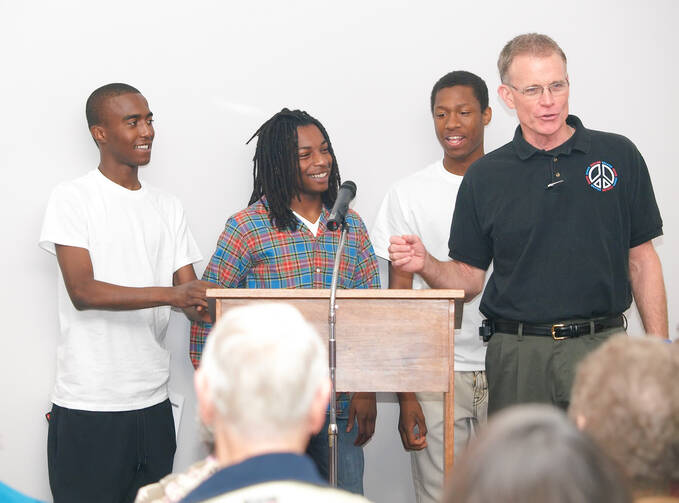 The U.S. continues to incarcerate more youths than any other country in the industrialized world. There are an estimated 70,800 juveniles in correctional facilities, according to the most recent statistics available. That’s more than the populations of several state capitals, including Annapolis, Dover, Bismark and Harrisburg, to name a few.

Still, violence involving youth remains an intractable problem. In a previous post, I wrote about my own city, Chicago, which is on track for experiencing one of the bloodiest years in recent decades, due in large part to youth gang violence. In just the past two months, an 11-month old was wounded and a nine year old shot to death in apparent gang-related incidents.

A 2011 report by the Annie E. Casey Foundation, “No Place for Kids: The Case for Reducing Juvenile Incarceration,” lays out the reasons why incarceration largely fails to reform young offenders. Youths who spend time in prison have higher rates of recidivism than those placed in alternative programs, are less likely to return to school after their prison time, and less likely to find jobs.

Those findings were supported by a recent analysis of the Cook County juvenile justice system by the Mansfield Institute at Chicago’s Roosevelt University and the Institute on Public Safety and Social Justice at the city’s Adler University. According to that study, pushing teenagers into the penal system disrupts their connection to school, particularly their ability to receive special-education services; adds to mental health issues they might have, increasing their risk of suicide; and increases their acceptance of criminal thinking.

“Furthermore,” the study notes, “participants identified the paradox of not being able to receive any preventative services for themselves and/or their children without first becoming involved with the [criminal] justice system.”

Then there is price tag attached to incarceration. It costs an estimated $66,000 to $88,000 to house a young person in a correctional facility over nine to 12 months—far more than costs to attend many a public university for a year.

But there is also reason for hope. The rate of youth confinement has been declining. The number of juveniles in jail is down more than 30,000 from a 1995 high of 107,600. That is due in part to efforts to seek new, innovate responses to delinquency that are more humane and cost-effective, especially for non-violent and first-time offenders.

One of the consistent voices for change has been Father David Kelly, a Precious Blood priest who’s served as the chaplain at the Cook County Juvenile Detention Center for more than a decade. Kelly is a leading proponent of a concept called “restorative justice.” It’s an approach that includes bringing perpetrators and victims together, and involving their families and community in a joint effort to repair the harm done by a crime.

Kelly runs the Precious Blood Center in Chicago’s Back of the Yards neighborhood, a place swarming with gang members. It is also the neighborhood where that 11-month old, his mother and grandmother were killed in a crossfire last October. The center represents the kind of restorative justice “hub” that Kelly would like to see established in Chicago’s most crime-ridden neighborhoods.

“We’re not just people doing nice things,” Kelly says. “This is about building relationships with kids and families who feel disconnected. It’s about radical hospitality and accompaniment.”

Restorative justice hinges on certain pillars. It requires community members to take the lead in creating safe and welcoming spaces within neighborhoods. It calls for building, restoring and strengthening relationships; promoting a youth’s sense of connection and belonging to a community; and engaging in peacemaking efforts.

As a detention center chaplain, Kelly isn’t naïve. He’s ministered to enough youths awaiting trial on murder, armed robbery, and felony assault charges to know that incarceration might be necessary in some cases. Still, Kelly’s efforts to seek alternatives is gaining support even among some county judges. Veteran juvenile court Judge Colleen Sheehan says she supports a proposal to form restorative justice community courts for offenders who are18 to 24-years-old. Offenders in that age group currently have fewer alternative options than juveniles.

“There is no one size fits all solution,” Sheehan told me recently. The courts, she adds, need to look for innovative ways to address crime “or we’re going to become irrelevant.”

One of the foundations of Kelly’s restorative justice center is the “Peace Circle.” Such“circles” for conflict resolution have their roots in both Quaker and Native American spirituality.

In one case referred by a juvenile court judge to Kelly’s Precious Blood Center, a youth we’ll call Dontae was charged with home burglary. As the circle leader, Kelly says he visited Dontae and his mother at home, explaining that at the center, they would be required to literally sit in a circle and face the person whose home had been burglarized. They agreed.

“Both Deontae and his mother said that what they really wanted to do was to apologize for what he did,” Kelly recalls.

On the day of the circle, refreshments were served. The man whose home was burglarized seemed more anxious and angry than he had been in agreeing to participate. The circle also included a retired school principal, a local coach, two other youths and a woman active in the neighborhood.

“Once all were in the circle, we began with a poem, and check-in, asking how they were in coming to the circle.” Kelly says. A ceremony followed in which each person took a strand of ribbon and was asked to think of someone who had been a mentor to them and share that with the rest of the circle. Each tied their strand of ribbon to another’s until all the ribbons were connected.

“We got up and placed the ribbon circle in the centerpiece as sign that we are who we are because of those we had in our lives,” Kelly says. Over the course of the sharing, Dontae and the man he had burglarized learned that their mothers had both been their main mentors. Both had grown up in the same vicinity and had absent fathers.

“Little by little, people spoke, not to the issue of the burglary, but of themselves,” Kelly recalls. “People began to lean in and engage one another in a more intimate way. In the beginning [the victim] sat back with arms crossed as if saying, “So tell me something I don’t already know.” But after hearing from others—especially Dontae—he began to lean in and engage others.”

When it was time to speak about the crime that had brought them together, the burglary victim said what really angered and hurt him wasn’t that a window was broken and some of his possessions were taken, but that his five-year-old son said to him afterward, “Daddy, I don’t want to live here no more.”

“What he had vowed as a father, to protect his son and give him a home that was safe, was taken from him with the burglary,” Kelly says.

Dontae explained that in participating with the burglary, he wanted to look tough in front of some other teens, so went along. He tearfully apologized to the victim. Dontae’s mother spoke about being embarrassed by her son. She said she worried every time he left the house what might happen to him.

Finally, when asked what was needed to repair the harm done, the man whose home was burglarized said there was one thing Dontae could do for him. “I need you to go to school,” he said.

Dontae had been expelled from school and his mother’s efforts to get him into another school had failed. The retired school principal who was part of the Peace Circle said she could help get Dontae back in the classroom.

The man who had been burglarized gave Dontae his card with his phone number on it. He offered to accompany Dontae, a basketball lover, to a local gym sometime to play ball.

“The circle ended with Deontae being mentored by the victim,” Kelly says. Dontae did return to school and seems to be doing well. Members of the circle are required to continue to check in with him for at least six months.

Kelly has accumulated a set of comments youth offenders have made about their Peace Circle experiences. Here are a few:

“It is a place where you can be yourself. I hear people in here in the circle talk about things they would never talk about in the streets. They let their guard down and are kinda more soft—in a good way.”

“Circles let me get things off my chest. I can come to circle and talk about my problems and then I don’t have to think about them so much.”

“Once I was really upset and was about to get into it with someone, but I remembered that I had a circle that night. I knew I could talk about it there, so I walked away.”

Restorative justice Peace Circles aren’t the solution. But they are a part of the solution. They are a lot less expensive and complicated than incarceration. Sometimes the best solutions are the simplest ones.

See also: Crossing a Divide Between Police and Community in Chicago

Judith Valente, a regular contributor to NPR and "Religion and Ethics Newsweekly," is America's Chicago correspondent. This is the second of a two-part series.

Judith Valente
@JudithValente
Show Comments (
2
)
Comments are automatically closed two weeks after an article's initial publication. See our comments policy for more.
Richard Murray
6 years 8 months ago
Wow! Fr. David Kelly is a great hero. Judge Sheehan seems quite sharp too. Thank you for an uplifting article!
Richard Murray
6 years 8 months ago
Regarding the situation of things in Chicago: It should be abundantly clear to all that Rahm Emanuel is corrupt. He should resign as mayor of Chicago, or be removed by due processes of law. Then, when he is gone, we should reopen the scores of inner-city schools and health clinics that he has shuttered and closed. That will help Chicago immensely.