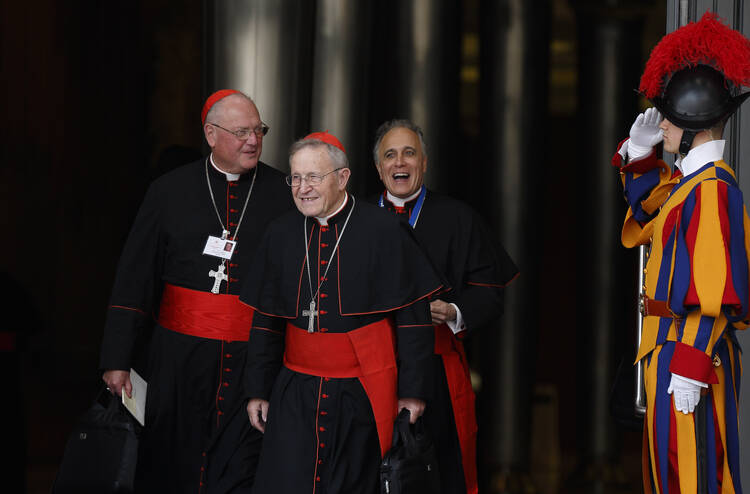 Cardinal Timothy Dolan has provided some important background information on the letter that he and 12 other cardinals sent to Pope Francis on Oct. 5, the opening day of the synod. He revealed that the idea of the letter came from Cardinal George Pell, in a conversation with other bishops as they shared “some worries” about the synod before it started. During that conversation, he said Pell summarized the concerns of the group in three points: the synod’s working document ("Instrumentum Laboris"), the process and the composition of the 10-person special commission set up by the pope to draft the synod’s final document. Dolan said the letter with these concerns was subsequently written in Italian, and he signed it.

The New York cardinal revealed all this information in a radio interview with Mary Shovlain, host of ‘The Vatican Report,’ on the Catholic Channel of Sirius XM News and Issues, Oct 13. (Link below)

He told her that when he arrived in Rome for the synod, “there were a number of bishops, one of whom was Cardinal George Pell, whom I respect very much, and we were chatting about a couple of concerns that we had.” And, he added, “George said...why don’t we get together –  we love the Holy Father, we trust him, he’s urged us to be honest with him as possible – why don’t we write [to] him that we’re worried. We’re worried, first of all about the "Instrumentum Laboris" [Note: the synod’s working document] which has a lot of good things, but we’re kind of worried if that’s the only document that we’re going to be talking about at the synod. Secondly, we’re a little worried about the process: there seems to be some confusion. And, thirdly, we’re a little worried if we could have a say in the people who are going to be on the final drafting committee.”

Then, Dolan added, “Cardinal Pell, in his good shrewd way, said: 'Am I correct in summing up some of the concerns?’ And some of us, myself included, said ‘that seems good enough to me, if you have a letter to the pope count me in.' And sure enough I signed it.”

“The letter wasn’t in English, it was in Italian,” and it was written “even before the synod began,” Dolan stated. He made clear that on “the day after it went in, the Holy Father, very sensibly, at the beginning of the next day [Oct. 6], he didn’t refer to the letter but he said, hey everybody, I’ve heard from some of you that you’ve got some concerns.” And then “he (the Holy Father) listed the exact concerns that I’ve just mentioned... and he said, ‘let me try to respond to that.’”

Dolan confided to the interviewer that at this point, “I said, here you go, Holy Father, you told us to be honest and we were. You’ve answered right to these [concerns]. I’m grateful you paid attention. So let’s get on with the work.”

The cardinal told the interviewer: “I’d forgotten about it, and I didn’t think it was controversial at all,” but then he heard that “somebody’s leaked it, and there are various versions who signed it.” He confessed, “I don’t know all about that stuff!”