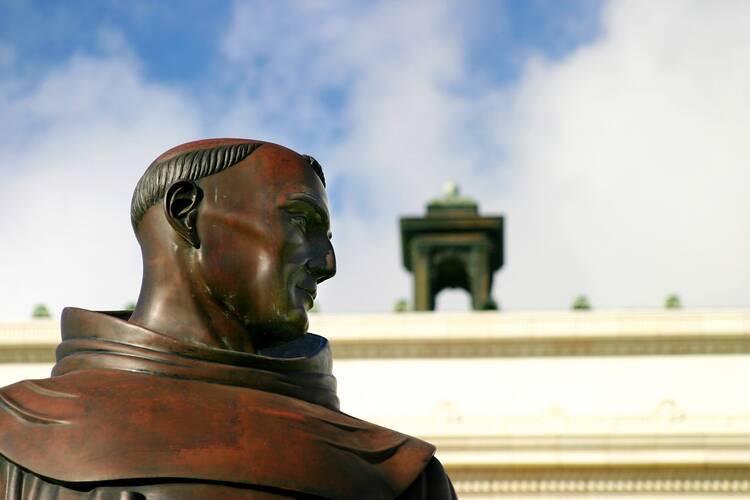 For the church in California, perhaps the most important part of the pope’s visit will be the Washington, D.C., canonization of Junípero Serra, the Franciscan friar who from 1769-84 traveled with Spanish military up and down our West coast, starting the Catholic missions that would form the basis of much of modern day California.

In his 15-plus years forming faith communities for native people, Serra traveled thousands of miles, sometimes walking on a severely ulcerated leg. His zeal and commitment were remarkable and irrefutable. But so, too, are the costs of the Spanish occupation for the native tribes who found themselves the victims of its corporal punishment, cultural paternalism and diseases.

In these next few weeks, many Catholic figures from all around the coutnry will be asked to reflect on that complicated set of circumstances. If I had their ear, here’s the advice I would give them.

Given the fact that the Catholic Church is canonizing Serra, there is a ready impulse to challenge or redirect comments critical of him or the missions. And that’s not without justification; Serra’s treatment of native peoples was far better than the Spanish soldiers who traveled with him, let alone the Europeans on the East Coast. It is widely agreed among historians that he was not personally responsible for violence of any kind, in fact at times he protected natives from being killed by soldiers. And while his views of native peoples were clearly paternalistic from a modern point of view, his care for them is also obvious. Always and everywhere his concern was to enable them to find salvation.

But the missionary work of Serra exists within a broader historical context of what is mostly devastation. Half of all native peoples in California died from diseases brought by the Spaniards. Many if not most native cultures were programmatically wiped out. More generally, no matter what good Serra and other missionaries to North America did, it is without question that native people would have been far better off had Europeans never shown up in the first place. Around the world European “settlers,” including Catholic missionaries, have been directly and indirectly responsible for the extermination of tens of millions of people and hundreds of cultures that is will never be seen again.

The canonization of any missionary today cannot help but bring up these sorts of issues. (Just yesterday, NPR's Morning Edition did a piece on these questions in light of Serra's pending canonization.) To the extent that we try to defend ourselves or steer the conversation away from the facts of history or the grief and frustration of native people, we likely only confirm the fears that people have that, when push comes to shove, the church is really just interested in itself.

This July in Bolivia, Pope Francis offered this statement about the treatment of indigenous peoples:

Some may rightly say, ‘When the pope speaks of colonialism, he overlooks certain actions of the Church.’ I say this to you with regret: Many grave sins were committed against the native people of America in the name of God. I humbly ask forgiveness, not only for the offences of the Church herself, but also for crimes committed against the native peoples during the so-called conquest of America…. There was sin, a great deal of it, for which we did not ask pardon. So for this, we ask forgiveness, I ask forgiveness. But here also, where there was sin, great sin, grace abounded through the men and women who defended the rights of indigenous peoples.

People speaking to the press would be well served to begin their comments with similar acknowledgements. Some of it might seem far afield from the actual facts and circumstance of Serra's ministry. But lacking that sort of honest assessment of U.S. history and our role in it, it will be very hard for most people to hear anything else we have to say.

2. A Corollary: Don’t Feel the Need to Justify Past Mistakes

Corporal punishment may have been an approved form of remediation in the Spanish world. Serra may have demanded that Native peoples leave home because he thought it essential to their salvation. If you were writing an academic paper or had an hour with an audience, such details would have an important place.

But whether we like it or not, the same is not true in our sound bite media culture. And frankly, defending these sorts of issues doesn’t make any sense to people. Better to just leave it at this: Serra was a man of his times, and as such he did not go about his mission in a perfect way. Neither he nor the Spaniards valued Native cultures and peoples in the ways we know today they should have. And that’s a tragedy that we mourn, even as we recognize that he and his companions were very much trying to do real good in an extraordinary way.

Pope Francis has taken to labeling Serra one of the “founding fathers” of our country. It’s a way of indicating his importance in the overall history of the nation, and of highlighting that the early history of the United States is more than the history of the East Coast. Which God knows it is. (East Coast, come at us.)

But the term only invites problems. North America was not an empty continent waiting to be “found.” And to speak of European settlement as a “founding” either ignores or obscures the many innocents whose bodies lie buried beneath our country’s foundations.

Also, here in the United States “founding father” does not refer to settlers anyway, but to the small group of political leaders who achieved independence—people like Washington, Jefferson and Franklin.

The impulse to highlight Serra’s significance is a good one. But let’s use the right terms, the best ones we can. Serra was central in the early development of California. He had the kind of significance for the Western United States that we ascribe to a John Winthrop or William Penn. That's what we should say.

4. When You Feel the Urge to Start Talking about Native People or History, Think Again

Listening to most Americans talk about the histories and cultures of native peoples is like listening to most Catholics talk about the sacraments. No matter what our level of education, our information is usually still just the stuff we learned a thousand years ago in grade school. And yet often we feel terribly confident in that knowledge.

As a Jesuit scholastic I spent three and a half years as an English teacher working on the Pine Ridge Indian Reservation in South Dakota. The kids I taught knew hip hop as well as their inner city peers. They wore Air Jordans and spent way too much time late at night on social media. And much to the surprise of every white person that has ever asked me about them, their families lived in trailers and houses, not tipis.

With rare exceptions, non-native Catholic leaders opining on things like “life on the rez” or “the former nomadic life of native peoples” more often than not only reinforces bad information. It also perpetuates the marginalization of native voices. If the press wants to talk about native life and history, there’s no need for us to repeat the lecture we heard in fifth grade. We can connect them to Native Americans and historians who can speak from actual knowledge and experience.

5.  See this Moment for the Opportunity It is, and Seize It

When was the last time you read a story about Native American people? Or saw a presentation of their life that was more complicated than alcoholism and/or casinos?

In point of fact, the rich and complicated tapestry that is native life in this country is mostly hidden or ignored. What few stories do circulate come not from those communities, but as largely oversimplified (or overheated) interventions of the mainstream press.

If there is an opportunity that this canonization has to offer, it is the chance it gives the church in the United States to reach out to native peoples in a new way, to make their needs and cultures more a part of our faith communities and our American life.

In Rapid City, S.D., and Spokane, Wa., then-Bishop Blase Cupich created protocols to create avenues for listening and inclusion of native voices in those dioceses. There is no reason that every diocese in the United States with a native population—and most have one—could not make similar efforts, and more generally that our U.S. Catholic Bishops’ Conference could not take this moment to explicitly extend our hands in apology and friendship.

And also gratitude: both in California and elsewhere in our country, it is native people who actually built our early churches. In this very concrete way their communities impacted and enabled early Catholic faith. Truly, there is no Saint Serra without them.

In 12 days Junípero Serra will be canonized for his devotion to God and his genuine if imperfect care for native people. If we want to demonstrate his impact on our American church, let us seek to follow his example. Our church and our country will only be the richer for our effort.

Jim McDermott
@PopCulturPriest
Show Comments (
1
)
Comments are automatically closed two weeks after an article's initial publication. See our comments policy for more.
Tim O'Leary
6 years ago
"it is without question that native people would have been far better off had Europeans never shown up in the first place." - so Jim McDermott's view is it would be better for a people to live without any opportunity for hearing the Good News, or for receiving the saving grace and the sacraments. There is something deeply wrong with a worldview that thinks it better to prevent a whole continent of people, for centuries, to live in spiritual darkness and remain outside the evangelical desires of Jesus. to see how preposterous this is - extend this preference to the whole world, for there were originally only indigenous peoples everywhere.