Bishop Braxton on a Persisting Divide Uncovered in Ferguson

Bishop Braxton on a Persisting Divide Uncovered in Ferguson 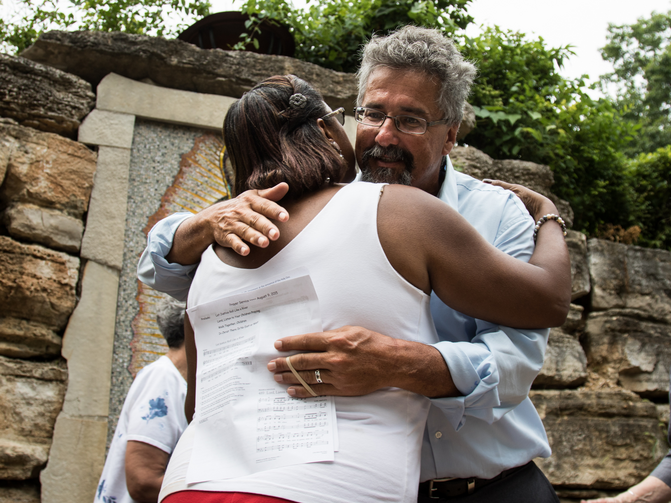 Ferguson, Mo., took a tentative step closer to normalcy today after nearly a week of protests commemorating the death last year of Michael Brown. Some tense standoffs between police and demonstrators and an exchange of gunfire that left one teenager wounded and facing felony charges had led to an emergency declaration earlier in the week.

“After reviewing the events of the past four evenings under the state of emergency, I am pleased to report our law enforcement officers have established order while preventing further acts of violence in Ferguson,” he said in a statement. “Local law enforcement will remain vigilant, and officers are prepared to respond swiftly if necessary.”

Around the nation, other commemorations of Brown’s death at the hands of Ferguson police officer Darren Wilson were conducted without incident. But even as this unhappy anniversary was observed a new police killing of an unarmed African American teen, this time in Arlington, Tex., suggests that the issue of the police use of force, particularly in African American communities, will continue to be a source of tension.

These incidents, which have shocked the nation out of a kind of post-racial complacency, compelled Belleville, Ill., Bishop Edward Braxton to issue a pastoral letter on race. The diocese subsequently created a study guide to lead parishes to reflect on the problem of the nation’s persisting divide. (Some of the bishop’s thoughts on the issue were published in America, “All the Angels and Saints,” March 9, 2015.)

Bishop Braxton says he tries to approach such incidents, which he describes in an e-mail as “sad and tragic events…that are intensifying the racial divide,” as analytically as possible. There are, he says, “more than enough emotions about these events.”

Bishop Braxton has been following the investigation and arrest in Waller County, Tex., that led to the death of Chicago resident Sandra Bland. Like millions of others, he watched the video of her arrest with increasing unease.

“The people who say they were shocked by the video of her arrest obviously have not seen and heard what I have seen and heard since I went to the wake in Chicago of 14 year old Emmett Till, who was murdered in Mississippi in 1955,” he writes in an e-mail. (Bishop Braxton shared his thoughts in e-mail responses with America and the National Catholic Register—where a complete interview with him will be published.)

“I can only say that I am grateful that a video of the encounter exists. We may never know what exacerbated what should have been a minor incident into such an intense verbal confrontation. Some have concluded it was Ms. Bland’s refusal to extinguish her cigarette. The aggressive, angry, crude language of [Trooper Brian Encinia] was certainly completely unprofessional.

“She did not have a weapon,” Bishop Braxton points out, “she was not threatening the trooper. She is heard asking why she is being asked to leave her car. The manner in which she was treated was almost violent.

“Of course the question that remains unanswered is this: ‘Is there a connection between the manner in which she was treated, her possibly fragile emotional state and her presumed suicide?’”

Often interpretations of encounters between law enforcement and members of the African American community that end in apparently capricious use of authority or a questionable death can be starkly different along racial lines. Bishop Braxton says a gulf in experience and the absence of relationship are at the heart of that difference in perception.

He explains many white Catholics in America belong to parishes with few to no African American members; many live out family and friendships, lives and sacraments in complete isolation from the everyday realities of African Americans. “For the most part, many African-Americans and many European-Americans have completely different world views.”

Bishop Braxton, a Chicago native, has long lived on the sharp edge of those different world views. His parents had converted to Catholicism, and growing up as one of the few Catholic African American families offered sometimes isolating and painful experiences. As a seminarian he was dealt his share of petty humiliations because of his race. He suggests many contemporary Catholics would be astonished by the overt systemically racist practices within the church in its recent past.

Bishop Braxton says he cannot say if the numbers of deadly encounters between white police and African American citizens has significantly increased or not—in fact reliable statistics on this possibility have not been maintained by the F.B.I. But “what has increased is the speed with which the word is spread far and wide and the speed with which opinions are formed, positions are hardened, rage is ignited,” he says. That is owing to the bane or blessing of today’s social media. That phenomenon may be distorting social truths, he says, or it could be that it is shining a bright light “on terrible social realities that have been long denied or kept in the shadows.”

Catholic people, he says, like other Americans, have reacted in a variety of ways to the deaths or mistreatment of African-Americans in altercations with white law enforcement agents. For some, these troubling events are simply another fleeting news item that has no direct impact. “The participants are not their friends or family members. It is not their neighborhood,” Bishop Braxton says.

Some express “anger and frustration about the cries of ‘white racism,’ the criticism of the police, the attack on the judicial system, the disruption of normal life by protesters and the destruction of property by vandals.” These white Catholics have told the bishop slavery and racism “are things of the past,” that “protesters should stop complaining, obey the law, follow the orders of the police, pull up their pants, get a job and get on with their lives.”

“But,” he says, “there are still other Catholics who are profoundly distressed. They feel that they were naïve in thinking the era of racial conflict was behind us. They are upset by the attitudes and comments of some of their Catholic neighbors.” These are the people, who “concluding that there is systemic racial prejudice in American society that is morally wrong,” he expects to see joined in peaceful protest making the simple claim that #BlackLivesMatter.

Show Comments (
1
)
Comments are automatically closed two weeks after an article's initial publication. See our comments policy for more.
alan macdonald
4 years 7 months ago
Black lives matter? The abortion rate among urban blacks is approaching 70%, so the sincerity of this movement is questionable.
Advertisement