From gun control to euthanasia, what Catholics are saying about this fall's ballot measures 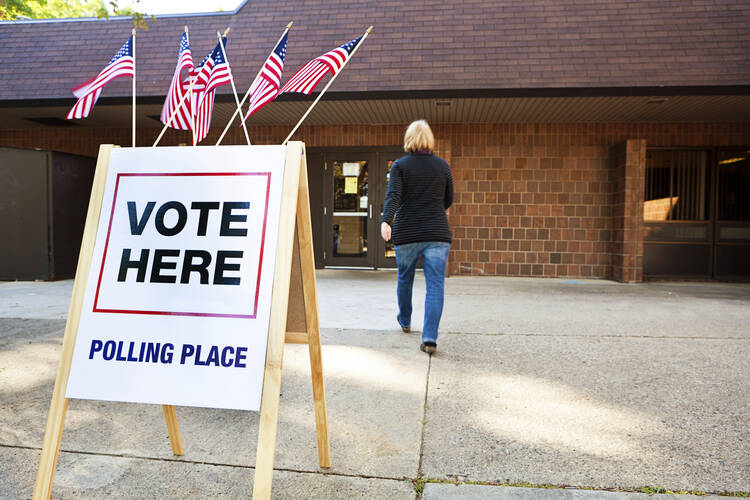 With the twists and turns of the race for the White House sucking up all the election air, you could be forgiven for thinking the only contest is between Donald J. Trump and Hillary Clinton. There is, of course, the fate of Congress, which could swing back to Democratic control. But there are also ballot questions in several states that could have a more of an impact on the day-to-day lives of many Americans than which New York millionaire moves into the White House.

According to the election tracking website Ballotpedia, 26 states and the District of Columbia allow voters to consider issues at the ballot box, either through binding referendums that then become law or voter vetoes of bills passed in state legislatures. Supporters of such measures say they are the truest form of democracy. Critics, however, contend that ballot measure are often confusing, unwieldy and in the end make governing more difficult.

Regardless, come Nov. 9, a range of issues will have been decided from Maine to California. Here’s a look at some of the ballot initiatives and what the church teaches on the issues as Catholic voters head to the polls.

Marijuana up for a vote

Voters in at least 10 states will decide if marijuana should be legalized, either for medical or recreational use. Arizona, California, Maine, Massachusetts and Nevada will vote on legalization, while Arkansas, Florida, Montana, North Dakota and Oklahoma voters will consider making the plant available for medical use.

In some Catholic circles the debate about the decriminalization of marijuana has focused on the effects that drug laws have on communities of color. Advocates for legalization say that too many non-white Americans are imprisoned for minor drug offenses and that changes in state and federal laws could ameliorate some of the injustice.

But Catholic bishops in Arizona came out against legalization earlier this year, writing tha tmarijuana use leads to negative outcomesfor society, pointing to harmful effects on children and the drug’s possible role in increased accidents.

“In states that have legalized marijuana, there has also been an increase in the use of harder drugs like cocaine and heroin since marijuana was legalized, which only further increased societal costs,” the bishops said.

Even Pope Francis has weighed in on the issue, saying in 2014 that the solution to drug problems plaguing societies is not found in decriminalization efforts.

“To think that harm can be reduced by permitting drug addicts to use narcotics in no way resolves the problem,” he said.

“No to every type of drug use,” Francis added. “It is as simple as that.”

As the battle for a $15 minimum wage gains traction in urban centers throughout the United States, some states are turning to ballot measures to seek more modest hikes—with one exception.

Voters in Arizona, Colorado and Maine are considering hiking their state’s minimum wage to $12 by 2020, and voters in Washington are considering going up to $13.50 by then.

In contrast, South Dakota, which has the lowest unemployment rate in the nation at 2.7 percent, will decide whether or not to drop that state’s minimum by a dollar, to $7.50, for workers under 18.

Catholic bishops have repeatedly called for just wages, most recently in a letter marking Labor Day, though they have generally shied away from supporting a specific figure. That will probably be the case in upcoming elections, too. (Of course, many Catholic organizations and individual activists have been involved in pushing for the $15 minimum wage.)

Sister Sharon Park, head of the Washington Catholic Conference, the public policy arm of the state’s three dioceses, said bishops in that state will meet in September to discuss the various ballot initiatives, including the question about minimum wage. She said Washington is divided between urban and rural areas, and noted that some cities, such as Seattle, have already adopted a higher minimum wage than the hike proposed in the ballot measure.

“The church has a strong position on a living wage, not just a minimum wage,” Sister Park told America, adding that the dollar amount that constitutes a living wage is open for discussion. Sister Park said Catholic voters should consider “who is being harmed and who is being helped” by specific proposals, noting that an increase in wages could help most workers—unless, of course, jobs are eliminated or hours reduced as a result.

One would levy a 10 percent income tax, paid in part by employers, to help fund universal health care in Colorado. The plan would cover all residents, including those who are undocumented.

Expanding access to health care has long been a priority of Catholic bishops, though concerns over contraception and abortion issues have tempered the church’s public support for some initiatives, including the federal Affordable Care Act.

Voters will also weigh in on legalizing physician assisted suicide, a practice that Catholic leaders have fought against for years.

Euthanasia is currently legal in other western states, including California, Oregon and Washington. Voters in Massachusetts rejected a similar proposal in 2012 after a long campaign highlighting the potential for abuse that was sponsored by a coalition that included the Catholic Church.

Catholic bishops in Colorado are opposed to both proposals.

“It’s not that we don’t believe health care is important for all people,” Jenny Kraska, executive director of the Colorado Catholic Conference, told America. “We need to strive to make sure it’s more accessible, but it’s how it would be implemented that is problematic.”

She said the current proposal relies on unelected officials to administer the program. Kraska fears that the “diverse health care needs in our state” may not be well represented.

The bishops’ opposition to both measures will be explained to parishioners in Colorado when voter guides are sent to parishes in the coming weeks.

Voters in at least five states will consider proposals to close some gun sale loopholes, including whether or not to require background checks for gun purchases currently exempt from such screenings.

Nevada, for example, will be voting on whether all guns sales must go through a licensed dealer and undergo a background check. In Washington, voters will determine if courts can place temporary bans from buying firearms on individuals who pose “significant danger.” Other gun control related measures will be on ballots in California and Maine.

RELATED: A History of Gun Control in the pages of ‘America’

Despite the political and cultural diversity of the U.S. hierarchy, calls for stricter gun control measures has been relatively consistent in recent years.

“For a long time now, the bishops of the United States have called for reasonable policies to help reduce gun violence," Archbishop Thomas G. Wenski of Miami wrote earlier this year after the Obama administration announced it would enact measures at the federal level to reduce gun violence.

Archbishop Wenski, the chairman of the Committee on Domestic Justice and Human Development at the U.S. Conference of Catholic Bishops, continued, “While no measure can eliminate all acts of violence which involve firearms, we welcome reasonable efforts aimed at saving lives and making communities safer.”

Other bishops have responded to recent spates of gun violence in their own dioceses by calling for stricter gun control laws.

In July, following the killing of five police officers, Bishop Kevin Farrell of Dallas said that civic leaders must “speak to one another and work together to come to a sensible resolution to this escalating violence.” (Bishop Farrell was recently chosen by Pope Francis to lead a new Vatican department concerned with the laity.)

In June, following the deaths of 49 people in a mass shooting at a nightclub in Orlando, Fla., Bishop Farrell noted starkly on his blog, “Our gun laws are an invitation to kill.”

“They would be ludicrous if the situation were not so tragic,” he continued.

In Chicago, where gun violence is on pace to reach levels not seen since the 1990s, Archbishop Blase Cupich has repeatedly called for stronger gun laws, most recently in an interview with U.S. Catholic magazine this week.

“There are too many guns out there in the hands of people who should not have them,” he said. “We need to have sane gun laws.”

Finally, voters in California must weigh in on a whopping 18 ballot questions, some on the same issue, with even more decisions awaiting voters in local races.

At the state level, the California Catholic Conference, representing the state’s 12 dioceses, offers a proposition analysis on each ballot measure, highlighting Catholic teaching where applicable and promulgating the views of the bishops should they decide to weigh in, as they did with the death penalty.

Earlier this summer, the bishops of California released a statement supporting the abolition of the death penalty, tying their call to Pope Francis’ Jubilee Year of Mercy.

“The Bishops of the United States have long opposed the use of capital punishment,” they wrote. “In the past, it was sometimes morally justified in order to protect society, but those times have passed.”

Perhaps highlighting the complexity of California’s referendum system, the bishops used the same statement to record their opposition to another ballot question that speeds up the state’s executions.

California voters will also have an opportunity to decide if fees generated by paper and reusable bag sales, forced by the state’s plastic bag ban, should be redirected to environmental projects. They could also also vote to overturn plastic bag ban itself. Finally, they will get to decide if actors in pornographic films should be required to wear condoms.

After noting the church’s opposition to pornograhy, the bishops had a space to offer their thoughts on that particular question: “No position.”

Michael O’Loughlin is the national correspondent for America. Follow him on Twitter at @mikeoloughlin. Wyatt Massey is an O’Hare Fellow at America.